Kyiv, July 8, 2015. Ukrainian special services detained a Russian mercenary originally from the Khanty-Mansiysk autonomous district of the Russian Federation who was fighting on the side of the so-called “LPR”, said Colonel Oleksandr Motuzyanyk, spokesperson of the Administration of the President of Ukraine on ATO related issues, during a press briefing at Ukraine Crisis Media Center. “He was convicted for a serious crime committed in the Russian Federation. Subsequently, the mercenary went to eastern Ukraine and joined the ‘Prizrak’ militant group. He later joined the militants led by a “Russian Cossack” Dryomov. His unit was conducting reconnaissance within Ukrainian force deployment zones in the vicinity of Zolote, Pervomaysk and Popasna, Luhansk region. An RGD-5 grenade, four magazines with rounds for AK-74 assault rifles and a radio set were seized when the militant was detained. 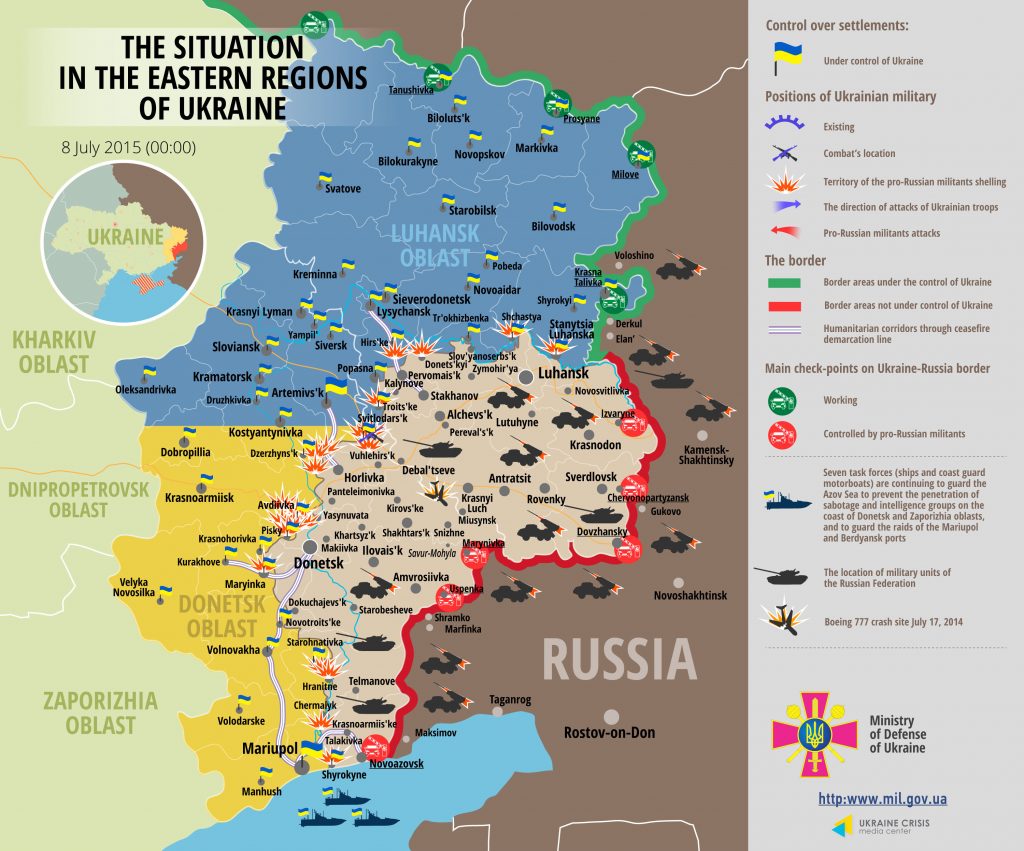 Combat actions in eastern Ukraine have intensified again: enemy attacks on Ukrainian forces have doubled. In the Luhansk sector, the situation remains tense, yet under control. Yesterday, militants intensified their activities in the eastern part of the region near Shchastya and Stanytsia Luhanska, Luhansk region. Several ceasefire violation incidents were also registered north of Pervomaysk in the vicinity of Donetsky and Zolote as well.

In the Donetsk sector, skirmishes and shelling of Ukrainian military positions continued in the vicinity of Luhanske. Ukrainian forces repelled an attack by an enemy reconnaissance group.

“From a strategic point of view, the enemy is attempting to find weak spots in our defense both from the southern and eastern directions of the Svitlodarsk agglomeration and the local power plant station,” explained Col. Motuzyanyk.

It was almost quiet in the area of Horlivka, Donetsk region. Only several minor armed provocations and several mortar shelling incidents were registered in the area of Novhorodske. At the same time intelligence information indicates that militants are conducting rotations to reinforce their contingent in the vicinity of the Horlivka agglomeration.

Maryinka was the epicenter of July 7 combat actions, where skirmishes continued throughout the day. “The situation in the airport area remains unchanged, traditionally unquiet but controlled by Ukrainian forces,” noted Col. Motuzyanyk.

In the Mariupol sector, there were powerful mortar and artillery shelling incidents of Ukrainian positions in Hranitne and Novohryhorivka. The enemy also made a series of armed provocations outside Pavlopil, using large caliber mortars and tanks. The situation on the frontlines in Shyrokyne remained stable.

Two Ukrainian troops were killed in action and ten were wounded in the last 24 hours.