Kyiv, July 9, 2015. The number of attacks by Russia-backed militants in Donetsk and Mariupol sectors has decreased, said Colonel Andriy Lysenko, spokesman of the Administration of the President of Ukraine on ATO related issues, at a press briefing at Ukraine Crisis Media Center. Ukrainian forces registered only two ceasefire violation incidents by Russia-backed militants in each of the following locations: in Luhanske and Mayorsk in the Donetsk sector, as well as near Bakhchovyk, which is located over 10 km away from the frontline in the Mariupol sector. “Militants incited two armed provocations near Verkhnyotoretske, east of the strategically important railway section Donetsk–Sloviansk, where the railway station Skotuvata is located. Pisky remains the epicenter of fighting in the area of the Donetsk airport. Enemy snipers are active there, the enemy uses 120-mm mortars,” elaborated ATO spokesman. 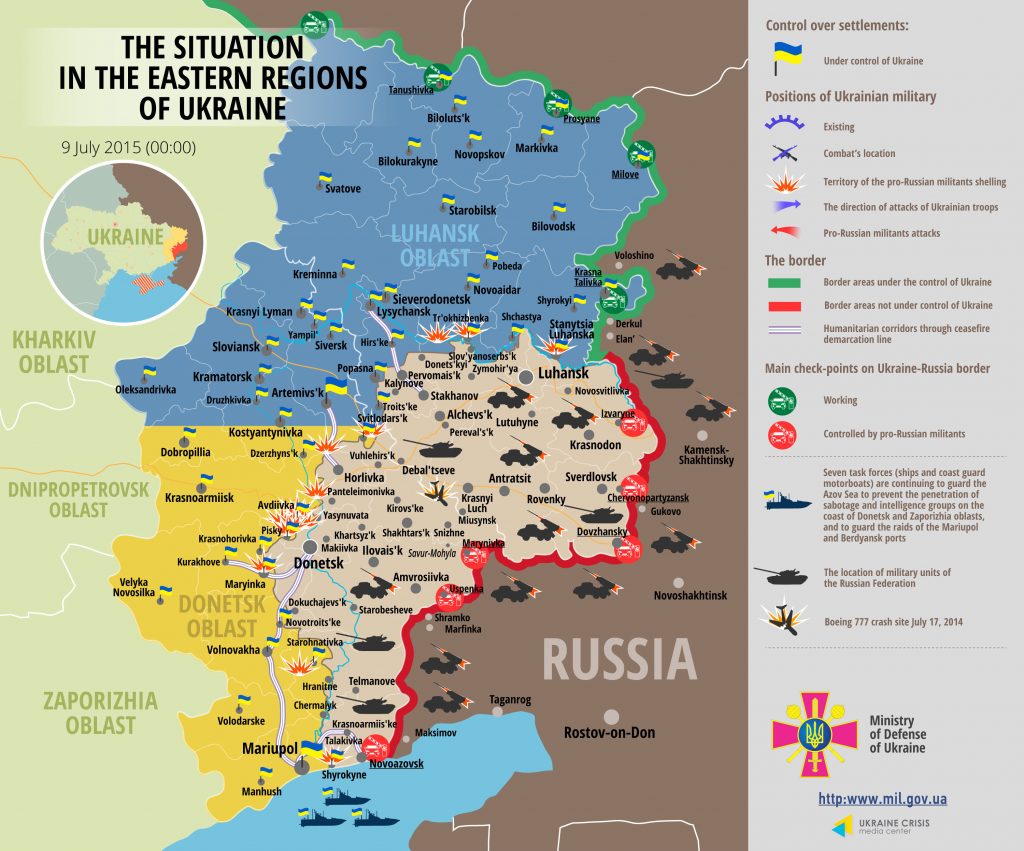 Stanytsia Luhanska and Krymske were two hotspots in the Luhansk sector. “Active skirmishes lasted throughout the day, and In Krymske the enemy deployed to combat an IFV. As a result of these attacks, infrastructure and residential homes suffered novel destruction,” noted Col. Lysenko.

Ukrainian Armed Forces did not incur any lethal casualties; one serviceman was wounded in action in the last 24 hours.

Ukraine’s Security Service, in cooperation with the Armed Forces and police, detained a man in Popasna who had been tasked by militants to commit a terrorist act. “According to the detained, militants abducted him near the combat line, threatened violence towards his family and made him agree to organize a terrorist act. The subversive was tasked to install an antitank mine in the central part of Popasna during a large public gathering. Instead, the man installed the mine at the bakery plant where he was detained and the mine de-activated,” said Col. Lysenko.

Ukrainian operatives also detained a female militant informer in Mariupol who was actively spreading anti-Ukrainian propaganda on social media. She was moderating around 500 groups on social media, reaching almost 1,5 million readers. Proof of these acts were IT equipment and electronic information storage devices which were seized when the informer was searched. “Additionally, several ammunition pieces were seized from a staff worker of a municipal company in Krasnohorivka, Donetsk region. The “mini-arsenal” included combat grenades “RGD-5” and “RGN”, a handgun and several rounds of various calibers. The man said that he found the items in question after the town was liberated by the Ukrainian army and decided to keep them for self-defense purposes,” summarized the ATO spokesman.