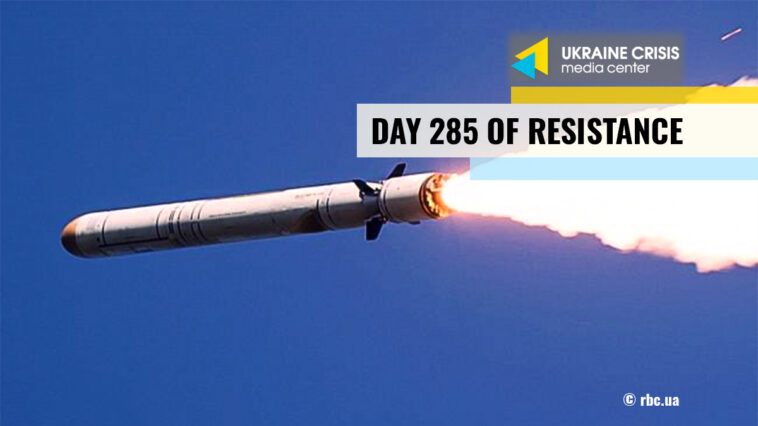 Works are underway to stabilize Ukraine’s power grid after a barrage of Russian missile attacks on December 5. Four people were killed, Ukrainian President Volodymyr Zelenskyi said in a nightly address on Monday. “Here’s a report of what happened today. [Ukraine’s air defenses] shot down most of the 70 Russian missiles that were fired, including missiles of the Kalibr and Kh-101 type. That’s the main result. I would like to thank all service members of the Air Command East (Skhid), Pivden (South), and Center. Well done!”

“I would like to thank our partners for the air defense systems that we are using. Each intercepted Russian missile proves that we can overcome terror.”

“Unfortunately, we cannot yet fully protect the sky, and several missiles hit targets. Unfortunately, there were casualties. Four people were killed in Russian missile strikes in the past day. My condolences to the families and loved ones,” Zelenskyi said. Energy workers immediately began to repair the grid, the President added.

Russia will not cede control of the Zaporizhzhia nuclear power plant as part of a deal to establish a nuclear safety zone around the plant, Russian Foreign Ministry spokesperson Maria Zakharova said on Monday.

“There can be no talk of any withdrawal of the Zaporizhzhia nuclear power plant from Russian control or transfer of control over it to some third party. The station is located on Russian territory and is fully controlled by Russia,” the spokesperson said.

“We presume that only we are able to ensure the physical and nuclear safety of the Zaporizhzhia nuclear power plant,” she added.

Zakharova denied that Ukraine and Russia near agreement to establish a nuclear safety zone, a statement that runs counter to what director general of the International Atomic Energy Agency Rafael Grossi earlier said.

Russia’s shelling of the Zaporizhzhia nuclear power plant that intensified in early August sparked concerns of disaster. Russia has been rejecting calls to demilitarize the plant. It repeatedly states that its role is to protect the site from provocations, blaming the attacks on Ukraine.

On Monday, December 5, a fuel truck exploded at the Russian airfield Dyaghilevo near the city of Ryazan, killing at least three people. A drone struck the Russian Engels air base in the Saratov region, damaging the strategic bombers.

The airfields are a base for Russia’s long-range strategic bombers Tu-95MS, Tu-160, and Tu-22M3 that can launch cruise missiles from more than 1,000 kilometers away. Russia had previously deployed the bombers to the Black and Caspian seas to strike targets in Ukraine, Ukraine said.

The fire started at an airfield in the Russian city of Kursk. The governor of the Kursk region Roman Starovoyt said: “A drone attack has set an oil storage tank on fire. There are no casualties. [The firefighters] are locating the fire. All services are deployed to the site.”

Discovering Ukrainian Culture is a new series of episodes of the Explaining Ukraine podcast. In our first episode, we discuss Hryhoriy Skovoroda, the founding father of Ukrainian philosophy. Skovoroda lived in the 18th century, but his lifestyle and teachings are just as vital now as they were in his day; his idea of personalized nature helps us find meaning in today’s world. – Hosts: Volodymyr Yermolenko, Ukrainian philosopher and journalist, chief editor of UkraineWorld.org, and Tetyana Ogarkova, Ukrainian scholar and journalist, head of the international department at the Ukraine Crisis Media Centre.

Munich-based philatelist, the founder of the philatelic website: https://www.ukraine-war-in-philately.eu Michael Kogan and ​​head of the Crimean organization of the Association of Philatelists of Ukraine Andriy Ivanets discuss the history of Ukraine’s wartime postage stamp art.

How Ukrainians help homeland from abroad? Ukraine in Flames #267

How and why Croatia helps Ukraine? Ukraine in Flames #269