Kyiv, July 14, 2015. Situation in the ATO zone is escalating; the number of ceasefire violations and the use of heavy weapons by militants are increasing. “In the Donetsk sector the enemy intensified activities near Horlivka, firing along the entire perimeter of the occupied city between Luhanske and Leninske. At the same time, the massive shelling of Ukrainian positions increased east of the strategic railway section Kostyantynivka – Yasynuvata,” said Colonel Andriy Lysenko, spokesman of the Administration of the President of Ukraine on ATO related issues, at a press-briefing at Ukraine Crisis Media Center. Militants are actively using heavy weapons, 120-mm mortars, tanks and cannon artillery between Novhorodske and Verkhnyotoretske, firing under the cover of dark. 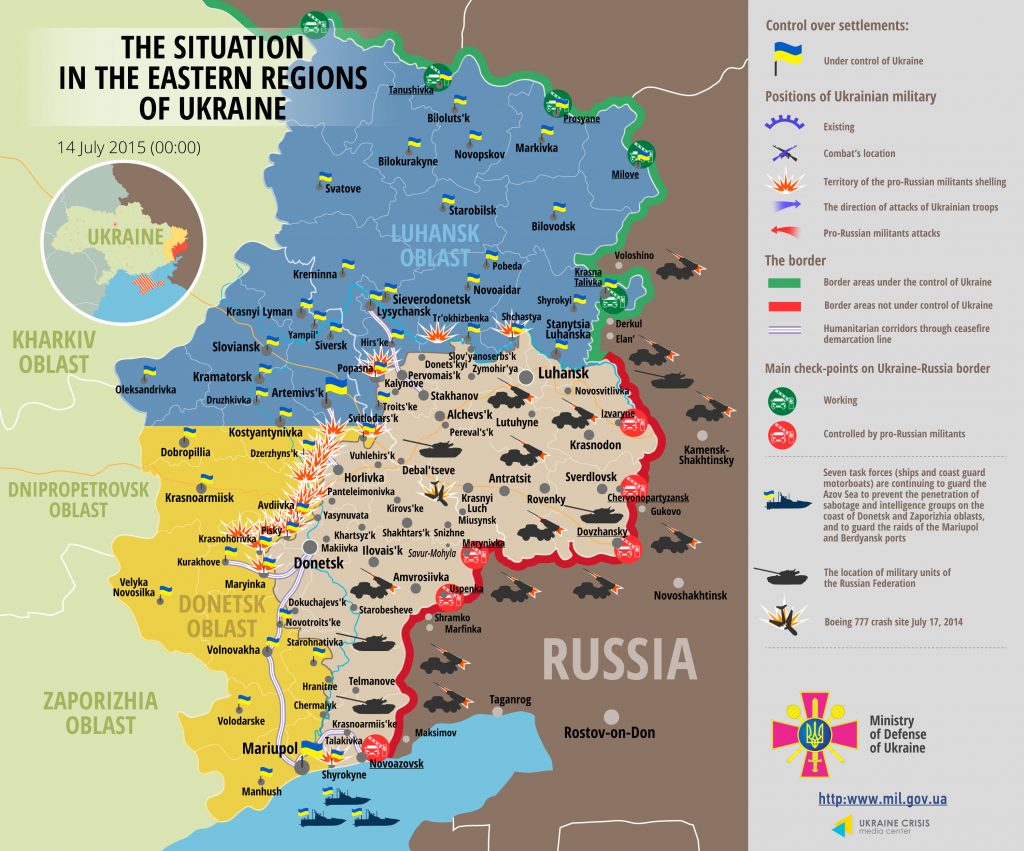 East of Donetsk, skirmishes continue 24/7 along the entire frontline between Avdiivka and Maryinka, while artillery shelling and sniper fire are registered more frequently. “At the same time, south of Donetsk ceasefire violation incidents by militant groups were not spotted,” added Colonel Lysenko.

In the Luhansk sector, Krymske village was the hotspot of the conflict. Russia-backed militants fired at Ukrainian positions from the southeast. Skirmishes with the use of small arms, mortars and IFV-mounted weapons erupted sporadically all day long. Also, enemy raids and firing incidents were registered near Shchastya and Popasna.

In the Mariupol sector, ceasefire was generally holding with only two short-term enemy provocations were registered in Shyrokyne.

Ukrainian Armed Forces did not incur any lethal casualties over the last 24 hours, yet five servicemen were wounded in action in the Donetsk sector.

Ukraine’s Security Service detained a criminal group that was trying to establish illegal arms trade with weapons from the front. Three residents of Sumy organized a supply channel from the ATO zone. Nine grenades and a reactive grenade-launcher were seized from the suspects in the process of detention.

Border guards discovered Grad munitions near Mariupol. “Forty missiles were discovered in a sand quarry lying out in the open. The attentive residents of the town of Aslanove village informed the law enforcers of their dangerous discovery. Works to neutralize the munitions are underway,” explained Col. Lysenko.