Kyiv, July 15, 2015. Russia-backed militants considerably increased the density of fire in several areas on the frontline over the last 24 hours. In the Luhansk region, Ukrainian Armed Forces registered the mortar shelling of Stanytsia Luhanska by militants, who also twice fired “Grad-P” rockets at Ukrainian forces in the area of Novotoshkivske. In addition, the militants instigated sporadic provocations accompanied by attacks from small arms and grenade launchers in Shchastya, Tryokhizbenka, Krymske and Zolote, said Colonel Andriy Lysenko, spokesman of the Administration of the President of Ukraine on ATO related issues, at a press briefing at Ukraine Crisis Media Center. 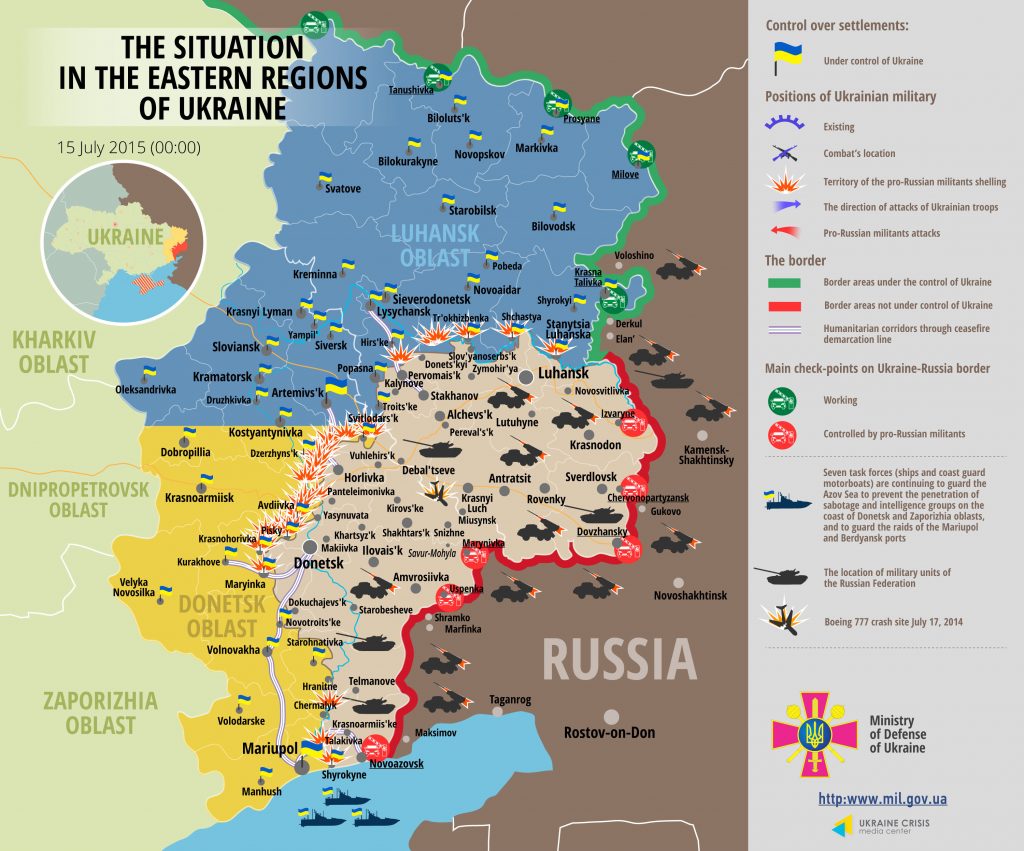 The most complicated situation stands in the Donetsk region, where over 80% of ceasefire violations by militants have been registered. The four hotspots in the region remain the Svitlodarsk surrounding area, northern outskirts of Horlivka, Novhorodske and western outskirts of Donetsk, where large-caliber artillery and tanks are in use. “Mayorsk, Mykolayivka Druha and Leninske came under artillery and mortar fire. Enemy attacks on Ukrainian forces did not cease near Novhorodske, where an important railway station and a chemical plant are located. The enemy used small arms, tanks and the artillery. In the Donetsk airport area, combat actions lasted around the clock, while an enemy sniper and a tank were spotted at work near Krasnohorivka. Enemy provocations were not registered south of Donetsk, in the area of Olenivka, Dokuchaievsk and Volnovakha,” noted Col. Lysenko.

The situation near Mariupol remains more or less calm. Only three short-lasting provocations using small arms were registered in Mykolayivka, Talakivka and Shyrokyne over the last day.

Five flights of enemy UAVs were registered in the ATO zone yesterday.

According to Colonel Lysenko, the occupying administration in the Donetsk region announced the so-called “nationalization” of both the Starobesheve power plant and the gas pipeline in the region’s militant-controlled eastern part. “Judging from intelligence, the occupiers plan to take ownership of all “Ukrzaliznytsia” (Ukrainian Railways) property in the occupied areas and completely cease coal extraction in the mines of the state company “Artemvuhillia” in Horlivka by September 1, due to the company’s considerable wage debts to its workers,” he added.

The latest report by the OSCE Special Monitoring Mission notes that a member of the “DPR” militant group deployed to the “Novoazovsk” seized border crossing point openly admitted that 150 trucks cross the border daily, both entering and exiting the country. Neither Ukrainian border guards, nor representatives of the International Committee of the Red Cross check their content. The militant also confirmed that food, steel and metal products are being taken from Ukraine to Russia.

Ukraine’s Security Service detained a “DPR” militant who was part of the “Slaviane” and “Vostok” militant groups. The militant was detained while he was paying a visit to relatives on government-controlled territory. “The militant informer was detained near Stanytsia Luhanska, and has been was working at the heat power plant in Shchastya. He was collecting information on the movement, number and types of equipment of the Ukrainian Armed Forces throughout May 2015, and then passed this information to one of the “LPR” militants. Several cell phones and SIM-cards were seized from the enemy agent, which he was using to communicate with his contacts,” said Col. Lysenko.