Kyiv, July 16, 2015. Ceasefire was generally holding in the Luhansk sector. Ukrainian troops have registered only two brief armed provocations of Russia-backed fighters near Krymske and Novotoshkivske. Ukrainian Armed Forces did not incur any lethal casualties over the last day, said Colonel Oleksandr Motuzyanyk, spokesman of the Administration of the President of Ukraine on ATO related issues, during a press briefing at Ukraine Crisis Media Center. 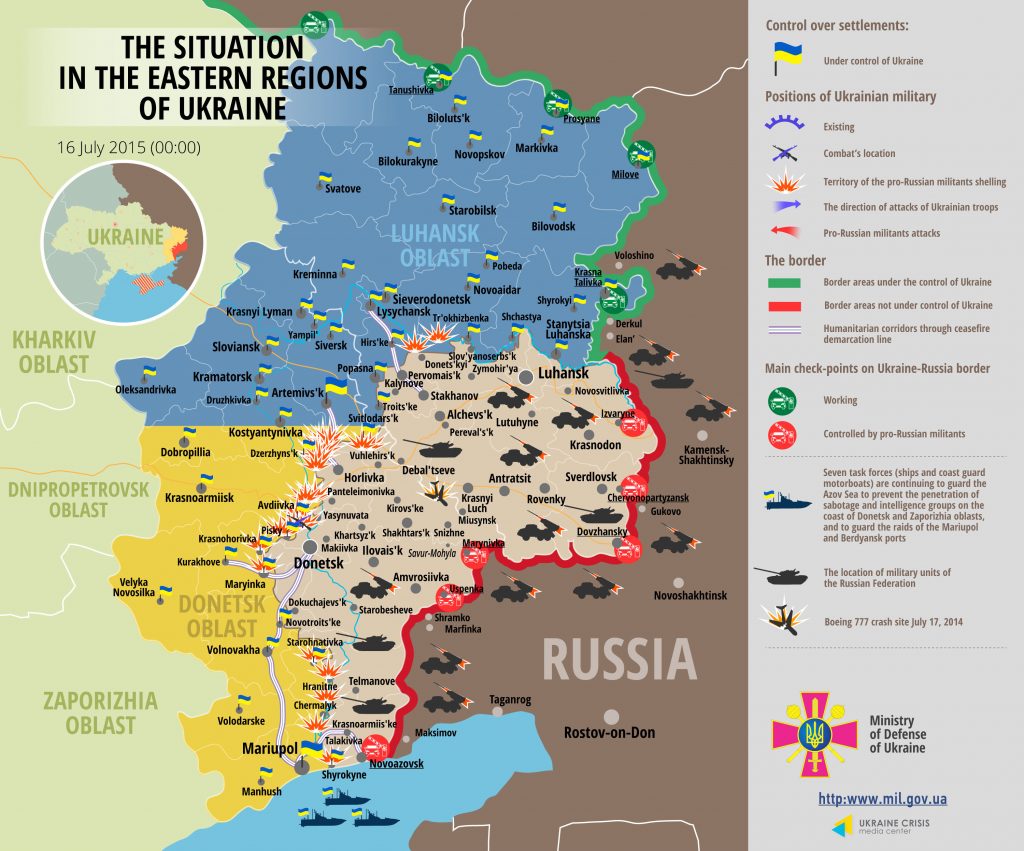 In the Donetsk sector, militants started massive shelling of the positions of the Ukrainian forces to the north and west of Horlivka. “The fire exchange lasted about 2 hours: the enemy fired from at least five spots and used an array of weapons, ranging from small arms to tanks and artillery. Furthermore, at least one civilian was killed as a result of militant attack at Kodema village,” – said Col. Motuzyanyk.

In addition, Novgorodsky and Verkhnotoretsky came under militant’s mortar attacks. The situation around the Donetsk airport worsened as well: “Militants are trying to force the Ukrainian military out of their positions in Pisky and Opytne. We have traced enemy artillery, from which militants fired toward Avdiivka. Ukrainian troops did not register any cases of heavy arms use near Maryinka and Krasnohorivka, as well as south of Donetsk,” said Col. Motuzyanyk.

In the Mariupol sector, tensions resumed. Russia-backed militants conducted a series of powerful artillery attacks on the Ukrainian military positions near Starohnativka, while in the evening they have also used tanks. “Unrest was also in Shyrokyne, but these provocations were rather isolated”, said Col. Motuzyanyk.

Eleven Ukrainian serviceme were wounded in action in the last 24 hours.

Ukraine’s Security Service in Kharkiv detained a “DPR” militant when he laid the explosives at the KharkIv-Passenger railway station. “The detainee was planning to blow up a rail switcher using 2.5 kilograms of TNT,” noted Col. Motuzyanyk.

Ukrainian police force in the Donetsk region detained a militant who was carrying an explosive. “It was designated for a subversive act in Kharkiv. An impressive arsenal was taken away from the detainee: 50 kilograms of explosives, a grenade launcher, a machine gun, a pistol, grenades and ammunition,” concluded Col. Olexandr Motuzyanyk.