Kyiv, July 17, 2015.  In the Luhansk sector, the conflict has escalated. For the first time over the last few weeks, Russia-backed militants shelled the Ukrainian forces near the villages of Novotoshkivske and Orikhove three times. Colonel Andriy Lysenko, spokesman of the Administration of the President of Ukraine on ATO related issues, confirmed these updates during a press briefing at Ukraine Crisis Media Center. 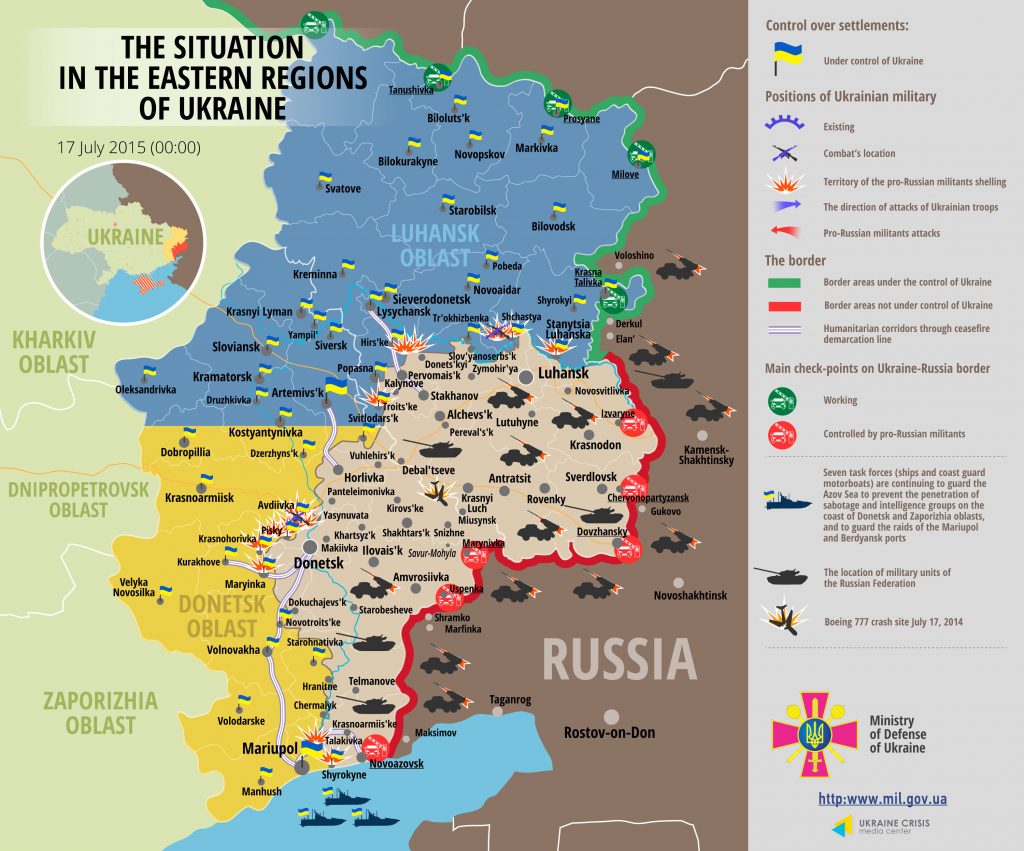 “Enemy fire came from the south, and from an array of different weapons,” added Col. Lysenko. Isolated militant provocations also occurred in Stanitsia Luhanska, Shchastya, and beween Troyitske and Kalinove. Additionally, the Ukrainian troops successfully fought off an enemy subversive group near the village of Stary Aidar, which was attempting to cross through Siversky Donets river.

In the Donetsk sector, the situation has stabilized. Near Svitlodarsk and Horlivka – and also along the train tracks between Kostiantynivka and Yasynuvata – no ceasefire violations by Russian-backed militants were registered.

Active military engagement returned to the front only between Avdiika and Maryinka. “Between Avdiivka and Yasynuvata, Ukrainian forces were warned of a breakthrough by an enemy subversive group. Concerning heavy weaponry, in this area the militants used 120-mm mortars, firing from the village of Spartak in the north toward Avdiika,” said Col. Lysenko. Snipers were very active on the southeastern outskirts of Donetsk, while to the south the ceasefire holds.

Situation in the Mariopol sector remains relatively quiet. Enemy snipers were active near Talakivka, and in Shyrokyne, where the militants carried out a short small-arms provocation.

Ukrainian Armed Forces did not incur any lethal casualties; two servicemen were wounded in action near the Donetsk airport in the last 24 hours.

In the village of Novotroyitske, Donetsk region, Ukraine’s Security Service (SBU) detained an enemy militant by the nom de guerre “Kashchey,” who was a member of the “Somali” militant cell and took part in military action near the Donetsk airport.

Operatives in the Luhansk region detained another enemy informer who has been supplying “LPR” militants with intelligence on both the whereabouts of Ukrainian checkpoints and the Ukrainian army’s rail transportation of military equipment.

Additionally, the SBU discovered a hidden weapons cache in Dnipropetrovsk region. Six boxes of RGD-5 grenades, 18 rocket-propelled grenades in the their original packaging, 35 flares, and 50 boxes of charges for artillery shells were removed from a half-destroyed dugout.

During the briefing, Col. Lysenko also reminded his audience that exactly a year had passed since the MH-17 Boeing 777 catastrophe. “Exactly a year ago in eastern Ukraine, a terrible tragedy took place. Malaysian Airlines Boeing 777 was downed over the militant-controlled territories in the sky over the Donetsk region. In this catastrophe, 298 people perished, including 15 crewmembers and 80 children.”