Kyiv, July 18, 2015. Three residents of Avdiivka have died after the artillery shelling of the city’s residential districts launched by Russia-backed militants. An elderly woman born in 1942, her 10-years-old grandchild with disabilities, as well as a 49-years-old man whose body was found under the remnants of the ruined building, perished as a result of attack. “Ukrainian law-enforcement classified the shelling of Avdiivka as a terrorist act,” said Colonel Andriy Lysenko, spokesman of the Administration of the President of Ukraine on ATO related issues, at a press briefing at Ukraine Crisis Media Center. 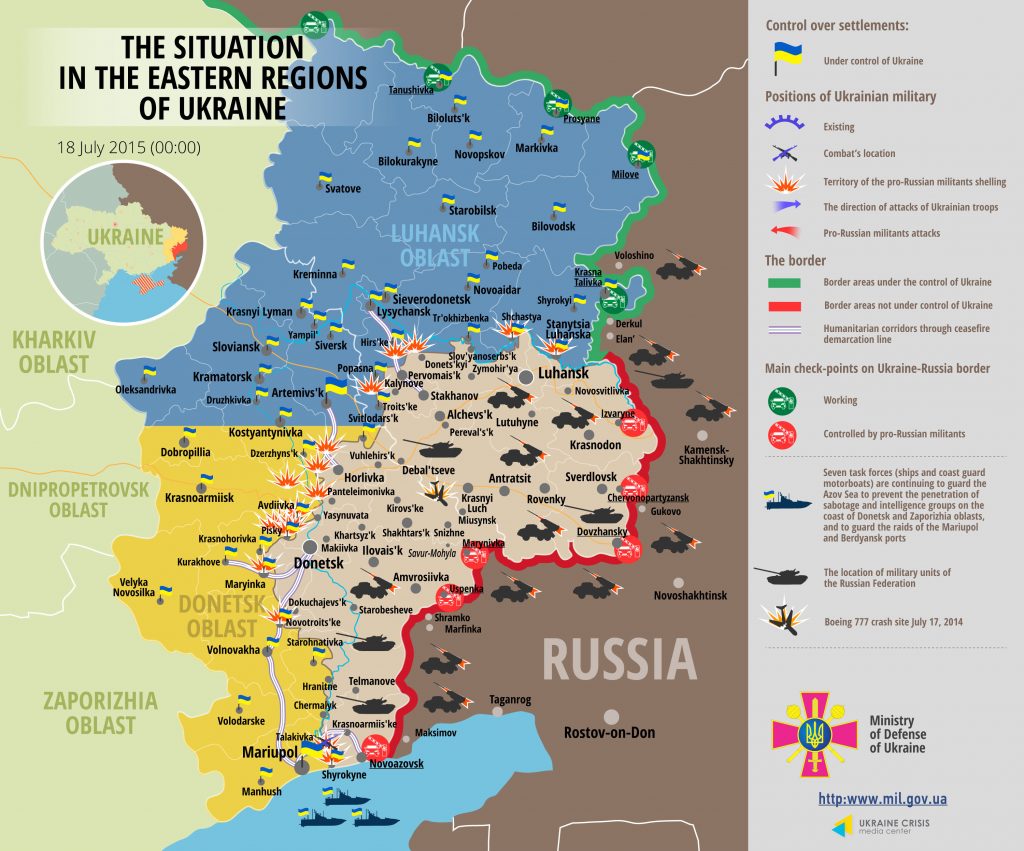 Beside Avdiivka, fighting continued in the areas around the Donetsk airport. Militants fired from 120 mm mortars at the Ukrainian military positions near Opytne, Pisky and Vodyane. They also used tanks near Pervomaysk, while enemy snipers were active not far from Maryinka.

In the Mariupol sector, Ukrainian troops successfully repelled attack of an enemy subversive group numbering up to five militants. Russian proxies also instigated a brief provocation, firing from small arms near Shyrokyne, and used a 120 mm mortar by Novotroyitske.

In the Luhansk sector, militants intensified activities near Shchastya and Stanytsia Luhanska, as well as close to Novotoshkivske and Zolote. “No facts of militants’ heavy weapons use in the area have been recorded,” noted Col. Lysenko.

One Ukrainian serviceman was killed in action and five more were wounded in the last 24 hours.

Ukraine’s Security Service (SBU) published more evidence of how Russian security services tortured Ukrainian citizens. In June 2015, a resident of Luhansk region was detained by Russian border guards. After the Ukrainian refused to answer their questions, he was beaten and tortured with electric current. He managed to get back home and now he cooperatives with the SBU.

Ukrainian operatives detained a subversive who was plotting two terrorist attacks in Kharkiv. Previously, the militant took part in seizing Kharkiv regional administration last year and fought in the ranks of such militant groups as “Kharkiv partisans”, “Don” and the so-called “LPR”.

Col. Lysenko also reported that the security service and the Prosecutor General’s Office have confiscated a high-end equipment for wiretapping calls capable of intercepting telephone conversations of up to 128 persons. “It costs more than 200,000 US dollars. Ukraine’s law enforcers work to identify the owner of this espionage equipment,” Col. Lysenko concluded.