Kyiv, July 19, 2015. Russia-backed militants used heavy weapons and fired at the positions of Ukrainian troops in all sectors. “In the Donetsk sector, militants sporadically fired from small arms and grenade launchers near Horlivka and Svitlodarsk. There were no enemy provocations at the frontline between Maryinka and Volnovakha. However, Ukrainian troops registered four long-lasting shelling incidents when the enemy targeted the residential blocks with heavy weapons. Ukrainian military positions and the villages of Nevelske, Pervomayske and Vodyane, located 5-10 km from the frontline, came under enemy fire. Ukrainian forces also registered militant attacks in Avdiivka, Krasnohorivka and Maryinka,” noted Colonel Oleksandr Motuzyanyk, spokesman of the Administration of the President of Ukraine on ATO related issues, at the press briefing at Ukraine Crisis Media Center. 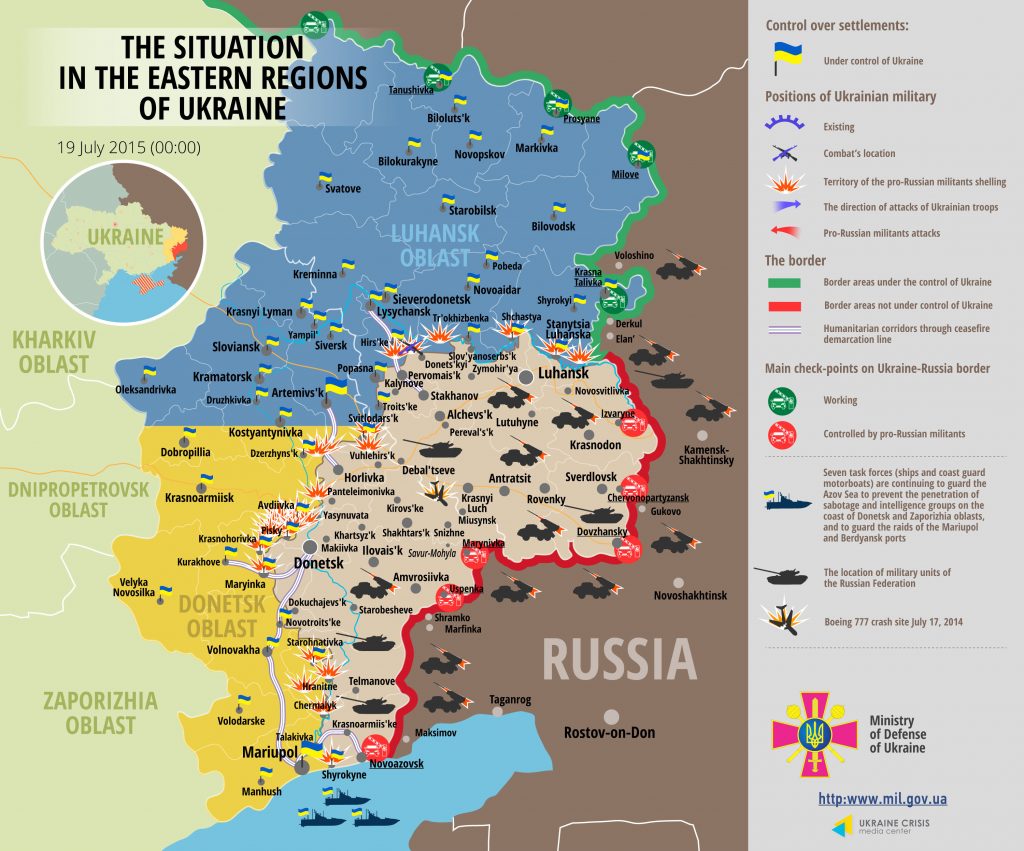 In the Luhansk sector, Stanytsia Luhanska and its outskirts were the epicenter of militant attacks. Ukrainian troops repelled the attempt to storm the position by the militant subversive group near Orikhove, which tried to advance from the South. Militant groups instigated sporadic provocations near Shchastya, Krymske and Zolote using small arms.

In the Mariupol sector, active military action took place early in the morning. “The enemy opened fire from heavy weapons at our positions between Starohnativka and Hranitne. Ukrainian servicemen registered the use of both mortars and the artillery. Sporadic attacks from small arms also occurred in Chermalyk and Shyrokyne,” added Col. Motuzyanyk.

One Ukrainian serviceman was killed in action and seven got wounded in the last 24 hours. Most of the casualties have been inflicted on the western outskirts of Donetsk.

Ukraine’s Security Service discovered combat grenades, a pistol and anti-Ukrainian propaganda leaflets during the search of a private house in the city of Rubizhne, Luhansk region.

Meanwhile, Mariupol police forces uncovered a female militant accomplice. “Suspect occupied the position of the Deputy Head of Zhovtnevy State District Administration of Mariupol. It was discovered that the woman took part in organizing a pseudo-referendum held by Russia-backed militants. A criminal proceeding has been initiated,” reported Colonel Motuzyanyk.

Ukraine’s border guards discovered 1,300 ampoules with drug-containing medicine in Verkhnyotoretske village, Donetsk region, which a citizen of Ukraine was trying to bring to Donetsk. The police seized the illegal cargo and took the suspect in custody. Also, several smugglers were detained at the “Buhas” checkpoint when they tried to illegally transfer over two tones of chicken meat to the militant-controlled territories. “The offenders tried to bribe the guards offering them twenty thousand hryvnia, but failed. They were detained and passed to Volnovakha police unit in Donetsk region,” summed up Col. Motuzyanyk.