Kyiv, July 23, 2015. International observers have repeatedly registered the movement of pro-Russian rebels’ military equipment in the occupied territories. An OSCE Special Monitoring Mission Unmanned Aerial Vehicle (UAV) recorded eleven tanks, thirty-one armored personnel carriers and four 122-mm artillery mounts, as well as at least thirty-one military trucks in the vicinity of Bezimenne, currently occupied by self-declared DPR. The distance from the village to the demarcation line is about 10 kilometers. This information was provided by Colonel Oleksandr Motuzyanyk, Spokesperson of the Administration of the President of Ukraine on ATO-related issues, at a press briefing at Ukraine Crisis Media Center. 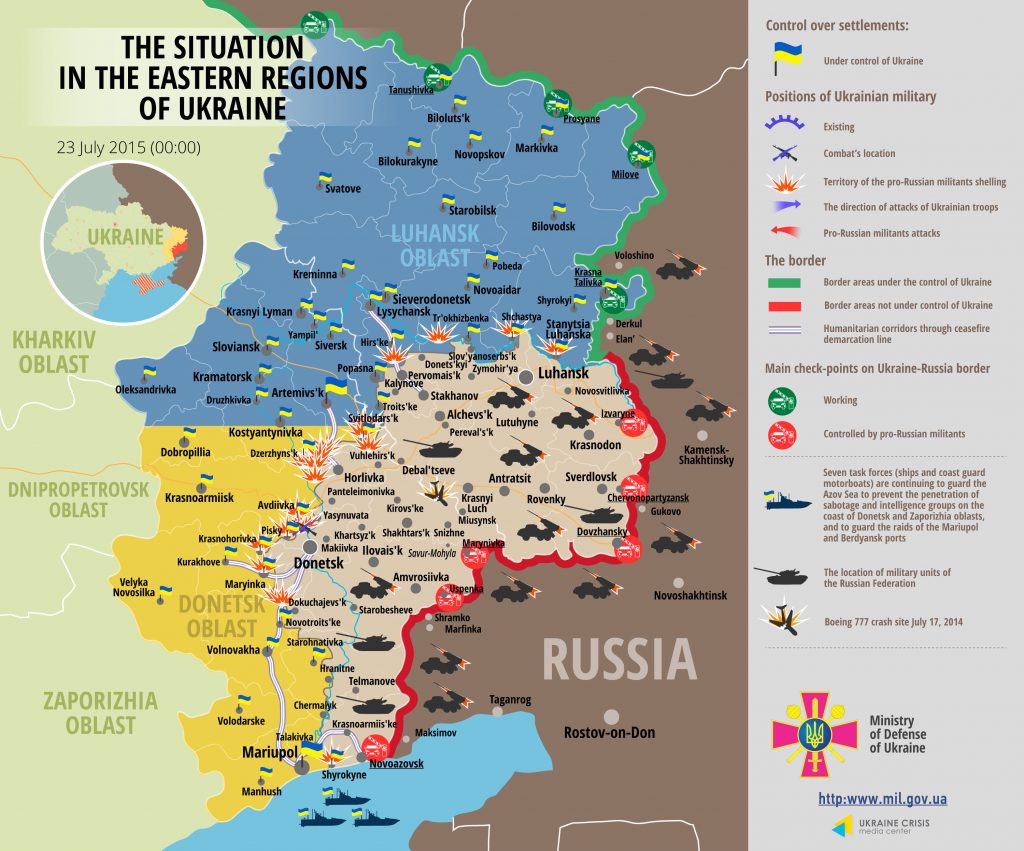 “Ukrainian border guards shot down a Russian-produced UAV. The pilotless aircraft was conducting reconnaissance on front nearby Herasymivka in the area Stanytsya Luhanska. Our troops swiftly responded to the violation of Ukrainian airspace and shot the enemy’s UAV down,” said Col. Motuzyanyk.

The militants continue mortar and artillery fire on Ukrainian positions at the first and second lines of defense near Svitlodarsk. The situation is the direst in the area of Novhorodske, where the Russia-backed militants twice fired upon ATO forces using 122-mm cannons. “Two thirds of all the ceasefire violations committed by the enemy took place in the area between Avdiyivka to Maryinka. Ukrainian forces are holding the line despite the enemy’s intense shelling, so the frontline remains firm. There were at least three reported cases of civilians being injured in artillery fire committed by the enemy. In addition, in Mariupol sector the ceasefire is generally holding. There were only two brief armed provocations committed by militants in Shyrokyne,” informed the Colonel.

Eight flights of enemy UAVs were spotted in the ATO zone yesterday. Another Russian UAV violated Ukrainian airspace in the Sumy region.

The Ukrainian Armed Forces incurred no losses in action over the last twenty-four hours, though seven Ukrainian servicemen were wounded.

Ukraine’ Security Service detained a Kramatorsk resident. The woman was transferring information regarding the locations and movement of Ukrainian military equipment to Russia-backed militants. She was also providing the rebels with medical supplies. In addition, investigators shut down a medical supply route to militants from Dnipropetrovsk region. “A local company was illegally supplying a wide range of medicines to the temporarily occupied territories. Investigators seized documents providing evidence that the medicine was delivered to Donetsk, Makiyivka and Shakhtarsk and given to the separatists. Some of the medicine was sold to the locals at elevated prices. Investigators seized 1,225,000 hryvnia, over 50,000 euros and 7,000 US dollars while searching offices and storage facilities. The criminals obtained these funds by illegal means,” said Motuzyanyk.