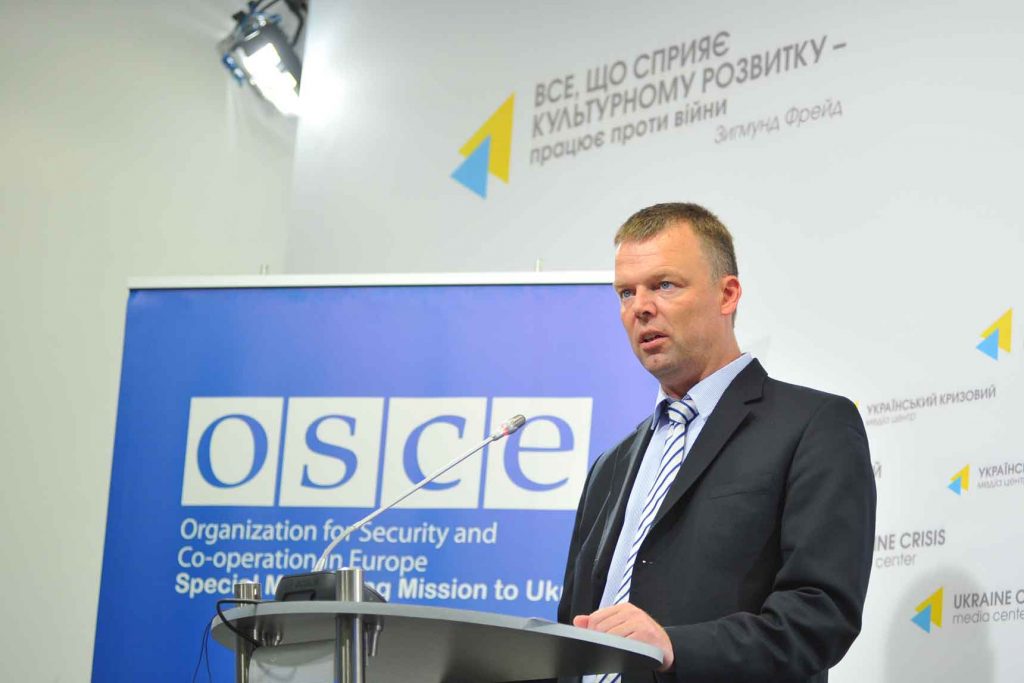 July 23, 2015. At a press briefing at Ukraine Crisis Media Center, Alexander Hug, Deputy Chief Monitor of the OSCE Special Monitoring Mission (SMM) in Ukraine, stated that thirty OSCE vehicles were spray-painted during a peaceful protest in Donetsk, over the weekend. In response, Hug stated that such actions were, “Unacceptable. The spray-painting has made some of our vehicles un-operational, hindering our work. The OSCE calls for an investigation into these actions.”

Additionally, over the weekend, Hug attended the sixth round of the Trilateral Contact Group meetings, where the group agreed to add an addendum to a package of measures on tanks and artillery. Participants also agreed to review a new proposal on Shyrokyne in Donetsk region posed by the Ukrainian side, though concrete steps have yet to be taken. Although he stated that, “dialog between both sides is important and crucial,” Hug went on to express that, “words need to transfer to actions on the ground.”

The SMM reported that heavy weapons from both sides appear to have been withdrawn from the frontlines, sometimes in large number. However, the OSCE reported that both inside and outside of the withdrawal lines, weapons from both sides are still killing soldiers and civilians in Donetsk and Luhansk regions. Moreover, Hug intimated that, “the OSCE needs to know where the weapons are now, where the routes of withdrawal on both sides are, and where they are being stored.” He added that the SMM had requested this information from both sides four times, and had yet to receive the information. The OSCE noted the movement of trucks and armored vehicles in the self-declared “DPR” and “LPR”, and Ukrainian government-controlled areas, including 120mm mortars, T-64 tanks and tank support, and ammunition trucks. Hug explained that this movement signified an increase in military activity, and a fortification of defensive positions along the contact line.

Hug described the overall mood in the Donbass as tense. Ceasefires violations continue, oftentimes with the use of heavy weapons. In particular, the situation in Donetsk appears to be worsening, with artillery fire occurring in the city center, as well as in Avdiivka. The shelling incidents escalated on Saturday, yet ceased altogether on Sunday. One citizen died as a result. However, for the first time in several months, the OSCE reported that the Donetsk airport remained calm on Monday. Violence surged south of Donetsk, particularly in the area north and northeast of Mariupol, nearby the government-controlled Hranitne. Shyrokyne, however, remains quiet. Hug confirmed that small arms and light weapons are no longer present in the town, despite previous presence.

The OSCE highlighted the dangers faced by civilians as the conflict continues. Additionally, OSCE drones captured images of military hardware in Komsomolske, located in DNR territory. For the first time, a drone conducting surveillance over Mariupol’ was jammed, preventing intelligence gathering. In what the OSCE suspects is the result of jamming, another drone was damaged near Mangush. Hug explained that jamming typically occurs in areas where large concentrations of weapons are present, referring to its practice as “censorship.”