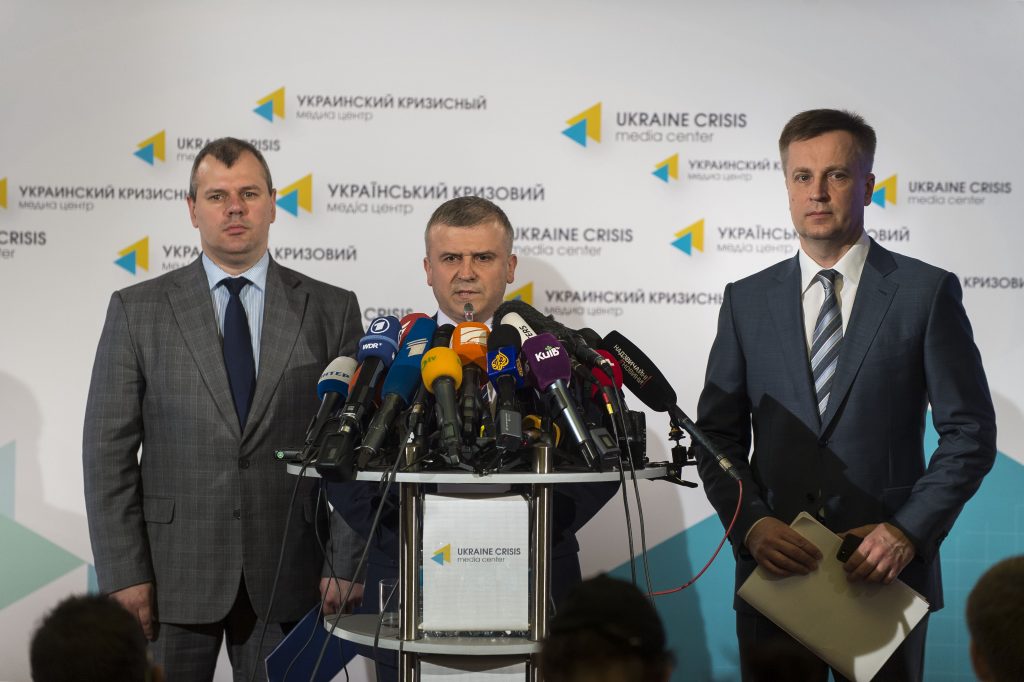 Kyiv, May 23, 2014 – State authorities are carrying out all the necessary measures to conduct the May 25 elections in democratic way in maximum number of voting stations. Heads of the General Prosecutor Office, the Ministry of Internal Affairs and the Security Service of Ukraine reported on current measures and results of law enforcement and security situation during the media briefing in Ukraine Crisis Media Center. Particularly, 55 thousand militia officers and public representatives have been engaged into voting stations defense. Within the anti-terrorism effort, activity of a number of criminal organizations has been ceased, including those on money laundering. Criminal proceedings on so-called Donetsk and Luhansk republics have also been launched.

Processes endangering election process are taking place in Donetsk and Luhansk regions. In particular, criminal groups and terrorist organizations acting in Southeast are attacking voting stations, laying hands on documentation, damaging office equipment, seize members of election committees and party members and generally are trying to intimidate people.
Under these circumstances, as Mykola Velychkovych, Deputy Minister of Internal Affairs of Ukraine, reported, more than 55 thousand law enforcement officers, approximately 11 thousand officers of State Service for Emergency Situations as well as the National Guard representatives, senior classmen of the Ministry of Internal Affairs educational institutions and over 16 thousand public activists who displayed initiative in assistance in maintaining law and order in public places and voting stations during elections, have been engaged by the Ministry of Internal Affairs to protect 32 thousand voting stations. The government also made a decision to involve about 11 thousand officers of the Tax Militia to facilitate these processes. “Thus, we are certain that the process is generally under control», – Mr. Velychkovych underlined.

All the representatives of Ukrainian militia who have been involved into the election process received the plan of action for different situations – starting from the bulletins delivery till the election results posting. Besides, the OSCE mission sent over 100 long-term observers to work in Ukraine before and during the elections. More than 900 observers working directly in time of the elections will also be engaged.

Due to inactivity of the internal affairs bodies in Donetsk and Luhansk regions heads of the regions and heads of executive authorities in these territories are inviting citizens to participate in law enforcement on the election day. This fact does not imply creating official or unofficial formations: all the volunteers of self-defense will swear the oath for state fidelity, will be listed by the National Guard and act under the Ministry of Internal Affairs and the National Guard supervision. «If there are more than 2,6 thousand law enforcement officers in Donetsk and 300-400 terrorists brutalizing the public, it must be treated as the militia officials’ unwillingness to protect their people, – says Mykola Holomsha, first deputy of the General Prosecutor of Ukraine, – Moreover, the Ministry of Internal Affairs has already initiated official and criminal proceedings pertaining to the officials who avoid performance of their duties and they will be brought to criminal liability».

Within the scope of the anti-terrorism effort, activity of a number of criminal organizations has been ceased and active work is proceeding. Valentyn Nalyvaychenko, Head of the Security Service of Ukraine came out with the details. Only during the last 24 hours the Security Service of Ukraine detained and liquidated 5 raiding parties and terrorist groups with weapons and explosives in their possession. Within 24 hours in Pavlohrad (Dnipropetrovsk region) a group consisting of 5 Ukrainian citizens holding weapons and explosives in volume, aimed at commission of crimes in the territory of Dnipropetrovsk region on the election day. A citizen of Russian Federation acting as a recruiter in the territory of Cherkasy, Vinnytsya and Kharkiv regions has been arrested as well. «Having taken investigatory action, we clearly realize their aim – undermining the elections, intimidating citizens, poisoning civilian population, disruption of bridges infrastructure as well as residential buildings in non-combatant district», – stated Mr. Nalyvaychenko.

As the subversive and terrorist activities are remunerated in cash, revelation of a conversion center (“a washing machine”) on dirty money laundering in Kiev became a particular achievement of the Security Service of Ukraine. This criminal organization comprised 3 bank institutions, 3 legal bodies in form of offices, approximately 20 apartments and several dozen vehicles. Only in 2014 the scope of fraud amounted to 700 million hryvnias, stolen and converted into cash, mostly directed to financing subversive activities and illegal purchase of weapons.

According to Mykola Holomoysha information, at present 454 criminal offences under investigation of law enforcement bodies have been registered in the prejudicial enquiry registry. Buildings seizure, roads blocking, citizens intimidating were among these criminal offences. Prosecution bodies also зафіксовано over 20 criminal offences pertaining to hindering the election process and separate political parties in conducting democratic elections.

What pertains to fighting the terrorists directly, prosecution bodies and the Security Service of Ukraine entered 25 criminal proceedings into the prejudicial enquiry registry. At present they are integrated into 2 criminal proceedings on two terrorist organizations – so-called Donetks and Luhansk republics.
«These groups are not governed by politicians, by people’s choice, but by hierarchy structure with all the attributes of the Criminal code, having weapons, clear hierarchy, subordination and financing. I believe my colleagues can confirm that it is being financed and directed by our neighbours from the Russian Federations and we have got the proof of it», – said Mr. Holomsha.

State bodies off Ukraine unite for the sake of securing democratic election process. Within coordinated activity the Security Service of Ukraine together with the Central Election Committee, the General Prosecutor Office and the Ministry of Internal Affairs conducted work in several directions. First of all, the Central Election Committee’s server is being protected. In particular, yesterday they deleted infected software which was illegally presented to the Central Election Committee by the former government. On May 25 the malicious software was to delete the election results. Second, protection of bulletins takes place so that they are delivered to precinct electoral committees and district electoral committees. Third, registers of voters are being protected by means of a powerful cybersecurity system.

Thus, the authorities assure that all the necessary measures are being taken to make it possible for Ukrainians all over the country to demonstrate their political will in most safe conditions.

Valentyn Oleksandrovych Nalyvaychenko – Ukrainian state and political figure, Head of the Security Service of Ukraine (2006-2010, since 2014). Worked as a first deputy of the head of Verkhovna Rada Committee on Foreign Affairs, a member of permanent delegation of Verkhovna Rada at OSCE Parliament Assembly. (December 2012 – February 2014). Made a substantial diplomatic career, in 2004-2005 was a deputy Minister of Foreign Affairs of Ukraine. Since 2006 has been working in the sphere of state security.

Mykola Romanovych Velychkovych – Deputy Minister of Internal Affairs of Ukraine since March 2014. Earlier – a deputy head of Self-Defense of Maydan.