Kyiv, July 27, 2015. Yesterday, Ukrainian troops engaged in three separate engagements with Russia-backed militant groups on the eastern section of the front near the village of Shchastya. “The third engagement was the hardest, where Russia-backed militants deployed tanks. All three attacks were repelled and the assailants were pushed back over the Siversky Donets river,” said Colonel Andriy Lysenko, spokesman of the Administration of the President of Ukraine on ATO related issues, at a press-briefing at Ukraine Crisis Media Center. Late in the evening on July 26, militants fired intensely upon Ukrainian forces near Shchastya with 152-mm artillery and mortars. The militants also conducted a series of attacks with grenade launchers near Stanytsia Luhanska during the evening. The ceasefire was upheld on the section of the front between Stary Aidar and Popasna. 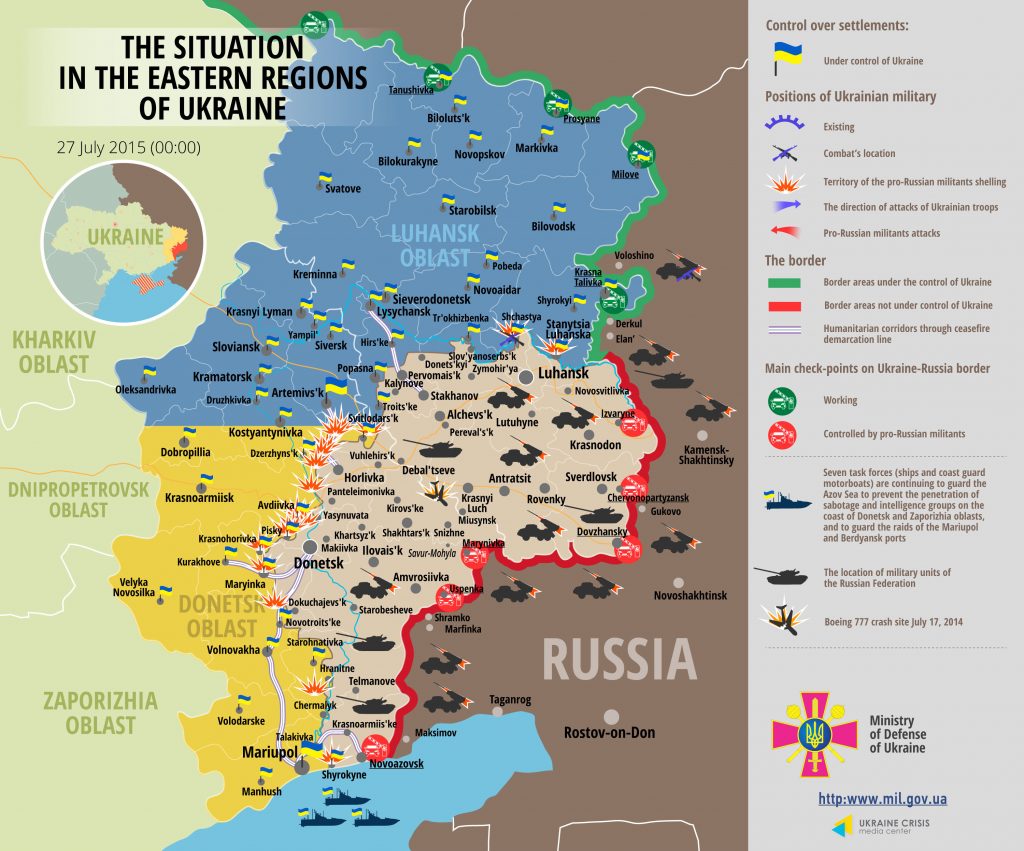 In the Donetsk sector, firefights between militants and Ukrainian troops took place near Svitlodarsk and Horlivka during the second half of the day. Around midnight, the militants fired upon the positions of Ukrainian forces with mortars and artillery along the Artemivsk – Horlivka railway, near Kurdyumivka and Mayorsk stations.  “As a result of artillery fire by militant groups, the Vuhlehirsk power plant in Svitlodarsk was damaged and stopped operating,” added Colonel Lysenko.

On the western outskirts of Donetsk, Ukrainian military positions near Krasnohorivka and Maryinka became the epicenter of combat, where militants attacked using almost all available types of weapons. “The enemy has amassed a lot of manpower and heavy weapons in the Petrovsky district of Donetsk, and the adjacent towns of Staromykhailivka and Oleksandrivka,” elaborated Colonel Lysenko. In addition, a civilian was wounded as the result of an intense 30-minute artillery shelling conducted by militants at Avdiivka.

The situation in the Mariupol sector remains calm. Militants fired upon the positions of Ukrainian troops with mortars near Novoselivka Druha from the left side of the Kalmius river. Over the course of the day yesterday, Pro-Russian militants instigated three short-lasting provocations in Shyrokyne.

Moreover, Ukrainian troops noted 16 flights by enemy UAVs in the ATO zone over the last 24 hours.

One Ukrainian serviceman was killed in action over the last 24 hours, and seven were wounded in combat.

In Selidove, Donetsk region, Ukrainian law enforcers detained a local who was cooperating with militants. The detainee had been standing guard at a checkpoint  near Maryinka, Donetsk region.

Ukrainian law enforcement detained a local with a criminal record in the woods on the outskirts of Kamyanka-Dniprovska, Zaporizhia region. “An RPG-22 anti-tank grenade launcher, seven hand grenades, two kgs of powder, 250 g of explosive and rounds were seized from him,” noted Colonel Lysenko.

Ukrainian law enforcement prevented the smuggling of an APC from the ATO zone. Policemen stopped a truck towing an armored personnel carrier at a checkpoint near Severodonetsk. “Investigations revealed no permits allowing the transportation of the APC. According to the driver, his orders were supposedly to deliver the APC to Chernivtsi region for remuneration. We are establishing the official responsible for the order,” stated Colonel Lysenko.

Andriy Lysenko also said that the models of the new military uniforms for Ukrainian troops were presented at the Ministry of Defense. Ukrainian President Petro Poroshenko was present at the event. Ukrainian experts developed both combat and ceremonial uniforms. 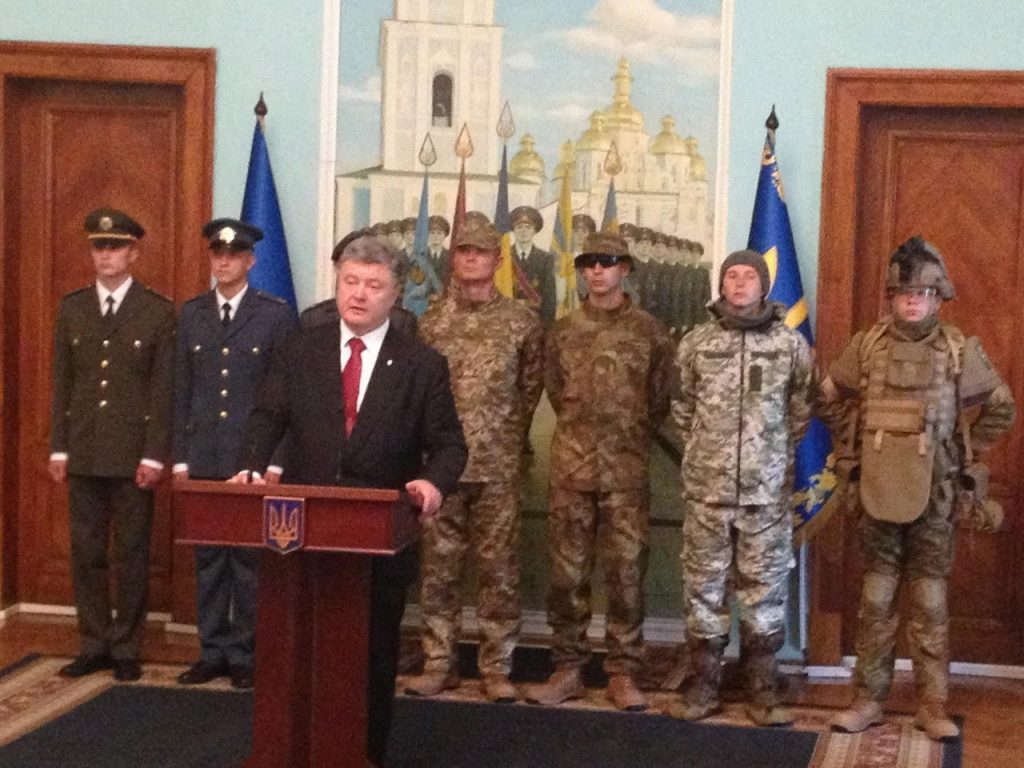