Kyiv, July 28, 2015. For the first time in the past five weeks, ATO forces recorded the use of MRLS Grad launchers by militants. Pro-Russian militants fired upon ATO troops’ positions and residential houses using Grad launchers near the Donetsk bypass. The shots came directly from Donetsk. The militants also use tanks and artillery regularly,” said Colonel Andriy Lysenko, spokesman of the Administration of the President of Ukraine on ATO related issues, at a press briefing at Ukraine Crisis Media Center. 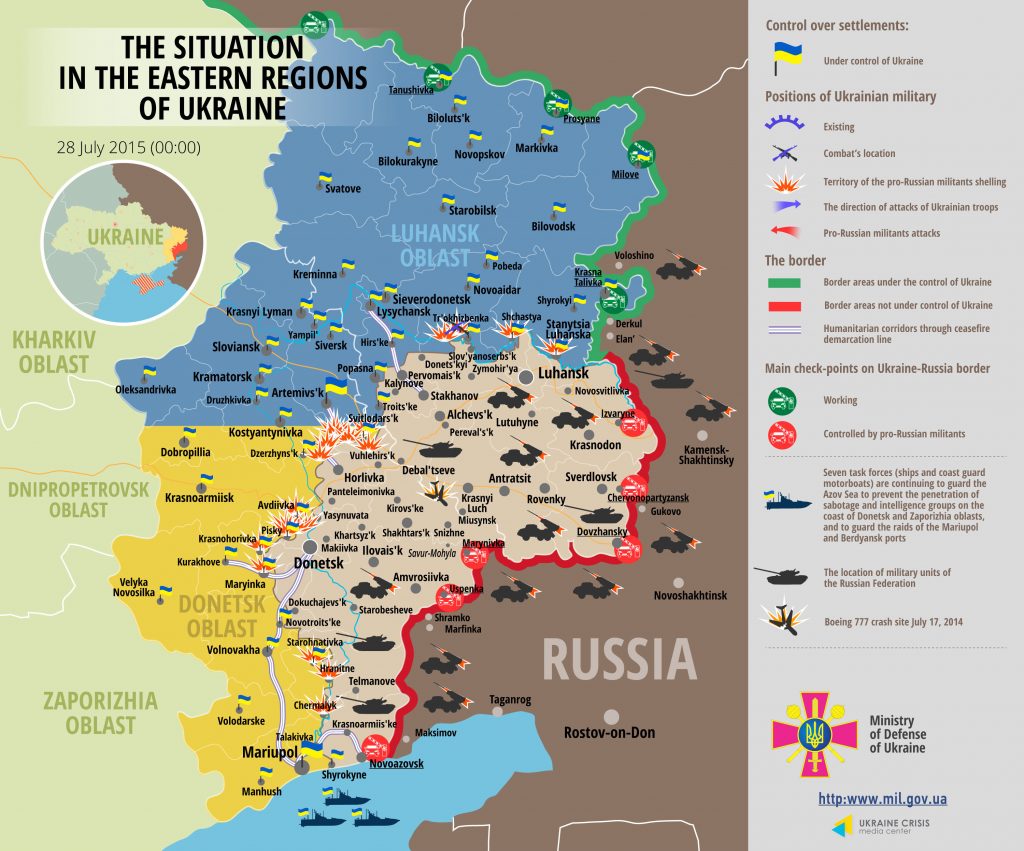 Frontline positions near Svitlodarsk, the occupied Horlivka and the lines west of Donetsk remain the main points of tension in the Donetsk sector. Pro-Russian militants fired from 152mm cannons at residential quarters in Svitlodarsk. Rebels shelled ATO positions from Mykolayivka Druha village using tanks and large cannons. Though fighting continued non-stop in the area between Avdiivka to Maryinka, the armistice held in the area from Maryinka to Volnovakha.

The positions of Ukrainian troops near Stanytsya Luhanska and Shchastya are under fire from mortar guns, artillery and tanks. The shelling resulted in the partial ceasing of operations of a power plant in Shchastya. In addition, fighting resumed north of Bakhmutivska road. ATO troops repelled an attack by a militant reconnaissance group when it crossed the Siverskyi Donets River. Near Krymske, militants committed several armed provocations.

Combat activity lingered east of the occupied town of Telmanove. Pro-Russian militant groups delivered artillery fire near Starohnativka and engaged in mortar shelling near Hranitne. Militants also twice opened fire near Chermalyk from the opposite side of the Pavlopilske water reserve. Pro-Russian militants also fired upon the OSCE mission, wounding one observer who immediately received first medical aid.

Col. Lysenko stated that recent information regarding the exchange of Russian Federation servicemen Yerofeyev and Aleksandrov did not correspond with reality. “This is a fake provocation concocted by Russian special services and mass media aimed at siphoning attention away from the trial of Nadiya Savchenko [a Ukrainian military pilot who was captured by “LPR” militants and illegally held in Russian prison since July 8, 2014],” said Col. Lysenko.

One Ukrainian serviceman was killed in action over the last 24 hours, and twelve were wounded.

Ukrainian special services prevented an attempt at the creation of the self-proclaimed Kirovohrad People’s Republic. In addition, the Security Service of Ukraine put a stop of the functioning of militants’ telecommunication complexes in Dnipropetrovsk, Volyn and Chernivtsi regions.  Over 150 units of telecommunication equipment, 17,500 SIM cards of Ukrainian mobile network operators and about 20 pieces of computer equipment were seized. “Law enforcement officers confirmed the identity of ten criminals involved in an organization with international connections,” said Lysenko.

Moreover, special service officers detained a resident of Donetsk. The woman was illegally exchanging hryvnia stolen from a bank in Luhansk into rubles. Investigators found that the currency exchange scheme was organized by one of the head militants with the nom de guerre, Leshiy, who has been conducting fraudulent activity in Zaporizhzhya, Kherson and Mykolayiv regions.