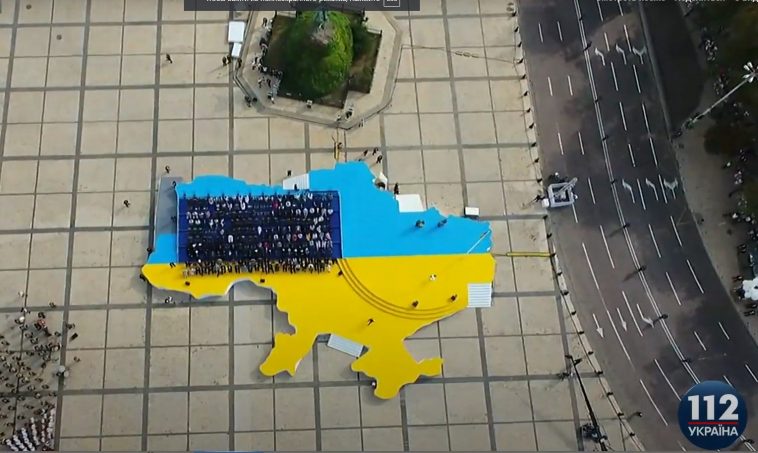 On August 24, Ukraine marks the 29th anniversary of its Independence. The celebrations are taking place across the country. Same as last year, there was no military parade, instead a volunteer-organized veteran march took place. The celebrations included the official part featuring President Zelenskyi and the informal one centered around the March of Veterans. UCMC looks at how Ukraine is celebrating.

What did Zelenskyi say in his Independence Day address? The flag-raising ceremony opened the official celebration at the Sofiyska square in Kyiv. Ukrainian pop star Mykhailo Khoma aka DZIDZIO sang the national anthem. Then, President Zelenskyi made an address, mentioning the war in Donbas, the fight against coronavirus and, more broadly, the future of Ukraine.

“Today marks the 29th day in a row that starts with a truly good morning for me and entire Ukraine as no combat casualties are recorded, Ukrainian cities and villages do not have to pay last respects to their heroes, and mothers are not in tears. Civilians in Donbas don’t get the news on ceasefire, but actually hear the silence,” Zelenskyi said.

Responding to critical comments on not holding the parade for the second year, the President said: “Ukrainians will be able to cordially thank and pay their respects to all veterans and volunteers during their walk on Khreshatyk later today. Our weapons are in the east, I am convinced that’s the way it should be.”

“Tanks, armored personnel carriers and aircraft are not an attraction for Kyivites and the guests in a country that is protecting its sovereignty. Weapons should not be in peaceful Kyiv, but on the frontline, where they are now needed,” Zelenskyi said.

The veteran march. The March of Ukraine’s defenders, organized by volunteers, embraced servicemen and servicewomen of the Ukrainian Armed Forces and volunteer battalions as well as combat veteran organizations and families of those killed while on active duty. First to walk were mothers and family members of the military killed while in service, family members of activists killed in Maidan during the Revolution of Dignity and combat veterans wounded in action in Donbas. Participants of the march exceeded 10 thousand, they formed 48 columns.

One of the columns walked to attract attention to the case of volunteers and veterans Andriy Antonenko, Yulia Kuzmenko and Yana Duhar charged with Pavlo Sheremet’s murder, thought to be a failure of justice.

Solidarity with Belarus. Ahead of Independence Day a solidarity action with Belarusian protesters was held in Kyiv. The human chain stretched from the Embassy of Belarus to Maidan Nezalezhnosti, the central square. Marking the 31th anniversary of the Baltic Way, activists of initiative groups in Belarus, Ukraine, Lithuania, Latvia, Estonia, Poland, Georgia and Moldova joined arms in solidarity with the people of Belarus. To remind, in 1989 about one quarter of population of the Baltic States – Lithuania, Latvia and Estonia formed a 670-kilometer human chain that connected Tallinn, Riga and Vilnius. It came as a symbolic gesture of people’s solidarity against unaccountable power.

International support. Ukraine received congratulations on the 29th anniversary of the nation’s independence from the President of the U.S., France, Germany, Switzerland, Poland, Hungary, Slovakia, Italy, Kazakhstan, Tajikistan, Egypt and Peru. The king of Saudi Arabia, the queen of the United Kingdom and Pope Francis sent their greetings too. The Office of the President said the list is even longer.

U.S. diplomats in Ukraine recorded a rendition of the Ukrainian song “Oy Khodyt Son Kolo Vikon” (“The Dream Passes by the Windows”).

Foreign Affairs Ministers of Germany and Ukraine, Heiko Maas and Dmytro Kuleba laid flowers at the Commemoration Wall of Fallen for Ukraine. The German Foreign Affairs chief is on a visit in Ukraine.

The wall in question is an actual wall of the Mykhailivskyi monastery covered with a banner displaying photographs of over four thousand servicemen and servicewomen of the Armed Forces, National Guard, and State Border Guard Service fallen in the war with Russia since 2014.