Kyiv, July 29, 2016. Shchastya became the epicenter of combat activities yesterday. Ukrainian troops repelled a militant attack at the blockpost in the area. “Following a mortar fire attack in the morning, a group of pro-Russian militants supported by heavy artillery were attacking Ukrainian position for three hours. The assault was successfully repelled”, said Colonel Oleksandr Motuzyanyk, spokesperson of the Administration of the President of Ukraine on ATO-related issues, at a press briefing at Ukraine Crisis Media Center. 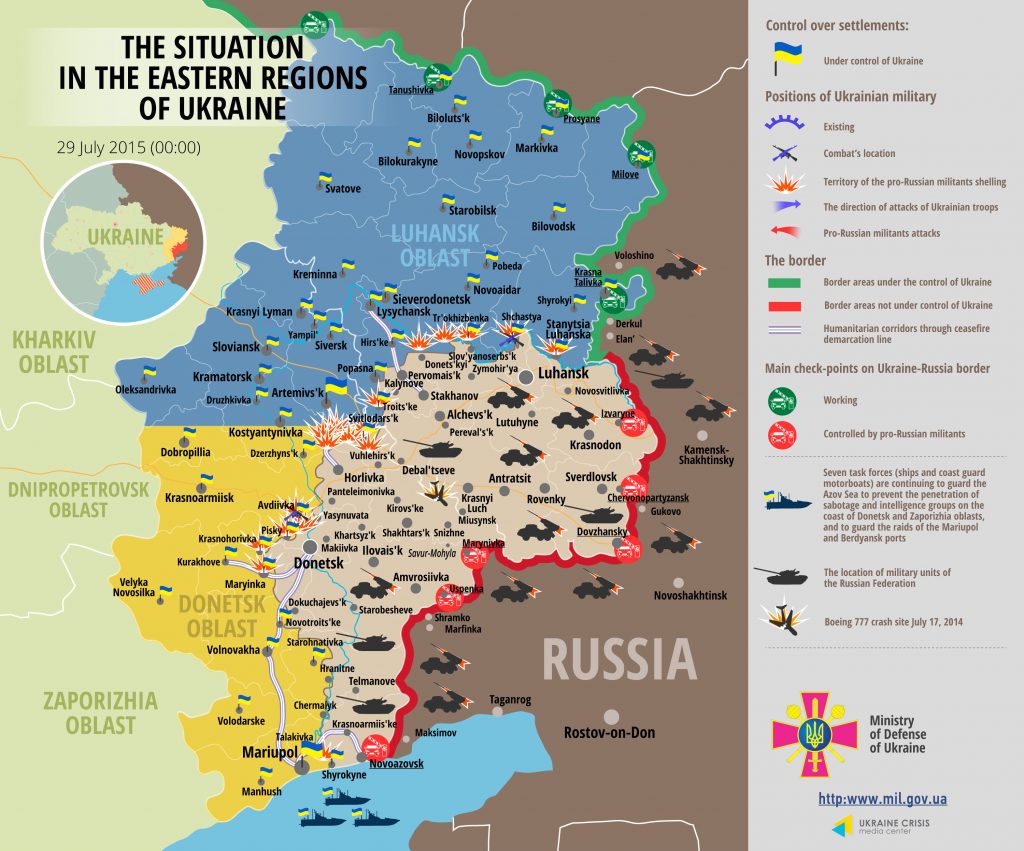 Russia-backed militants used mortars and small arms at nighttime near Stanytsya Luhanska – gas supply to the city has been suspended as a result. Fighting continued along the Bakhmut road, as the Ukrainian positions were shelled from anti-aircraft guns. “The militants shot from the east from the occupied Donetskyi village. Besides, militants committed sporadic provocations north of Krymske and west of Troyitske,” said Col. Motuzyanyk.

In the Donetsk sector, the militants attacked Ukrainian positions east and west from Svitlodarsk as well as areas close to Donetsk and Maryinka. “Active provocations and shelling near Luhanske village lasted about six hours, with active involvement of enemy’s snipers. The situation is also complicated north from Horlivka: militants fired three times from 152mm cannons at Ukrainian positions,” said Col. Motuzyanyk. Ceasefire was generally holding from Dzerzhynske to Verkhnyotoretske. “Only several days after the sunrise are relatively calm. Concentration of enemy’s manpower and heavy armament on the frontline is high from Yasynuvata to Oleksandrivka,” said the spokesperson.

One armed incident has occurred in the Mariupol sector between Lebedynske and Vodyane, five km north from Shyrokyne.

Ukrainian Armed Forces incurred no casualties over the last 24 hours, and two servicemen were wounded in action in the vicinity of Maryinka.

Ukraine’s Security Service detained two men who were trying to cross a demarcation line at the checkpoint near Volnovakha. “These individuals were planning to join the militants. The men were invited by a relative of one of the detained, who is already fighting in the ranks of the militants,” said Motuzyanyk.

The law enforcers also blocked activities of one more company that funded Russia-backed militants. A private pharmaceutical company in Kyiv, which used to be registered in Makieevka, Donetsk region, until recently, delivered cash from drugs and sent it to the militants. “Investigators seized around 20 million hryvnia and documents that confirm the illegal activities,” said Col. Motuzyanyk.

Ukrainian road police stopped a vehicle near Manhush village not far from Mariupol. “They found a “Fort-202” rifle without registration, six boxes of cartridges and three magazines.