Kyiv, July 30, 2015. Russian authorities have demonstrated, once again, the resistance to fair and impartial investigation of the Malaysian Airlines Flight MH17 crash, said Colonel Andriy Lysenko, spokesman of the Administration of the President of Ukraine on ATO-related issues, at a press briefing at Ukraine Crisis Media Center. He commented that the recent UN Security Council would put Russia in disadvantage because of the latter’s intransigent stance. The meeting discussed the establishment of an international tribunal to investigate Malaysian Airlines MH17 flight, which crash-landed in Donetsk region on July 17, 2014.  Despite the majority of council members voting in favor of the establishment of the investigatory committee, Russian envoy Vitaliy Churkin submitted the only vote against the motion, effectively blocking the resolution. 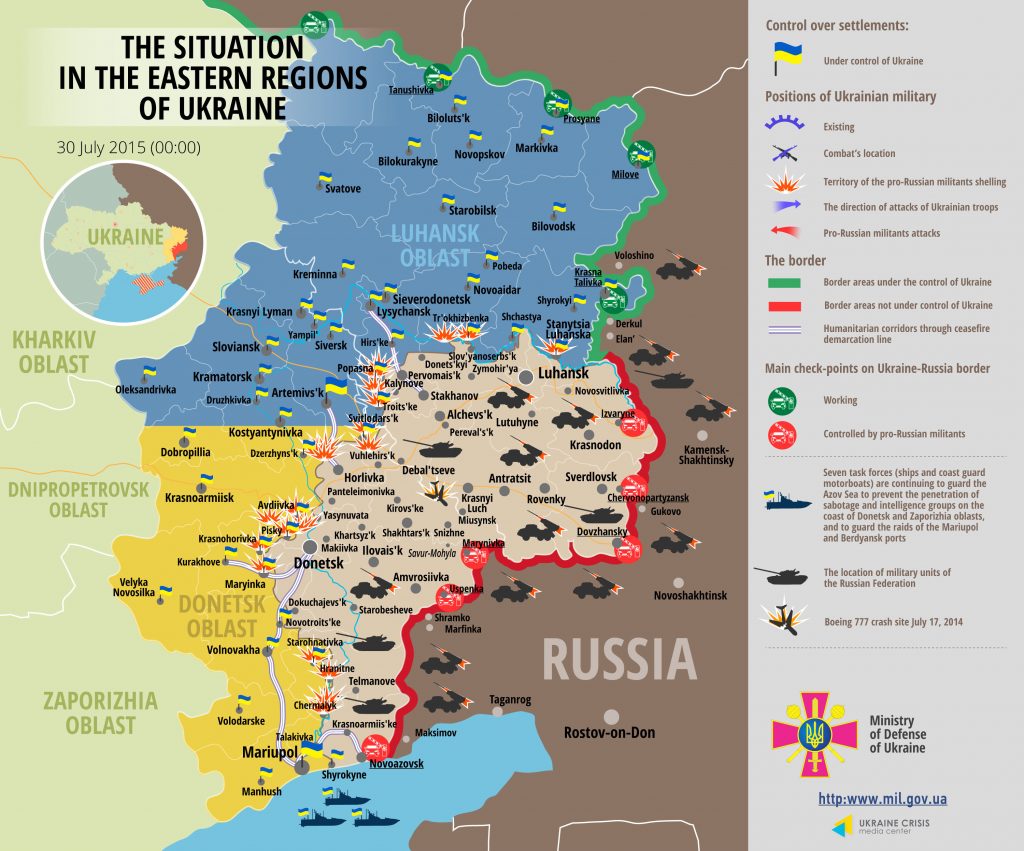 In the Donetsk sector north of Svitlodarsk, no cases of heavy armament usage by militants were recorded. “Militant shelling near Horlivka is intensifying and large artillery pieces have been deployed. Mykolayivka, the area between Horlivka and Artemivsk – Mayorsk and the Leninske – received the most intensive fire.  The enemy has been using nearly all the types of weapons at its disposal to attack our positions, excluding rocket artillery, which they are storing in the residential quarters of Horlivka.

Two men were killed and one woman has been injured as a result of militants attacking the residential quarters of Dzerzhynsk. In addition, a gas pipeline has also been damaged,” said Col. Lysenko.

The situation remains unchanged in the vicinity of Donetsk, as the enemy’s provocations continue along the entire front line from Avdiivka to Maryinka.

In the Mariupol sector, militants shelled Ukrainian positions north of Starohnativka using 122mm howitzers and a tank. Ukrainian forces observed the use of a tank by Russia-backed militants near Hranitne. Two armed provocations took place in the vicinity of Mykolayivka and Chemarlyk. No combat activity took place in the area between Pavlopol to Shyrokyne,” said Col. Lysenko.

In addition, Ukrainian security services detained a member of the self-proclaimed Donetsk People’s Republic in Artemivsk. The detainee has been on the wanted list since December 2014. “The criminal has already admitted to having participated in the armed seizure of the local public prosecution office and district state administration building last year,” said Col. Lysenko. Ukrainian law enforcement also detained another militant in Krasnyi Lyman who was fighting among the ranks of the militants since May of last year.