Kyiv, August 5, 2015. The situation in the ATO zone remains turbulent in the Donetsk sector to the west of the Svitlodarsk Reservoir on the outskirts of Horlivka. At night, a militant reconnaissance group crossed the Siversky Donets river and attempted to break through Ukrainian positions in Leninske. “The attack was repelled. Later in the evening, Ukrainian troops repelled attacks by two more enemy subversive-reconnaissance groups near Verkhnyotoretske. After militants retreated, they conducted mortar attacks on Ukrainian positions,” said Colonel Andriy Lysenko, spokesperson of Administration of the President of Ukraine on ATO-related issues, at a press briefing at Ukraine Crisis Media Center. 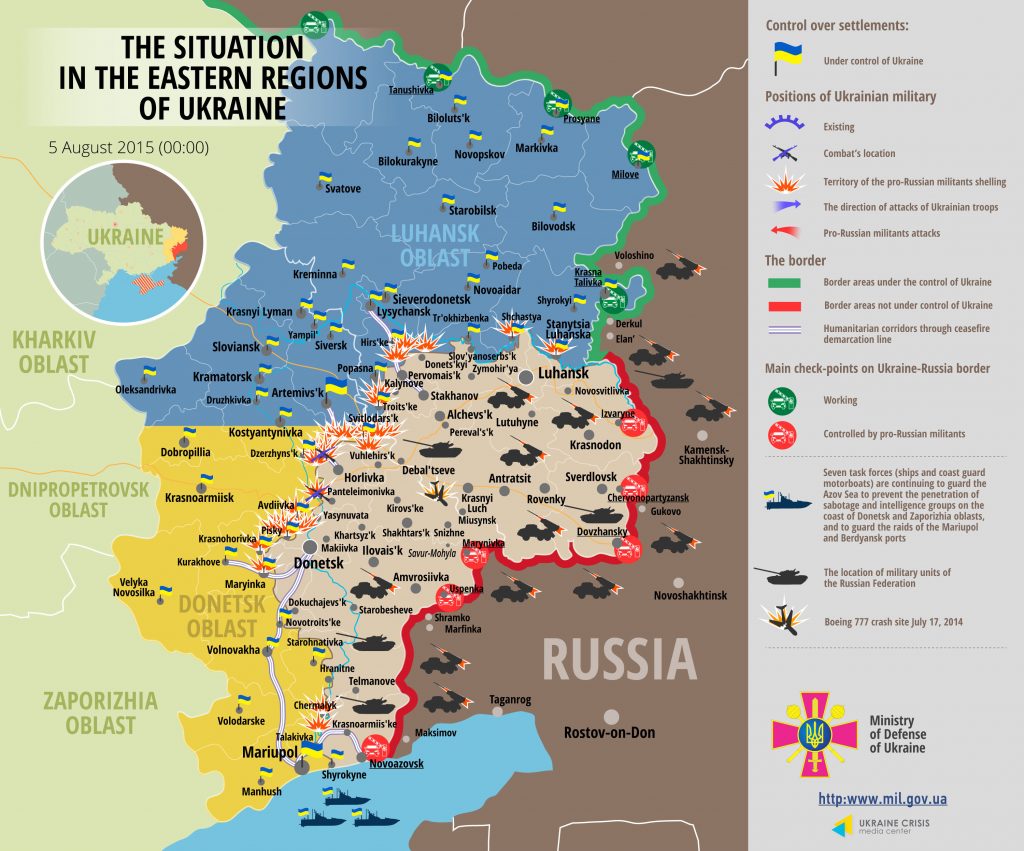 In the Donetsk sector, Russian-backed militants continue regular artillery and mortar attacks on Ukrainian positions along the first and second defense lines near Svitlodarsk. Ukrainian fortifications near Rozsadky were shelled with 152-mm mortars for over an hour and a half. Craters from militant shelling incidents were registered up to 12 kilometers behind the frontline. At around 1 a.m., militants used mortar weapons to fire on Ukrainian positions three times near Novhorodske. Militants conducted minor attacks along the perimeter of militant-held Horlivka. In the western outskirts of Donetsk, combat continues incessantly. “Five incidents when residential areas were shelled were noted. Avdiivka and Opytne were damaged. On exit from Donetsk towards Mariupol, the ceasefire is holding,” noted Col. Lysenko.

In the Luhansk sector, combat intensified again near the Bakhmutska road. Militants fired on Ukrainian positions near Novotoshkivske and Orikhove three times with 120-mm mortars. Sporadic militant attacks were registered along the combat line in Luhansk region, particularly in Stanytsia Luhanska, Shchastya, Zolote and along the defensive line east of Popasna and Troyitske.

The ceasefire held in the Mariupol sector yesterday. Militants fired several times on Ukrainian positions in Chermalyk after midnight and early in the morning using small arms. “Enemy snipers were operating for almost one hour. It was quiet all across the frontline between Novotroyitske and the Sea of Azov after 7 a.m. and until midnight,” added Col. Lysenko.

Ukrainian Armed Forces incurred no casualties over the last day. Seven soldiers were wounded in action on the Bakhmutska road and in Maryinka.