Kyiv, August 10, 2015. At about 3 a.m. on August 10, after an artillery attack, 400 militants with 10 tanks, 10 infantry-fighting vehicles and other equipment conducted an attack near Starohnativka, located within the Volnovakha-Komsomolsk-Telmanove triangle. “Thanks to the professional actions of the Armed Forces, the attack was stopped. The enemy suffered significant losses in manpower and equipment, and was rolled back two-to-three kilometers. During the counter attack, our troops occupied favorable positions, and regained control of strategic heights,” said Colonel Andriy Lysenko, the spokesperson of Administration of the President of Ukraine on ATO-related issues, at a press briefing at Ukrainian Crisis Media Center. 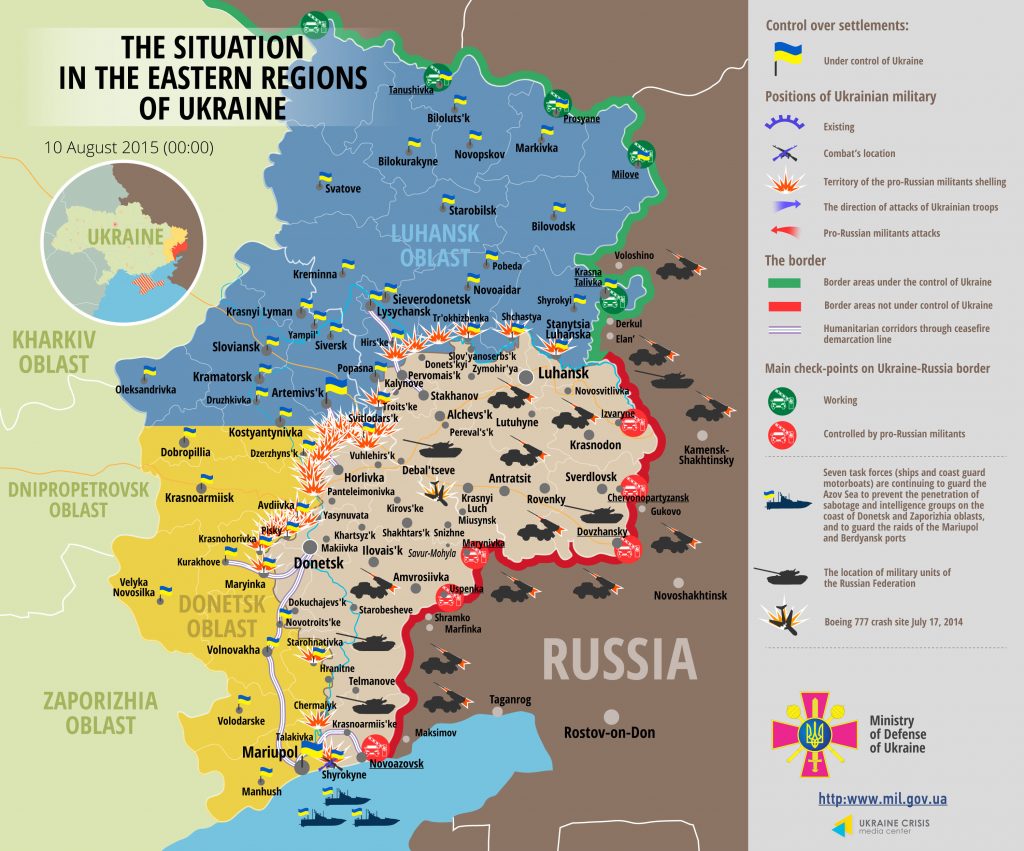 In Luhansk sector, militants continue to fire on Ukrainian advanced fortifications using mortars near the village of Luhanske. Russia-backed militants opened fire overnight from the right bank of the Siversky Donets. The situation in Shchastya was similar, although militants there opened fire by day, and did not use heavy weapons.

Active operations continue north of Bakhmutka. The epicenter of the confrontation is in Krymske, where last night, militants conducted mortar and artillery fire on Ukrainian defensive lines. The Militants’ heavy weapons are concentrated near Slovyanoserbsk, according to Col. Lysenko.

Only occasional attacks were recorded near Trokhizbenka and Novotoshkivske yesterday. “Near Zolote, the enemy carried out only one mortar attack after midnight,” said Col. Lysenko.

In the Donetsk sector, militants fired on Ukrainian fortifications from tanks in Troyitske. According to the Intelligence Service, militants are storing their armored vehicles in Almazna. Late at night, militants fired again with rocket artillery. “The enemy moved grad multiple rocket launchers a few kilometers closer to the front line, and placed them in Pervomayske residential area,” said Col. Lysenko.

The defense line that passes through Luhanske and Lozove remained relatively calm. Militants did not use heavy weapons. However, skirmishes continue north of Horlivka. “The enemy keeps tanks and artillery in the city and fires on the first and second Ukrainian defensive lines. Zaitseve has suffered most and explosions could be heard there almost the entire day,” reported Col. Lysenko.

Kirove and Leninske have yet to see peace, according to Col. Lysenko. ATO forces resumed mortar fire in Novgorodske, where there is a railway station and a national chemical company considered to be a strategic enterprise. The only point of confrontation between Horlivka and Donetsk yesterday was Verkhnotoretske, where militants fired on Ukrainian positions from mortars and artillery for three hours after dawn. In this sector, militants’ heavy weapons are concentrated in Panteleymonivka, where three strategic Donbas roads are located: one to Horlivka, one to Yenakiyeve and the third to Donetsk.

The situation in the western outskirts of Donetsk remains unchanged: Operations continue incessantly. Militants continue to fire on Avdiivka residential areas. In the Mariupol sector, militants fired at Ukrainian troops in Starohnativka using 120-mm mortars, and 152-mm weapons at Orlovske. Militants also fired on Pryovrazhne and Vodiane of Volodarsky district. “These settlements are located 10 kilometers from the front line,” said Col. Lysenko. For three hours yesterday, militants fired on Ukrainian fortifications and residential areas in Lebedynske using 122-mm weapons. According to Col. Lysenko, Militants are storing their artillery in Bezimenne. “Late at night, Ukrainian forces entered into battle with the enemy in Shyrokyne. The clash lasted about an hour. The enemy attack was successfully repelled,” said Col. Lysnko.