Kyiv, August 12, 2015. On the Western outskirts of Donetsk, near Opytne, Russia-backed militants actively attacked with armored vehicles including tanks and infantry fighting vehicles that they had deployed to the frontline in the area of the Donetsk airport. “Militants also used reactive artillery in this area for the first time in several months. “Enemy’s ‘Grad’ multiple rocket launchers (MLRS) deployed to Yasynuvata fired upon Ukrainian troops near Krasnohorivka, located at least 25 km from the rocket launch site,” said Colonel Andriy Lysenko, spokesperson of the Administration of the President of Ukraine on ATO-related issues, at a press briefing at Ukraine Crisis Media Center. 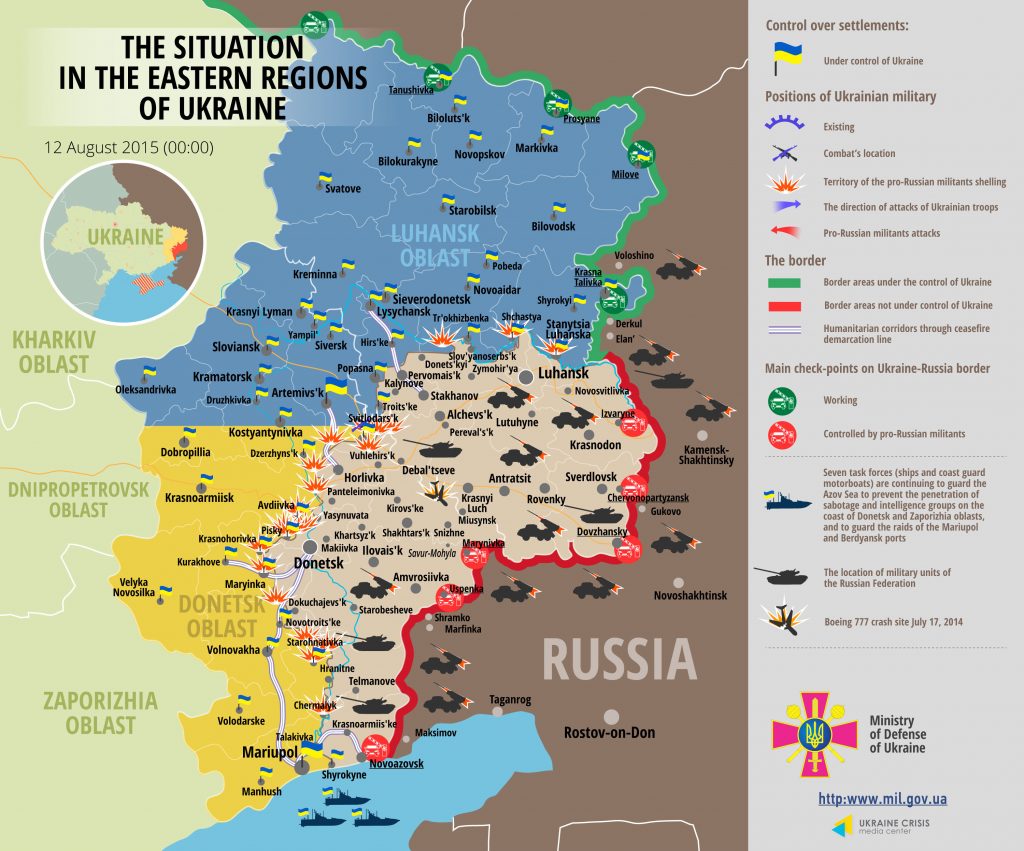 In the Donetsk sector, skirmishes between militants and Ukrainian troops took place near Svitlodarsk along the combat line both during the day and at nighttime. “Ukrainian forces directly engaged in combat with the adversary at around 1 pm. Militants were moving on Ukrainian positions along the road between Debaltseve and Artemivsk. After 20-minutes of fighting the occupiers stepped back,” said Colonel Lysenko. Zaytseve remains the only source of tension on the opposite side of the Svitlodarsk reservoir. Combat actions broke out after 10 pm when militants started firing upon Ukrainian troops with 120-mm mortars and small arms. West of Horlivka, militants mortared Ukrainian positions near Novhorodske. Militant artillery fired upon Ukrainian troops maintaining defensive positions near Troyitske. One hundred fifty two millimeter howitzers were fired by militant groups from Yasynuvata along the frontline. “The enemy fired upon Ukrainian block-posts three times near Berezove while leaving Donetsk in the direction of Mariupol. Over the last weeks, this section of the front was quiet,” added Col. Lysenko.

In the Luhansk sector, militants did not cease firing upon Ukrainian positions near Stanytsia Luhanska, Shchastya and Krymske. Militants fired from the South along key roads. “The enemy keeps using heavy weapons, namely 120-mm mortars, at nighttime,” noted Colonel Lysenko. Yesterday, the western part of Luhansk region between Novotoshkivske and Troyitske remained quiet.

The Ukrainian defensive line between Bohdanivka and Starohnativka was the epicenter of fighting in the Mariupol sector. Militant groups systematically used heavy weapons in this section of the front. Thus, militants engaged in four attacks with reactive artillery between one and three am, one of the attacks being conducted using the powerful ‘Uragan’ – or hurricane – multiple rocket launcher system. Militants also fired from 152-mm howitzers over a 24-hour period. For half an hour, militants attacked Ukrainian forces defending the left bank of the Kalmius river in Chermalyk with mortar and artillery.

“Ukrainian troops registered 12 flights by enemy unmanned aerial vehicles (UAVs) in the ATO zone yesterday. One more UAV of the aggressor-state crossed the administrative border between the occupied Crimea and Kherson region near Chonhar,” noted the ATO spokesperson.

One Ukrainian serviceman was killed in action over the last day, while three were wounded in action. Ukrainian troops suffered these losses near Stanytsia Luhanska and Starohnativka.

Moreover, Mariupol police detained a militant who, after undergoing training at the Oplot militant group camp for about two months, was guarding storage facilities in Dokuchayevsk. According to Col. Lysenko, he was sent to a training camp in Russia to “improve his qualifications,” where Russian instructors were preparing militants for subversive-reconnaissance activities. “The militant was injured during the trip and became useless to his superiors. He returned to the Ukraine-controlled territory where he was detained by law enforcement,” said Col. Lysenko.

Another militant was detained by Ukraine’s Security Service in Kharkiv region. It was detected that the man was fighting against the Ukrainian Armed Forces as member of various militant battalions, including the Makiyivska Sotnya, Vostok and Russian Cossacks groups, and in the past had served a sentence for serious crimes.

Ukrainian special services also continue their work investigating collaborators. Five residents of the Artemivsk district in Donetsk region were detained. The residents were collecting information on deployment locations and numbers, equipment, rotation routes and the movement of Ukrainian forces.