Kyiv, August 14, 2015. In the Mariupol sector, Russia-backed militants reserved to using exclusively heavy weapons, firing at the Ukrainian military fortifications without engaging in close combat. “The enemy fired from howitzers and heavy mortars between Novotroyitske and Talakivka both in the daytime and at night,” said Colonel Andriy Lysenko, spokesperson of the Administration of the President of Ukraine on ATO-related issues, at a press briefing at Ukraine Crisis Media Center. 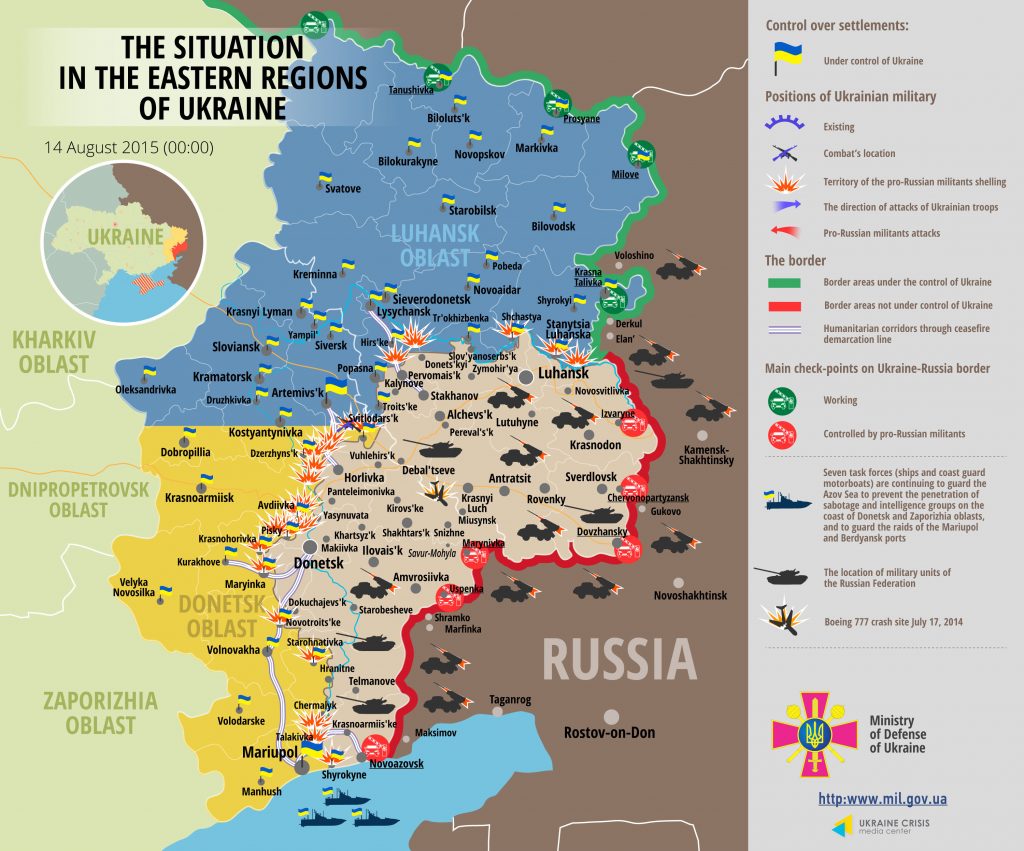 The militants fired at Ukrainian troops near Novotroyitske from 120-mm mortars deployed to Dokuchayevsk. Russian proxy forces used 152 mm artillery and then fired from Grad multiple rocket launchers near Starohnativka. Similar artillery and rocket attacks have been registered in the vicinity of Pavlopil and Orlivske from the militant positions 10-12 km away. At around 10 p.m., the militants fired upon Ukrainian defense lines east of Talakivka by launching powerful attacks from mortars, howitzers and missile systems. Militant heavy weapons were observed close to the frontline being focused in three different sites. Two short-lasting incidents were registered in Shyrokyne.

According to Col. Lysenko, pro-Russian militants are constantly targeting around 10 towns in the south of Donetsk region; they are currently damaged or completely destroyed. “Nineteen civilians, including four children, have been killed in this area since August 2014 due to the militants’ inhumane shelling and armed provocations. Moreover, 54 persons were wounded. Many residents have fled, saving their lives from attacks, yet there are still people who continue to live and work under militant fire,” said the ATO spokesperson.

In the Luhansk sector, most turbulent situation stands in the area of Stanytsia Luhanska. Militants conducted massive mortar and artillery shelling of Ukrainian positions near Bolotene yesterday. The attack was conducted from three different sites on the opposite side of the Siversky Donets river. Three houses and a gas pipeline were damaged as a result of the militant attacks from mortars and grenade launchers. Two clashes combat engagements took place near Shchastya. Furthermore, the militants mortared Ukrainian positions twice in the area of Bakhmut road close to Nyzhne. Short-lasting provocation was registered in Novotoshkivske as well. “The enemy fired twice upon Ukrainian troops in Zolote using the dense residential construction. It was calm on the frontline between Popasna and Troyitske yesterday,” added Col. Lysenko.

The situation was calmer in the Svitlodarsk area – Donetsk sector – as only a handful of provocations from small arms took place in the area. Heavy weapons use has not been registered. On the other hand, the militants focused their activities north of Horlivka, namely by Zaitseve.

Militant subversive groups have been active as well. Ukrainian Armed Forces repelled one attack in the area of Semyhirya. To the west of Horlivka, the militants fired upon Kirove and Novhorodske from small arms and large-caliber mortars and howitzers. The only site the militants fired at 152 mm artillery was the outskirts of Novobakhmutivka between Novhorodske and Avdiivka from their positions in Yasynuvata. “The western outskirts of Donetsk remain the major hotspot on the frontline. The enemy used multiple rocket launchers for a third day in a row, firing at residential areas of Ukrainian towns. Opytne and Avdiivka were targeted yet again. The militants amassed heavy weapons on the Yasynuvata – Yakolivka – Putylivsky forest – Spartak – Donetsk airport line. They are regularly using weapons in combat actions at night,” noted Col. Lysenko.

One Ukrainian serviceman was killed in action and six were wounded in action in the last day.

Ukrainian troops registered one flight of one militant unmanned aerial vehicle (UAV) in Donetsk region. “One more Russian UAV was spotted at the administrative line between the Kherson region and Russian-occupied Crimea,” added Col. Lysenko.