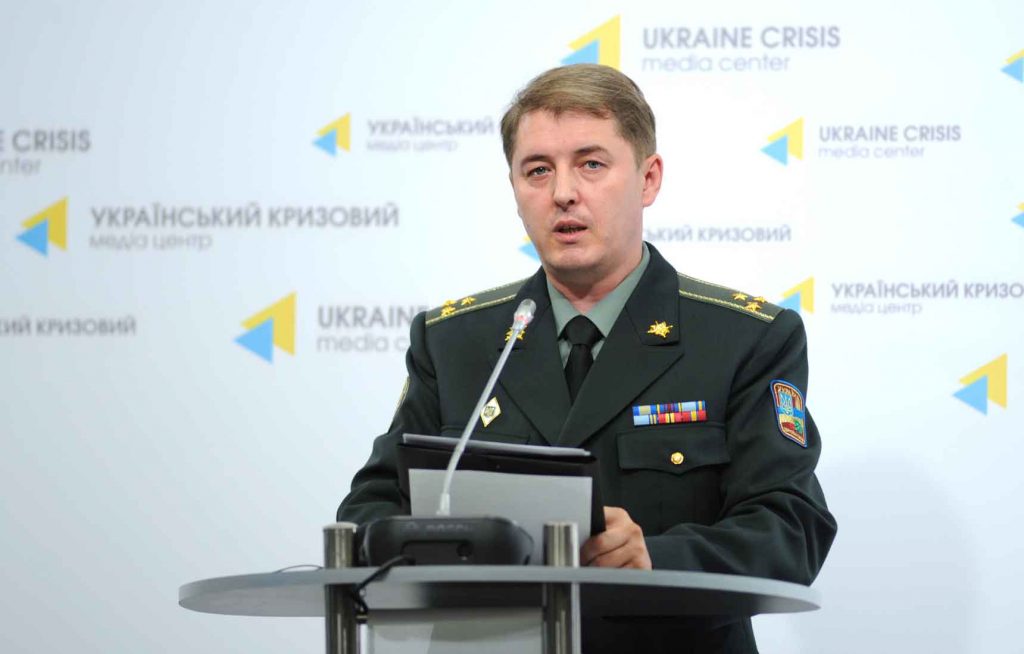 Kyiv, Aug.16 2015 – in Donetsk sector military operations of the highest intensiveness are conducted and the leaders of the militant groups regularly threaten by an onslaught. Colonel Oleksandr Motuzyanyk, spokesperson of the Administration of the President of Ukraine on ATO-related issues, told this at a press briefing at the Ukraine Crisis Media Center. “In Avdiivka, Opytne, Pisky, Krasnohorivka, Maryinka exchange of gun-fire continues day and night. In the occupied areas of Donetsk region, namely in Yenakievo, Torez, Shakhtarsk the curfew time regime was intensified”, – said Col. Motuzyanyk. In Donetsk sector the area of conducting active military operations continues to expand. The extreme point of tension in the north is the village of Kamyanka, which is to the east from Avdiivka, and in the south – the village of Novomikhaylivka of Maryinka district. 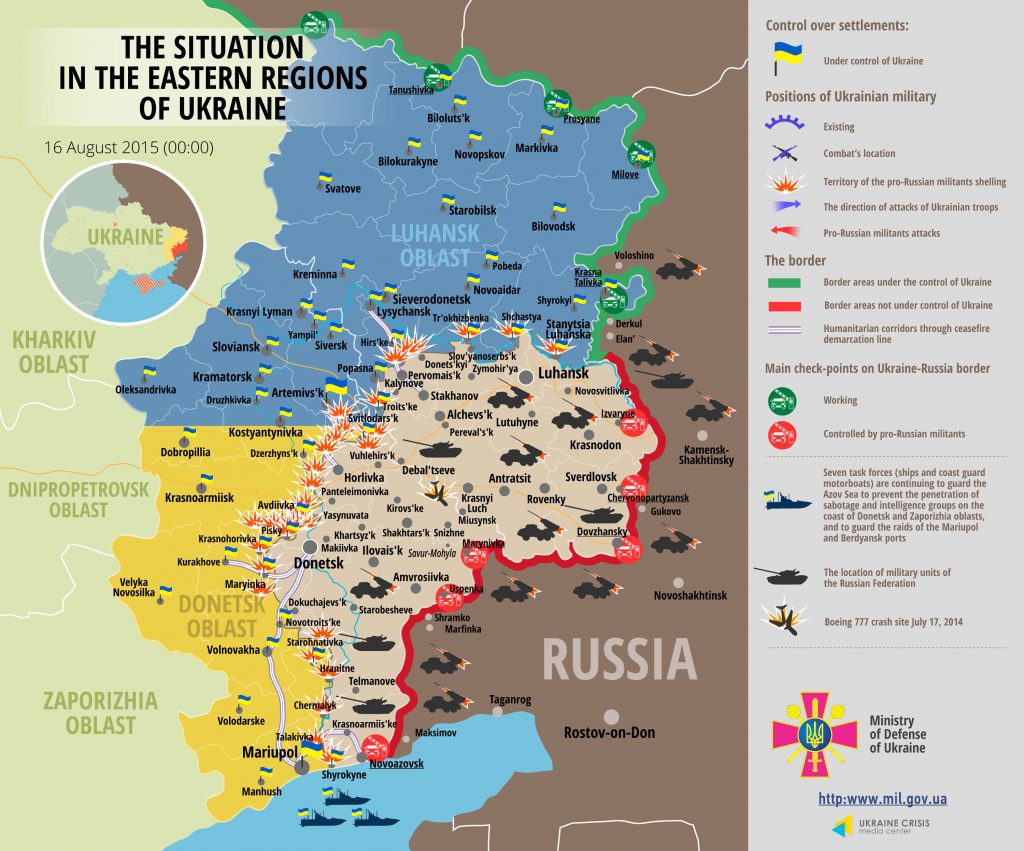 Near Svitlodarsk the militants conduct fire from small arms at the foremost defenses of the ATO forces at the line Rozsadky – Luhanske – Lozove. In the vicinity of Horlivka late in the night Russia–backed militants opened fire at the ATO forces defenses to the north of the city. “The territories from nearly at the suburbs of Artemivsk to our front line in Mayorsk got under the hostile fire. The work of 120 mm mortars, 152-mm howitzers, as well as of tanks deployed in the northern areas of Horlivka and its environs – Zaytseve and Holmisvske – has been registered. ”, – informed Col. Motuzyanyk.

Also the militants three times violated the ceasefire in areas to the west of Horlivka in villages Novhorodske of Dzerzhinsk municipality and more to the south, near the village Troitske.

Besides, at the section of the front near Donetsk the militants three times used the Grad multiple rocket launchers, as a result residential areas of Opytne town got under shelling.

In Luhansk sector Russia-backed militants continue fire from mortars and less often, grenade launchers at the ATO forces positions and residential areas in Stanitsa Luhanska when it gets darker. Near Shchastya the militants open fire even in daytime, no cases of using heavy weapons at this section of the front were observed.

Also the militants shoot provocatively at ATO forces from grenade launchers and similar arms in the vicinity of Bakhmut road, namely, close to Tryokhizbenka and Novotoshkivske. In Orykhove and Zolote as well as in Tritske the militans use mortars.

In Mariupol sector the epicenter of stand-off is the line of confrontation to the east of Starohnativka, where the militant groups 7 times opened fire at the Ukrainian soldiers, including once from Grad multiple rocket launchers. More to the south, in the vicinity of Hranitne, twice the shelling of Ukrainian positions from 120-mm mortars was observed. Several times mortar and artillery shelling was registered near Talakivka, Lebedynske and Shyrokine.

On Aug. 15 in the ATO zone 4 flights of unmanned aerial vehicles were observed.

For the last day and night among the Ukrainian servicemen there were no fatalities due to military operations, 6 people have been injured.

Despite the constant shelling and provocations on part of the militants, the groups of civil-military cooperation managed to deliver 4 tons of humanitarian aid to Volnovakha. Also, the servicemen resumed water supply in Maryinka.

The workers of Donetsk law-enforcing militia who serve in Maryinka district arrested 23-year old member of the armed gangster group “Vostok”. During the search 2 anti-tank grenade launchers and 2 ball grenades were seized from him. Also the Security service of Ukraine (SBU) arrested the militant informer by the code name Rainbow «Rayduga».