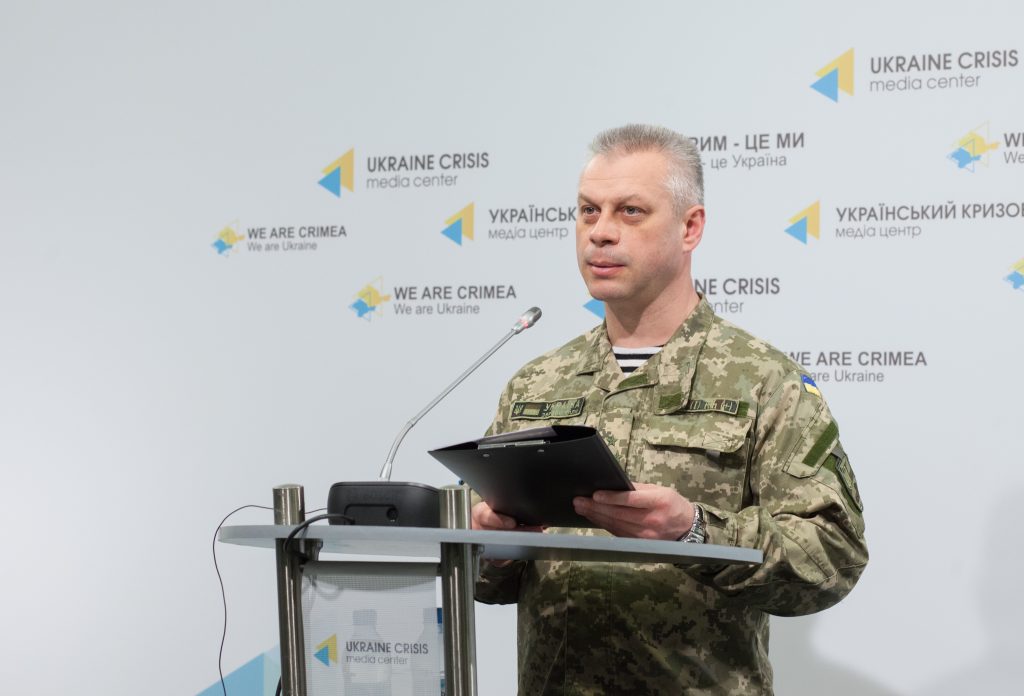 Kyiv, August 17, 2015. Russia-backed militants attacked Ukrainian positions in the outskirts of Mariupol yesterday evening. In particular, the village of Sartana came under heavy fire. Two civilians were killed and six were injured, including a 10-year-old girl. Four buildings were destroyed as a result of shelling as well, said Colonel Andriy Lysenko, spokesperson of the Administration of the President of Ukraine on ATO-related issues, at a press briefing at Ukrainian Crisis Media Center. Col. Lysenko noted that despite tense situation, Ukrainian troops remain in control of their positions, repelling every attack of the militants. 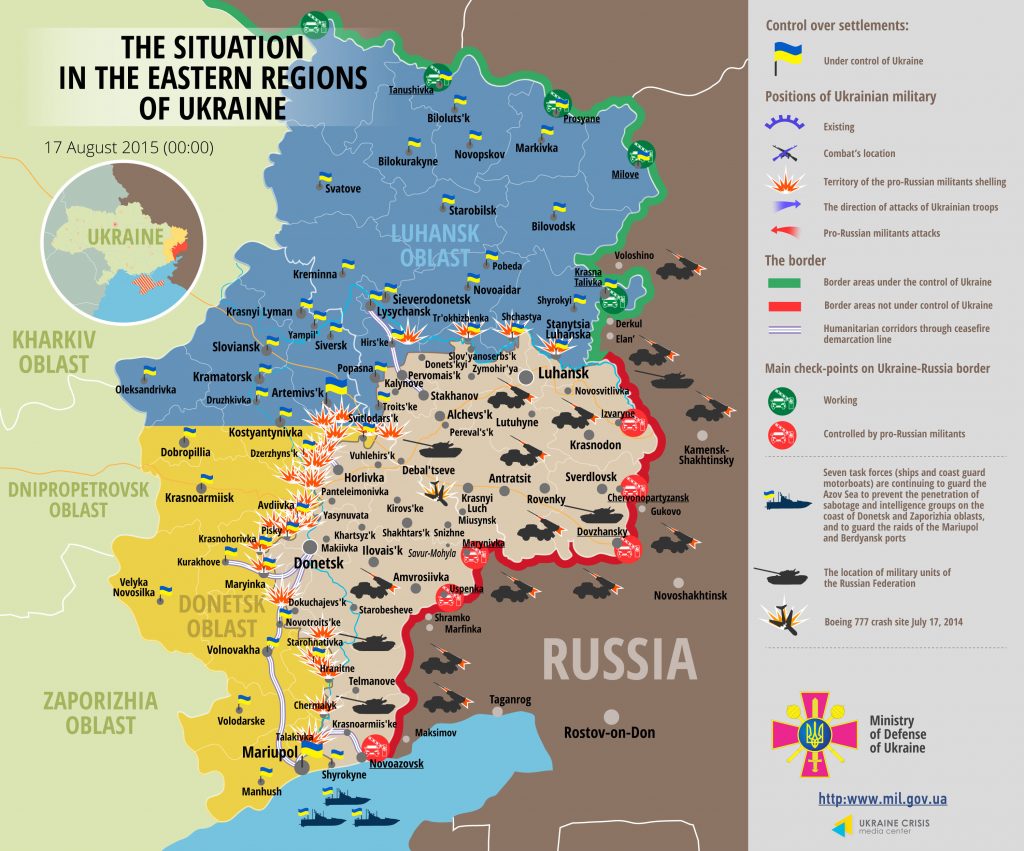 In the Luhansk sector, several armed incidents were registered near Stanytsa Luhanska, The militants intensified their activities in the nighttime, firing from the opposite side of the Siversky Donets river. “The militants stationed in the Mala Verhunka district of the city of Luhansk initiated mortar attacks throughout the day. To the west from Shchastya, hostile activities were registered near Tryokhizbenka and Nyzhne,” noted Col. Lysenko. Russian proxy fighters continued instigating mortar attacks from the southern direction along local roads, especially intense fire exchange took place between 6 a.m. and 7 p.m. to the south of Tryokhizbenka: the militants used mortars and grenade launchers. Col. Lysenko remarked that ceasefire was generally holding at the Novotoshkivske – Zolote – Popasna – Troyitske part of the frontline.

In the Donetsk sector, three armed incidents took place in the area of Svitlodarsk. No cases heavy weapons use has been recorded in the area. Fire exchanges between Ukrainian troops and Russia-backed militants continued in the vicinity of Horlivka and surrounding areas stretching from Svitlodarsk water reservoir to the northeast to Novhorodske to the west. “The most complicated situation is north of Mayorsk and Zaytseve, where the enemy fires at our positions from heavy mortars, artillery and tanks,” said Col. Lysenko. The militants stationed their heavy weapons in residential areas of Horlivka. Ceasefire generally holds in this area during the daytime.

The epicenter of military operations between Horlivka to Yasynuvata was the towns of Verkhnyotoretske and Troyitske. The militants opened fire from heavy weapons ten times at Ukrainian servicemen. “It is on the front line Avdiivka – Opytne – Pisky– Krasnohorivka – Maryinka where over half of all ceasefire violations occur. Military action resumed near southers areas of Donets on the road to Mariupol. The militants launched three attacks – two from heavy artillery and one from Grad multiple rocket launcher – against Ukrainian troops in Taramchuk and Berezove villages,” said Col. Lysenko

In the Mariupol sector, the major standoff occurred along the Bohdanivka – Starohnativka – Hranitne line. The militants used 120 mm mortars and howitzers, fired at the Ukrainian forces from the distance of up to 10 km.  Hostile fire was observed near Talakivka and Sartana too.

Ukrainian servicemen spotted four flights of militant unmanned aerial vehicles (UAVs). “Also the Ukrainian border guards observed a flight of one hostile UAV and two helicopters of the aggressor state on the administrative line between the Crimea and Kherson region,” added Col. Lysenko.

Two Ukrainian servicemen were killed in action and seven were wounded in action in the last 24 hours.

Meanwhile, Ukraine’s law enforcement seized an arms arsenal in the house of a 29-years-old resident of Avdiivka. It contained an anti-tank grenade launcher, 11 under-barrel grenades and more than 300 round of ammunition. According to Col. Lysenko, the offender may face a sentence of up to seven years in jail.