Kyiv, August 18, 2015. Yesterday Ukrainian troops observed relative de-escalation of the military actions in the areas around Horlivka. For the first time in the last three days the number of militant attacks was lower than a hundred. Not a single incident of militant fire at residential areas was registered, said Colonel Oleksandr Motuzyanyk, spokesperson of the Administration of the President of Ukraine on ATO-related issues, at a press briefing at Ukraine Crisis Media Center. 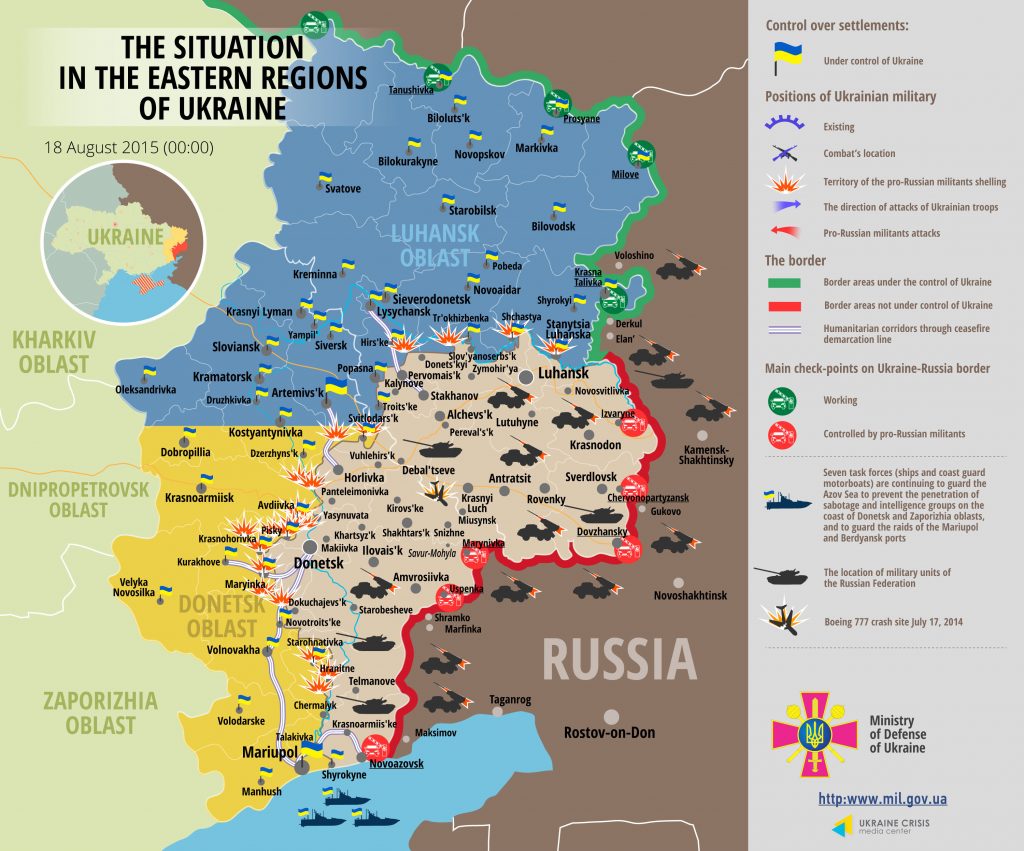 In the Luhansk sector, Krymske village was the epicenter of the conflict. Militants were firing upon Ukrainian positions for seven hours from the south and the east using small arms and 120 mm mortars. Militant armored vehicles arrived to the frontline in the evening. “The enemy did not engage in close combat and our troops did not suffer any losses in the course of fire exchange,” said Col. Motuzyanyk.

Two armed incidents occurred in Stanytsia Luhanska and two more in Shchastya mostly in the dark time of the day. Heavy weapons were not used in this part of the front, however, urban infrastructure and other civilian objects were damaged in Stanytsia Luhanska and adjacent towns. Militants also mortared Ukrainian troops near Orikhove three times in the morning, firing from the southern direction at five km distance.

In the Donetsk sector, militants did not use heavy weapons in the area of Svitlodarsk and Horlivka, but instigated minor provocations: six incidents were registered near Luhanske and Zaitseve. Between Horlivka and Donetsk, militants fired at the key Ukrainian positions from large-caliber artillery. The militants used mortars and howitzers to attack Kostiantynivka – Donetsk and Krasnoarmisk – Horlivka railway junction.

Situation is increasingly tense near Donetsk. Active combat actions and engagements took place close to the frontline, while artillery attacks of the Ukrainian positions were conducted throughout the day. The militants continued amassing heavy equipment and manpower in Donetsk, Spartak, Yasynuvata and near the airport area. Militant activity was registered south of Donetsk again. “Militants shell our defense line south of Maryinka from military hardware deployed to Olenivka. It is worth reminding that Donetsk – Volnovakha – Mariupol road and railway run through this area,” added the ATO spokesperson.

In the Mariupol sector, military actions are conducted near the defense line Starohnativka – Hranitne. Militants reserved to attacks mortars and artillery from adjacent villages and heights over the last day including once with Grad multiple rocket launcher. “Most intense combat actions were conducted between 1 p.m. and 7 p.m.,” noted Col. Motuzyanyk. Ceasefire was holding south of Hranitne and at the Azov Sea coastline.

One Ukrainian serviceman was killed in action and one got wounded in action in the last 24 hours. Col. Motuzyanyk reported that these casualties were incurred near Donetsk.

Ukraine’s Security Service detained a militant in Luhansk region who was trained as a subversive in one of the military sites that belongs to the self-declared “Luhansk People’s Republic” (“LPR”). He was assigned to plan, prepare and conduct terrorist acts against the Ukrainian Armed Forces and civilians. The militant confessed that his activities were coordinated by the Russian security services. “Those militants who laid down arms voluntarily and surrendered can be freed from criminal liability if they cooperate with Ukrainian law enforcement. Militants who did not commit murders, torture, rape and other grave crimes, and sincerely intend to correct their mistakes, can be freed from liability and start from scratch on the territory of Ukraine. In 2015, over 60 former militants returned to their families and were freed from criminal liability under these conditions,” noted Col. Motuzyanyk.