Kyiv, August 20, 2015. Situation remained tense on the frontline between Horlivka and Donetsk yesterday. “Between 2 a.m. and 3 a.m., the enemy fired at our positions near Novobakhmutivka from Grad multiple rocket launchers. According to the intelligence report, the militants deployed their military equipment in Mineralne located between Yasynuvata and Donetsk,” said Colonel Oleksandr Motuzyanyk, spokesperson of the Administration of the President of Ukraine on ATO-related issues, at a press briefing at Ukraine Crisis Media Center. 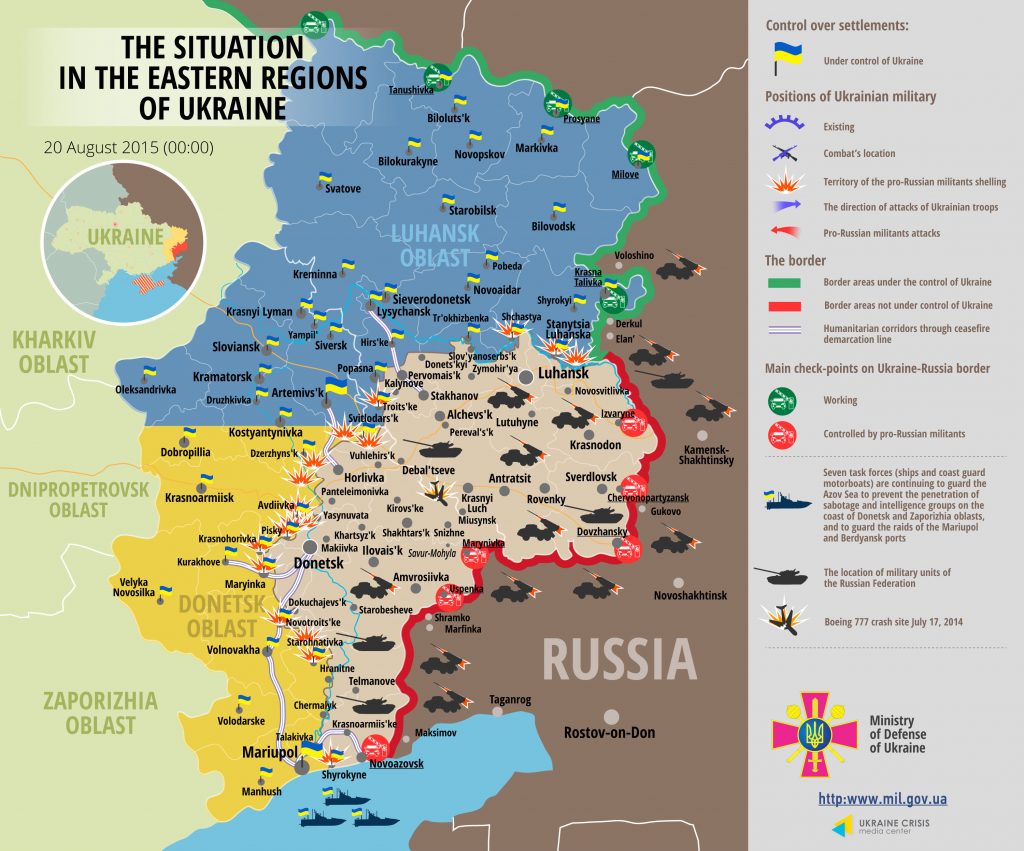 According to Col. Motuzyanyk, three ceasefire violations were registered near Svitlodarsk and Horivka, namely in Lozove, Travneve and near Novhorodske. One incident of heavy weapons use by militants has occurred between Avdiivka and Maryinka, as the militant tank fired at Maryinka at around 6 a.m. Skirmishes between Ukrainian troops and Russia-backed fighters continued on the frontline in Opytne, Pisky, Krasnohorivka and Maryinka.

In the Luhansk sector, military actions were ongoing only on the eastern and western parts of the region. The militants instigated five armed provocations with grenade launchers, firing from the right bank of the Siversky Donets river in the area of Bolotene, Stanytsia Luhanska and Shchastya. No military action has been observed between Stary Aidar and Popasna yesterday. “The militants are planting mines and conducting subversive activities in the area of militant-controlled Pervomaysk and its outskirts. As a result, our troops suffered losses near Orikhove and Popasna yesterday,” noted Col. Motuzyanyk. Four militant attacks were delivered upon Ukrainian fortifications near Troyitske village; militants fired from their positions close to Kalynove.

In the Mariupol sector, Ukrainian defense section of Novotroyitske – Bohdanivka – Starohnativka witnessed most active military action. The militants conducted four mortar and artillery attacks mostly in the daytime, yet they did not engage in direct combat instead firing from howitzers and Grad multiple rocket launchers from a distance. The militants also mortared Pavlopil and conducted a short-lasting attack in Shyrokyne,” said Col. Motuzyanyk.

No flights of militant unmanned aerial vehicles (UAVs) were observed in the ATO area yesterday. Ukrainian border guards noted one UAV at the administrative line between the Russia-occupied Crimea and Kherson region.

Four Ukrainian servicemen were killed in action and 14 were wounded in action over the past day.

Ukraine’s law enforcement detained two residents of Donetsk region suspected of supporting militants. A large number of bank cards, with track records of cashing in over one million hryvnia, were seized from them.

Ukraine’s Security Service (SBU) detained a militant in Luhansk region. According to the ATO spokesperson, he is a native of the Rostov region, Russia, who was recruited by the militants from the self-declared “Luhansk People’s Republic” (“LPR”). The detained confessed that he was passing intelligence data to the militants on Ukrainian forces positions in Stanytsia Luhanska and neighboring towns as well as performed the role of artillery spotter for them. “At the same time one more militant decided to turn himself up to the Ukrainian law enforcement and start a new life thanks to the SBU program for return of citizens to government-controlled territory. He returned to his family in his native town,” noted Col. Motuzyanyk.