Kyiv, August 26, 2015. Russia-backed militants attacked Avdiivka using artillery yesterday evening in the most recent installment of ceasefire violations. The firing was conducted from 122 mm artillery located in Spartak village. Several houses and power supply lines were damaged. A shell also exploded on a children’s playground. “During the course of these skirmishes, the enemy also opened fire several times from heavy mortars, tanks and artillery whilst targeting our frontline positions in Opytne, Vodyane and Pisky,” said Colonel Andriy Lysenko, spokesperson of Administration of Ukraine on ATO-related issues at a press briefing at Ukraine Crisis Media Center. 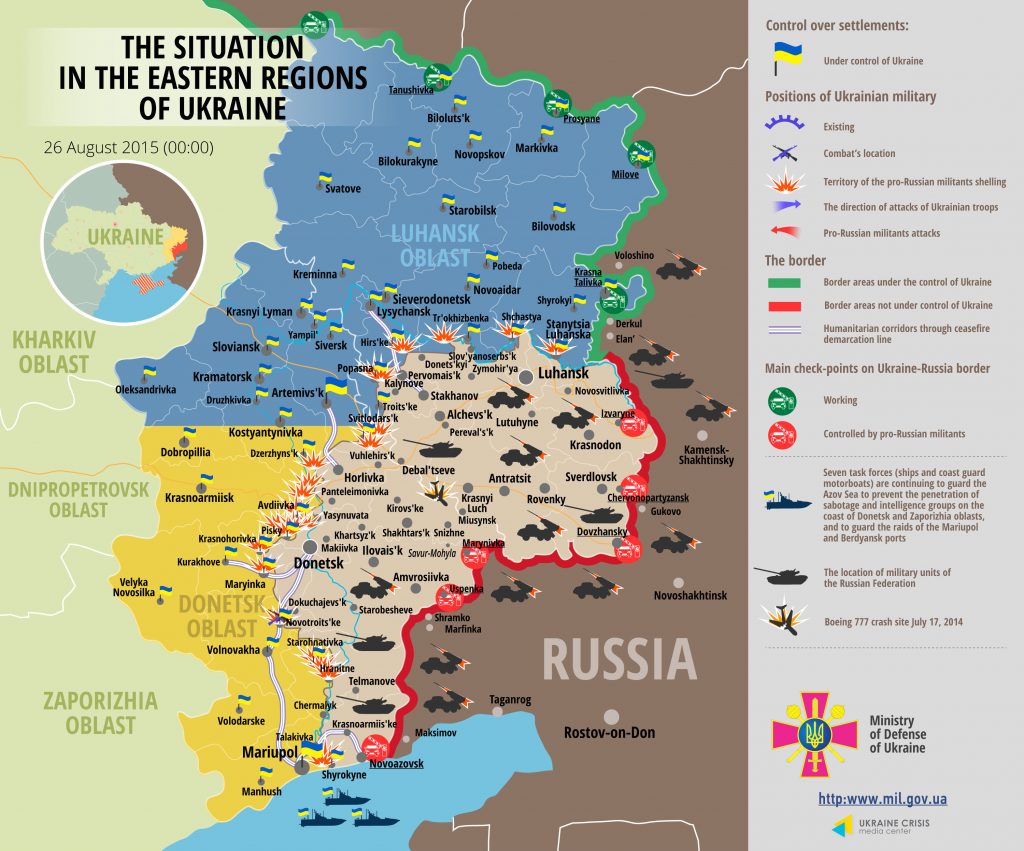 The situation in the Donetsk sector escalated in the area of Svitlodarsk close to the frontline. Ten skirmishes occurred yesterday along the line Rozsadky – Luhanske – Lozove. Ukrainian positions in Luhanske were fired upon from 152 mm howitzers yesterday morning. Militants deployed their forces the town of Vuhlehirsk, which is under their control. “The ceasefire is holding almost perfectly well in the area of Horlivka, while only one incident of mortar shelling was registered on the South-Western outskirts of the city near Novhorodske,” noted Col. Lysenko. Ukrainian positions at the first and second defense lines were attacked twice with artillery between Horlivka and Donetsk. Fire was conducted from Krasny Partyzan located outside Horlivka and from Yasynuvata. The combat situation in the area of the Donetsk airport did not change, while the Intensity of militant fire considerably increased between the roads running from Donetsk to Dnipropetrovsk, and Donetsk to Zaporizhzhia. According to the ATO spokesperson, a considerable amount of militant forces are amassed in Staromykhailivka and Oleksandrivka, as well as in the Donetsk proper. Skirmishes between militant groups and Ukrainian forces occurred both during the daytime and at night.

In the Luhansk sector, militants conducted four attacks using mortars and grenade launchers near Stanytsia Luhanska and Shchastya. At the same time, two militant provocations occurred near Krymske. Ukrainian positions outside Orikhove on Bakhmutska road also came under militant fire conducted from grenade launchers. Another attack came from the South near the partly militant-controlled Zolote. “Two enemy mortar shelling incidents also occurred near Popasna. Two locations on our defense line were fired upon for over half of an hour,” said the ATO spokesperson.

In the Mariupol sector, Ukrainian fortifications are being attacked with artillery and mortars from both middle and long range. Militants conducted eight mortar attacks on Ukrainian positions at the Starohnativka – Hranitne defense line. The situation on the frontline near the Sea of Azov has escalated, seeing militants fire upon Ukrainian positions in Lebedynske and Sopyne with 122 mm howitzers between midnight and 1 a.m. yesterday. After the incident, a period of calm was held the rest of the day near the sea. “Ukrainian troops also repelled an attack by a militant subversive reconnaissance group near Novotroyitske in the evening. The subversives were trying to get through the frontline. Following 10-minutes of fighting the enemy retreated,” noted Colonel Lysenko.

Two Ukrainian servicemen were killed in action, while ten were wounded in action over the last day.