Kyiv, August 31, 2015. The ceasefire in the East of Ukraine held yesterday. It was the first time in many days that no shelling was recorded in numerous hotspots – in Stanytsia Luhanska, Schastya, Zolote, Popasna, Maryinka and the entirety of Mariupol sector. “It is the second day in a row that the enemy has not deployed heavy weapons, mortars and armor. Moreover, there were no losses amongst the ranks of the Ukrainian Armed Forces over the past 24 hours,” said Colonel Andriy Lysenko, spokesperson of Administration of the President of Ukraine on ATO-related issues, at a press briefing at Ukraine Crisis Media Center. 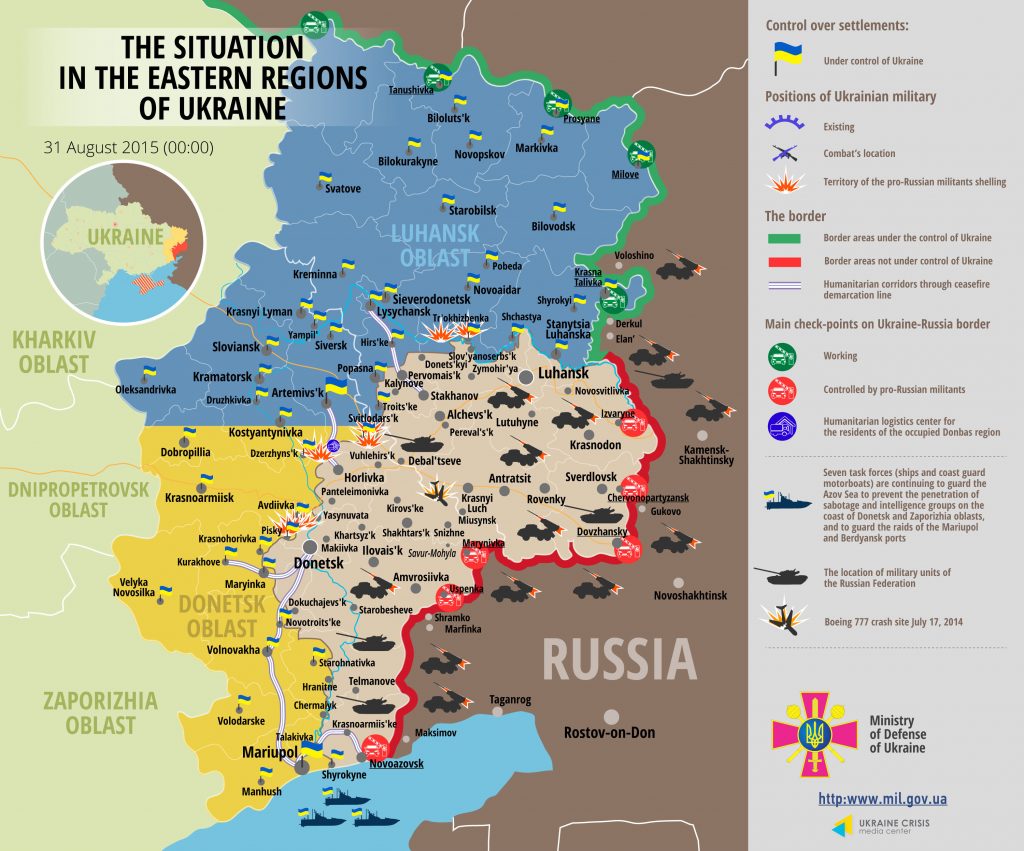 The situation escalated north of Bakhmutivska road. “Militants delivered fire from grenade launchers for 15 minutes near Tryokhizbenka, from the opposite bank of the Siverskyi Donets river,” said Col. Lysenko. There was a brief armed provocation instigated by militants between Slovyanoserbsk and Krymske.

The situation was comparatively severe near Svitlodarsk. Up to seven armed provocations with the use of small arms and grenade launchers occurred on Ukrainian frontline positions near Lozove and Luhanske. Only one armed incident was observed near Horlivka where militants fired using light arms. It was calm in the area between Horlivka and Yasynuvata yesterday. “Combat activity in the vicinity of Donetsk took place only on the frontline from Avdiyivka to Pisky. Shots were delivered at night,” informed the ATO spokesperson.

Militants did not shell Ukrainian positions in the Mariupol sector yesterday. “Two Ukrainian troops were injured as a result of a booby trap explosion during combat mission,” said Col. Lysenko.

Five Ukrainian servicemen were wounded in combat in the past 24 hours.

Five flights by militants’ unmanned aerial vehicles were observed in the ATO zone.

Ukraine’s Security Service seized two large arsenals of illegal weapons in Luhansk region. It was established that the weapons were planned to be smuggled out of the ATO area to the government-controlled territory of Ukraine. One cache was located near Bakhmutivka where a vehicle carrying an under-barrel grenade, TNT blocks, anti-infantry mines, hand grenades and cartridges have been found. The second batch has been seized in on the premises of an abandoned factory in Polovynkyne. “Law enforcement found 33 kilograms of TNT blocks, 43 grenade launchers, seven rockets for Grad multiple rocket launchers, large numbers of light arms and cartridges,” said Col. Lysenko.