Kyiv, September 8, 2015. Yesterday afternoon separatists’ subversive reconnaissance unit crossed the Siversky Donets river in Luhansk area. This happened in the area near the Ukrainian-Russian border – between Novokyivka and Syze. The militants tried to bypass the Ukrainian stronghold and advance deep into the territory controlled by the ATO forces. “Ukrainian military engaged in a combat, and the enemy was forced to retreat. During the combat one Ukrainian soldier was killed and two more were wounded. On other front areas the ATO forces suffered no losses,” informed spokesman of Administration of the President of Ukraine on ATO-related issues Colonel Oexandr Motuzyanyk at a briefing at Ukraine Crisis Media Center. It was quiet along the delimitation line from Stanytsya Luhanska to Svitlodarsk yesterday. 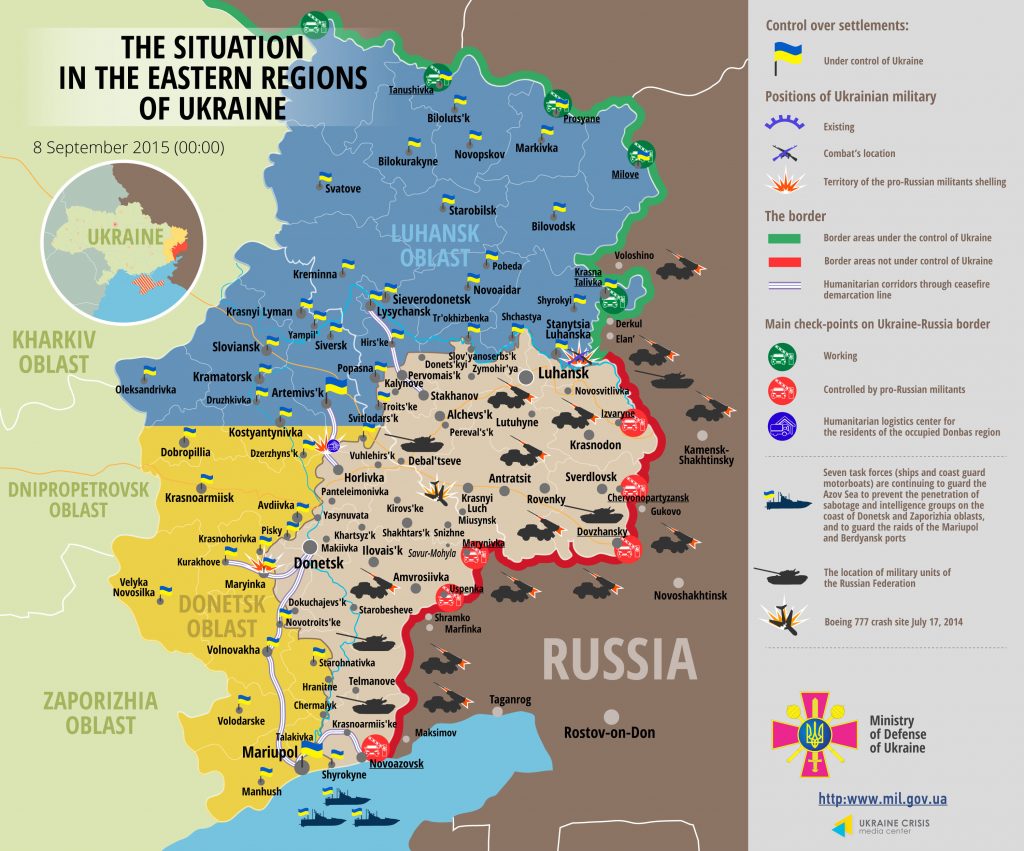 There was one provocation of militants in Donetsk area near Mayorsk. Russia-backed militants fired about 20 minutes from small arms. Yesterday the truce was observed in other suburbs of Horlivka and all the way to Yasynovata. “For the first time from May 26, 2014 it was absolutely quiet at Donetsk airport,” pointed out Colonel Motuzyanyk. In the evening, militants held a mortar attack in Maryinka. They fired from the Petrovsky district of Donetsk.

Just like before, it is absolutely quiet in Mariupol sector. “Yesterday Ukrainian military recorded two flights of enemy drones near Novoaydar in Luhansk region,” said the APU spokesman on ATO-related issues. Security Service in Zaporizhya detained four local residents who are suspected of relations with the “DPR” gang. Its leader is a criminal investigation officer of a district police office in Zaporizhya region. He recruited people for collecting defense-related information for the benefit of militants. “The leader also had to organize a series of terrorist attacks in the region. For their implementation the group members established supply of ammunition and explosives from the antiterrorist operation area,” explained Olexandr Motuzyanyk.

The police found two ammunition and explosives storages in Dzerzhinsk, Donetsk region. A local resident turned the garages into “arsenals.” The following arsenal was taken away: 3 kg of TNT and almost 500 grams of plastid, 1 and 3 anti-tank landmines, 4 grenade launchers RPG-22 “Fly”, 16 grenades, more than 6,000 small arms ammunition and other military equipment. “Underground gunsmith” explained that his acquaintances had brought all these things for storage,” said the APU spokesman on ATO-related issues.

Another cache with weapons was found in the city of Vodyane which is located near the Donetsk airport. Law enforcement officers took away 11 grenades, 22 mortar shells, 10 tank shells, 12 grenades and 70 grenade ammunitions for under-barrel grenade launchers and powder charges to five tank shells.”According to the intelligence reports, this cache was organized by the enemy’s subversive reconnaissance unit,” said Colonel Motuzyanyk.