Kyiv, September 18, 2015. Only one ceasefire violation by the adversary was registered yesterday. Militants were firing from small arms for about 10 minutes near Lozove located to the South of Svitlodarsk. “Occupants were not active in other parts of the frontline,” said spokesman of Administration of the President of Ukraine on ATO-related issues Colonel Andriy Lysenko at a press briefing at Ukraine Crisis Media Center. Flight of a hostile unmanned aerial vehicle was registered near Kostyantynivka. 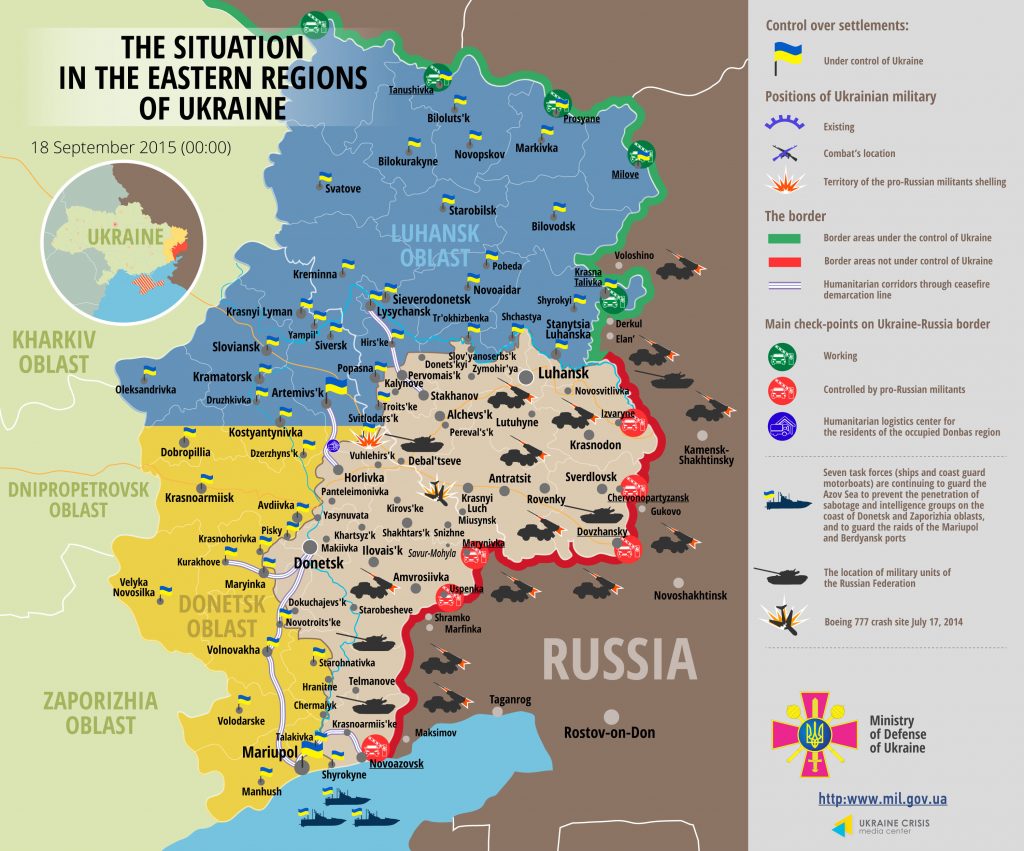 Yesterday two groups of Ukrainian troops hit explosive devices. It happened near the railway station of Mayorsk located near Horlivka and in the area of Starohnativka, Volnovakha district in Donetsk region. Two Ukrainian servicemen were killed and five were wounded. “We remind that since the beginning of the ATO military sappers disposed 18,5 thousand pieces of explosives. Fifty eight objects have been demined, 585 km of roads and 17 km of railway tracks have been cleared,” noted Colonel Lysenko.

OSCE Special Monitoring Mission notes calm situation on both sides of the combat line in Donbas. However, mission staff members are limited in executing their monitoring functions. The mission’s report of September 14 notes that the “LPR” militant group keeps impeding the mission staff in monitoring the major part of territory close to the border with Russia. “Moreover militants are openly limiting movement of the mission staff along the territories not in control of the Ukrainian government,” noted ATO spokesman.

Ukraine’s Security Service blocked a communication channel in Poltava that militants used to get in touch with their Russian curators. Law enforcement staff blocked illegal work of the equipped telecommunication complex. “The perpetrators used it to get the incoming phone traffic from abroad exploiting the IP telephony system and omitting international switching centers,” explained Colonel Lysenko.