Kyiv, September 24, 2015. It was absolutely quiet in the Donetsk and Mariupol sectors in the ATO zone yesterday. Ceasefire violations were only registered in the Luhansk sector. “Three hostile armed provocations took place east of Krymske located to the north of Bakhmutska road yesterday in the evening. Adversary used small arms, enemy snipers were also firing,” said spokesman of Administration of the President of Ukraine on ATO-related issues Colonel Andriy Lysenko at a press briefing at Ukraine Crisis Media Center. 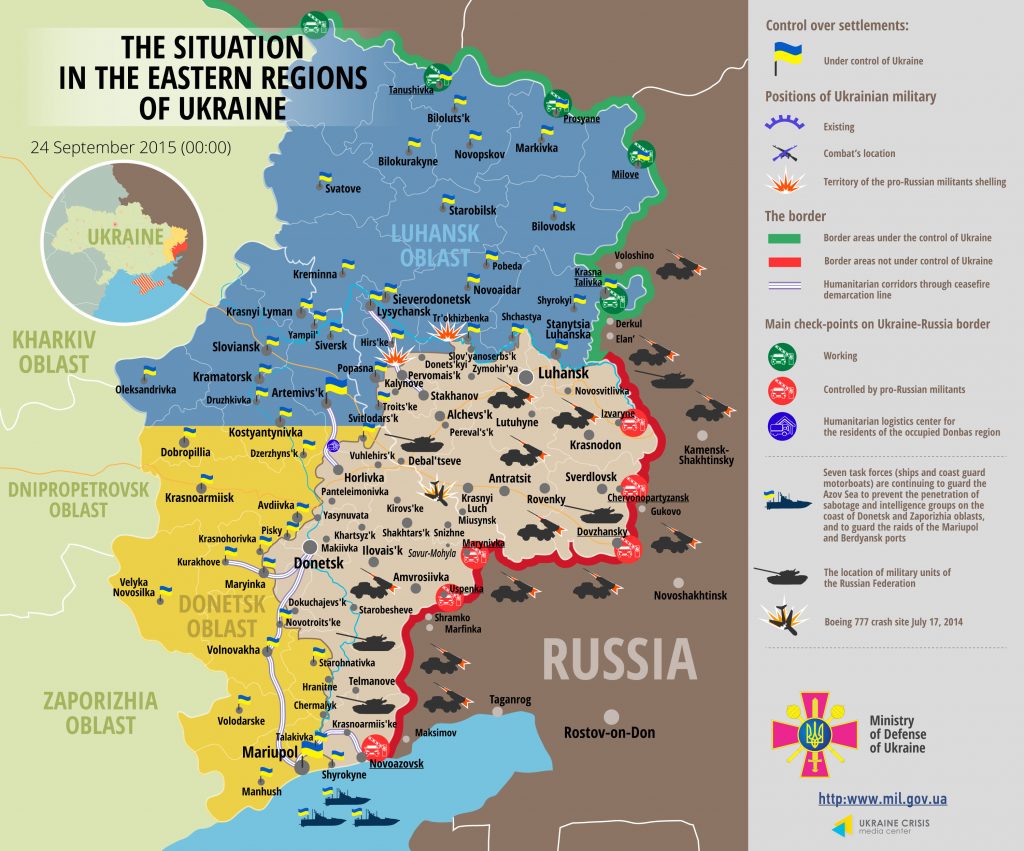 Near Zolote militants fired upon Ukrainian troops that were patrolling the delimitation line in a Cougar armored vehicle. “Thanks to precise return fire and solid armor our troops were not hurt, the enemy stepped back to the South towards occupied Pervomaysk,” said Colonel Lysenko.

One Ukrainian serviceman was killed and two were wounded having tripped a mine near Bakhmutska road.

According to Colonel Lysenko the Joint Control and Coordination Center reports that militants plundered three plants: “Promcement”, feed stuff plant and bread factories. The militants ruined the premises, dismantled the equipment and took it away. In temporary occupied Horlivka occupational administration and militants are taking away equipment and metal from plants as well as instigate arsons. Only three coal mines are operational in Donetsk, there is no money provided to service the equipment. “Plundering of Donbas is encouraged by Russian authorities as the border service of Russia’s Federal Security Service does not impede the smuggling of metal scrap across the border,” noted ATO spokesman.

Ukraine’s Security Service detained an administrator of anti-Ukrainian social network groups. Dnipropetrovsk native, former staff member of the dissolved special police force Berkut he was spreading anti-Ukrainian propaganda in social networks at the order by militants. “The detained was actively spreading materials that sought to derail mobilization and destabilize the situation in the country, was openly calling to support militants’ malicious actions and propagated separatism,” explained Colonel Lysenko.