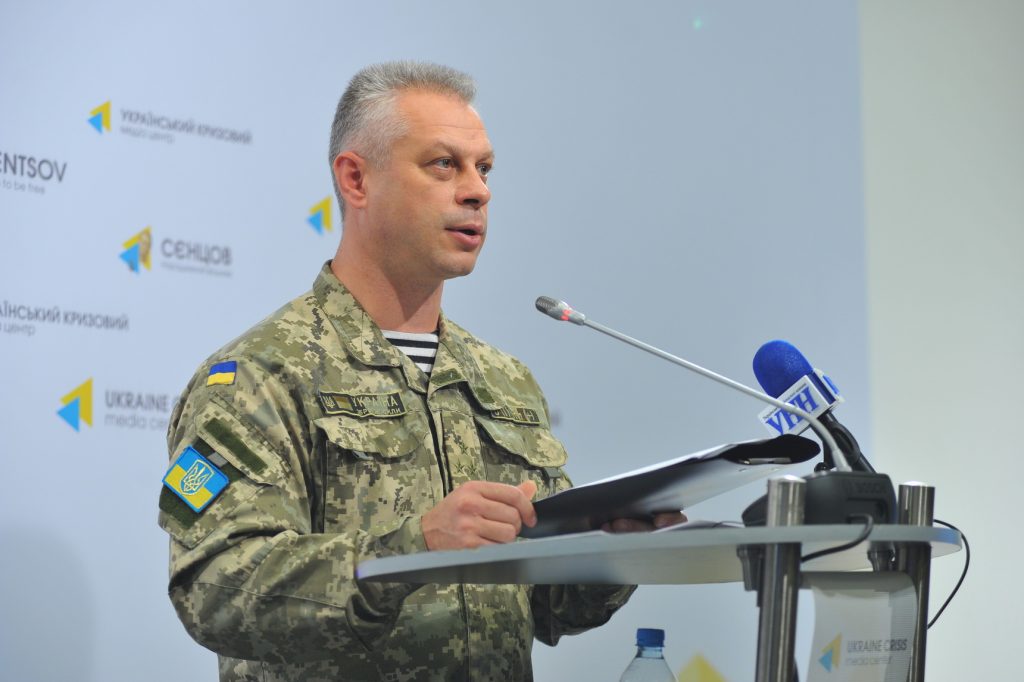 Kyiv, October 10, 2015. A new humanitarian logistic center was opened near Novotroyitske checkpoint on the Mariupol-Donetsk road. “People living in temporarily occupied territories will have an opportunity to purchase foods at market price, cash money or buy medicine. The checkpoint was constructed in line with an improved system to reduce waiting time for people,” said spokesperson of Administration of thePresident of Ukraine on ATO-related issues Colonel Lysenko at a press briefing at Ukraine Crisis Media Center. Military border guards jointly with the State Fiscal Service officers will guard the checkpoint and logistic center.

Ukrainian troops recorded no attacks from the pro-Russian militant groups yesterday. Ukrainian Armed Forces incurred no losses and no troops were wounded in combat.

Ukrainian army continues withdrawing weapons from the frontline, cannons below 100mm in particular. “OSCE Special Monitoring Mission observers are monitoring the procedure. This stage will take 48 hours following which the withdrawn artillery will be verified. According to the General Staff of the Armed Forces of Ukraine, it is planned to finish the withdrawal stage by October 18,” said Col. Lysenko.

Ukraine’s Security Service detained a militant from the self-proclaimed ‘Donetsk People’s Republic’ (DPR) in Dnipropetrovsk region. According to Col. Lysenko, a 35-year-old local inhabitant was trying to organize a ‘guerilla band’ to commit subversive and terrorist acts in western Donbas. Using Russian social media, the criminal was transferring information to the militants regarding location and movement of Ukrainian troops and carrying on propaganda against Ukraine. Two F1 grenades and RGD-5 were seized from the criminal when he was trying to use them against Ukrainian law enforcement officers.

Ukrainian National Guard officers detained another militant in Volnovakha. Ukrainian troops checked documents of a young man who was trying to avoid the checkpoint and was visibly nervous. “The man’s passport lacked pages for special marks where the self-proclaimed ‘DPR’ puts a mark on giving out weapons. It turned out the detained was on the wanted list,” said Col. Lysenko.

Ukraine’s Security Service blocked illegal activity of an editor of anti-Ukrainian group in Russian social media in Luhansk region. “Announcements on recruiting mercenaries to the ranks of the self-proclaimed ‘Luhansk People’s Republic’ (LPR) and collecting financial aid for militants were published on the page of the Internet community which existed since late May 2015. Contents discrediting Ukrainian Armed Forces and law enforcement agencies, Ukrainian language and state symbols were published too,” said the spokesperson.

Ukrainian law enforcements stopped a car on a checkpoint in Pershotravnevyi district near Mariupol. A ball grenade, TNT block and over 100 cartridges to the AK rifle were seized from the driver