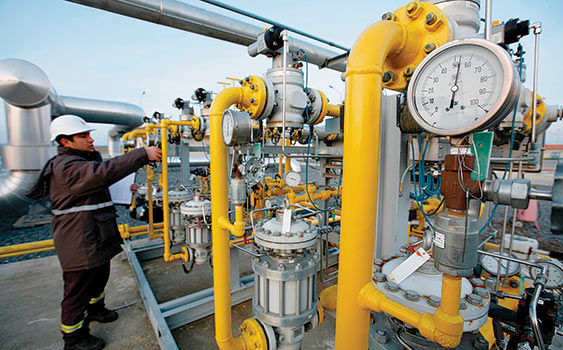 Kyiv, May 21, 2014. Ukraine increased daily imports of natural gas from Hungary by over 100 times, as reported Hungarian gas transmission system operator FGSZ Ltd. Earlier, the average daily deliveries of gas amounted to 22.5 thousand cubic meters, today, however, Hungarian operator received application from Ukraine for the supply of 2.46 million cubic meters of gas. At the same time, this volume is far from reaching the maximum technical capability of importing 16 million cubic meters of natural gas per day, reads economics.unian.net.
On May 14, 2014 Ukrainian state-owned company Naftogaz signed a contract with a large European company, which will dramatically increase the volumes of natural gas imports from Hungary starting May 21, 2014. The head of Naftogaz, Andriy Kobolev, however, refused to name the company, as reported by UNIAN.
Notably, in order to achieve energy independence amidst the escalation of conflict with Russia, Ukraine has been developing reverse gas supply routes from Hungary, Poland, Slovakia and Romania. Remarkably, on April 28, 2014 Ukraine and Slovakia reached an agreement on the reverse gas supply, as announced by the Minister of Economy of Slovakia Tomas Malatinsky.
The gas will be supplied to Ukraine though the Voyany-Uzhgorod pipeline. Slovak gas transporting company Eustream reported earlier that reverse gas supplies through this route could commence in October, 2014 and reach three billion cubic meters per year. Starting March 2015, this figure could reach 10 billion cubic meters annually, reads economics.lb.ua.
Ukrainian officials reported that the Slovak corridor for reverse natural gas supplies was the most promising for Ukraine, however, it was previously blocked by Russia’s Gazprom, reported rbc.ua.
Notably, in February 2014, the Visegrad Four (V4 Group: Czech Republic, Hungary, Poland and Slovakia) expressed readiness to resume the project which involved the reverse supply of natural gas from Europe to Ukraine. Such was a joint statement issued by the Ministers of Foreign Affairs of the V4 Group during their meeting in Budapest, as reported by ITAR-TASS. Moreover, in 2013 Ukraine negotiated cheaper reverse gas supplies through Poland and is still working on reaching respective agreements with Romania.
In addition to its Eastern European neighbors, in May 2012, Ukraine signed a framework agreement with German electric utilities company RWE regarding the supply of gas to the Eastern European country. The company agreed to sell Ukraine up to five billion cubic meters of gas annually. By the end of 2012, RWE has sold Ukraine 56 million cubic meters of gas.