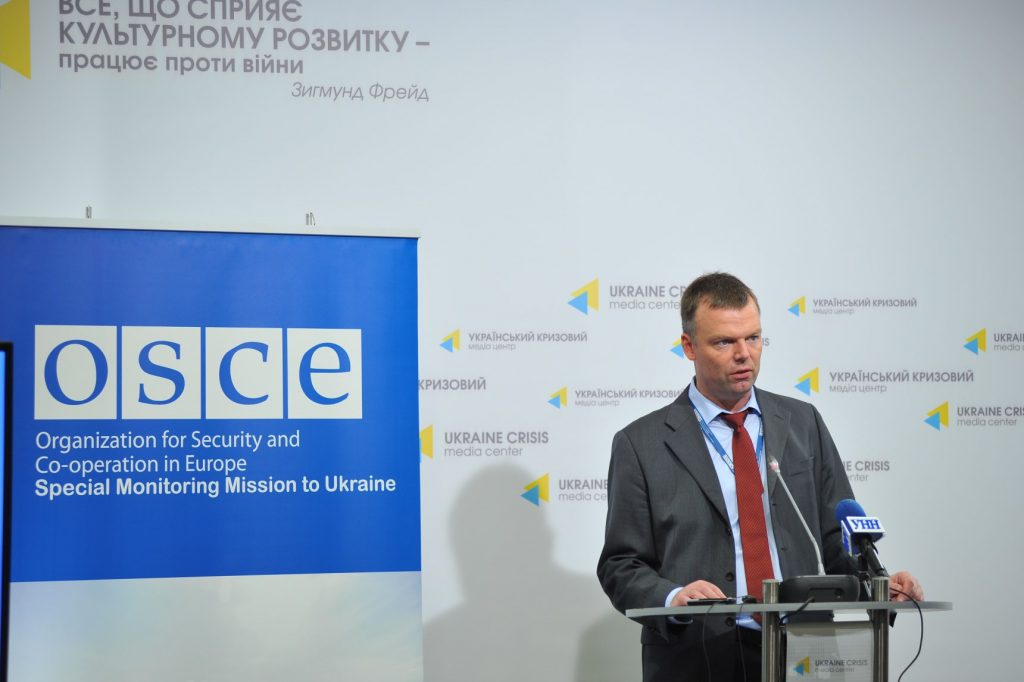 Kyiv, November 5, 2015. All tanks and smaller caliber weapons should be removed from the 30km security zone along the contact line in a matter of days. The OSCE Special Monitoring Mission (SMM) continues to observe the presence of weaponry in designated permanent sites and check the weapons’ serial numbers. However, several discrepancies were detected. “We urge all sides to use the last remaining days to fully comply with the addendum”, stated Alexander Hug, Deputy Chief Monitor of the OSCE Special Monitoring Mission in Ukraine during a press briefing at Ukraine crisis media center.

According to Mr Hug, since Sunday, the SMM observes a significant increase in violence in the area of Donetsk airport. Monitors recorded 114 explosions on Sunday alone. The SMM also reports the presence of camouflaged multiple launch rocket systems in Luhansk region in the area of Chabanivka and at least one “Grad” rocket was used in Staromykhailivka.

Mr Hug noted the large numbers of people crossing the Stanytsa Luhanska bridge following its opening last Friday. “The simple fact of people crossing a bridge in the place where friends and family have been cut off for months, where people have been unable to access medical treatment, where normal commercial activities have been severely hampered, where people have been unable to receive their pensions – this opening is of major significance,” he explained. Positive developments according to Mr Hug, can also been seen in repair works taking place around Luhansk city.

The Deputy Chief Monitor stressed that this week the danger of landmines and unexploded ordinance (UXOs) was particularly evident due to explosions at an ammunition depot in Svatove. The SMM notes large amounts of UXOs in the fields around the depot. “Thankfully the government’s response was swift. We have noted extensive demining activity in the area,” he noted. However, the OSCE monitors report a large number UXOs in the security zone that should have been removed under the Minsk memorandum.

The SMM is ready to open two additional forward patrol bases in the area controlled by the so-called “Donetsk People’s Republic” (“DPR”). They will complement already operating OSCE bases in Novoaidar, Stakhanov and Volnovakha. However, according to Mr Hug, the “DPR” has not yet provided the SMM with security guaranties.

Alexander Hug followed up noting that, “the sides cannot expect balanced monitoring and reporting while at the same time restricting our freedom of movement or hindering the establishment of additional bases”.