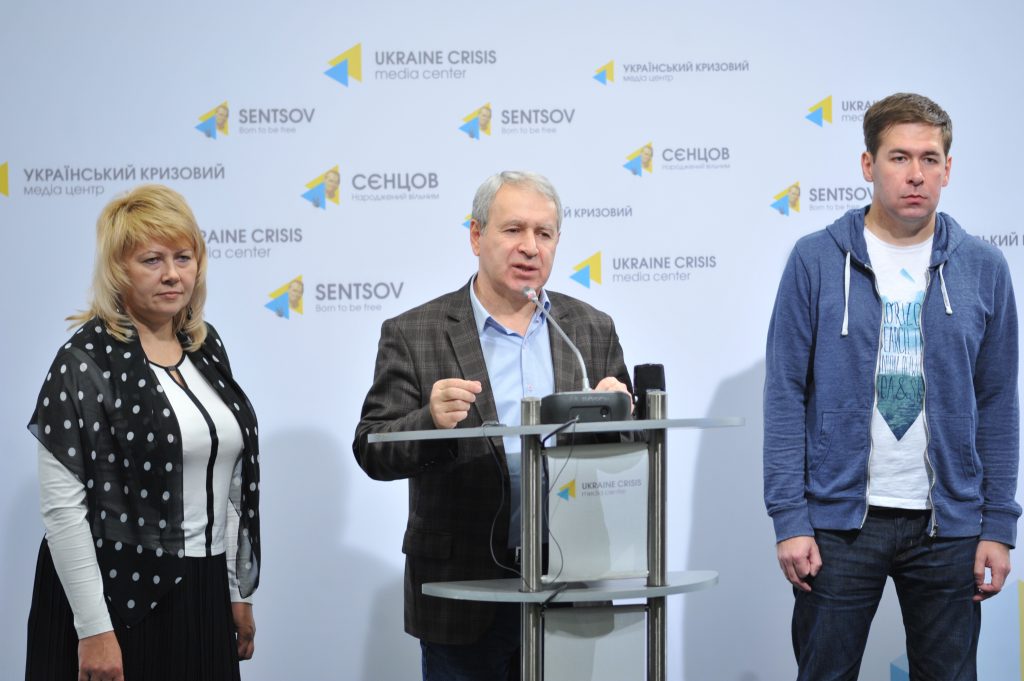 Kyiv, November 7, 2015. The case against Stanislav Klykh and Mykola Karpiuk in Chechnya (who are suspected of involvement in the Chechen war) can end in acquittal, if the Ukrainian government helps to gather information confirming their alibi in a month time, and submits it to the defence and investigators. This was stated by the lawyers of the defendants at a press briefing at Ukraine Crisis Media Center.

Dokka Itslayev, Mykola Karpiuk’s lawyer, noted that this case differs much from other politically motivated trials involving Ukrainian citizens in Russia, because the fates of Stanislav Klykh and Mykola Karpiuk will be decided by the jury. “Our main task is to try to gather evidence that neither Mykola Karpiuk, nor Stanislav Klykh has committed crimes they are charged with. Therefore, we would like to inform the Ukrainian audience and especially the Ukrainian authorities that without their help which the defense can do little in Grozny,” pointed out Dokka Itslayev. The lawyers emphasized that a lot of people in Ukraine who lived, worked and studied with Mykola and Stanislav or saw them at various events, can confirm that they did not fight in Chechnya in those years. In particular, people whom they unwillingly called combatants in Chechnya can help them a lot. “I hope that Arseniy Petrovych and other persons, against whom Mykola and Stanislav were intimidated into testifying, will help us to obtain circumstantial evidences that justify them, because the process involving jurors is designed so that a lot depends on circumstantial evidences,” said Ilya Novikov. “If Arseniy Petrovych agrees to inform in detail where he was then, it will be a major help. Moreover, those who actually fought in Chechnya (for example, Ihor Mazur) can become very helpful witnesses confirming that they saw neither Stanislav, nor Mykola there,” he added.

“Currently, we feel that the authorities from Ukraine don’t work efficiently enough,” stressed Dokka Itslayev. He said that at the very first meeting with Mykola they have identified a list of individuals who could confirm his alibi. Then human rights defenders and his wife helped to find even addresses and phone numbers of the witnesses. “We have sent the list to the Ukrainian authorities to ensure that people be interrogated as a part of the request from Russia, within the murder case opened in the Dniprovskiy District Department of Internal Affairs Ministry in Kyiv […] in connection with the disappearance of Karpiuk in Russia,” informed the lawyer. “Rather than interrogate witnesses who could give specific and valuable evidence, the case was closed quickly.”Besides,” said Mr. Itslayev, “after opening a case against Karpiuk and Klykh in Russia, an investigator sent a request to Ukraine, where, among other things, he asked to provide evidence of their participation in the Chechnya war in 1994 -1995. “This means that the Ukrainian government has an opportunity to refute the charges against our defendants, as the corresponding procedure is provided for by the Criminal Code of the Russian Federation,” said Dokka Itslayev. “The request was sent in June 2015. But it still remains unanswered”. According to the lawyer, it seems that Ukrainian officials “are waiting for the verdict [on Karpiuk and Klykh] instead of resolving specific problems relating to the release of their citizens”.

Ilya Novikov noted that now there is a certain progress in this case. Particularly, Deputy Prosecutor General of Ukraine Vitaly Kasko, in charge of correspondence with the Prosecutor General of Russia on these requests, has promised that “all materials that we, the defense, have to send to Russia as part of the response to the request will be sent,” informed Ilya Novikov. “We know from our experience in Savchenko’s case that this procedure is the only real chance to ensure that the Ukrainian materials reach the court and be accepted by it, since the court often does not accept the papers submitted by lawyers themselves.” In addition,” said Ilya Novikov, “the Ukraine’s Ministry of Interior promised the lawyers to institute criminal proceedings on charges of kidnapping and torturing Karpiuk and Klykh. Novikov noted that while this case will have a rather instrumental nature, and will not soon result in bringing the perpetrators to justice. Nevertheless, it enables the evidence and materials to be gathered. Besides, the lawyer added, the Security Service of Ukraine is conducting its own investigation and has interviewed several people within its competence. “We hope that by the end of this trial we will be able to collect at least some materials, not to go to the jury empty-handed,” said Ilya Novikov. It is difficult to predict how much time the lawyers have, because it is not clear how long the selection of jury members will last.

According to the lawyers, despite the cautious optimism, the situation now is quite complicated. Maryna Dubrovina, Stanislav Klykh’s lawyer, stressed that the records of defendants’ testimony given as a result of torturing were read to the court earlier. “We raised a motion to exclude these records as those which have been obtained using tortures. Stanislav showed traces left on his body. Furthermore, there is a medical evidence to prove that he really has scars and marks of electric shocks. However, the court refused to exclude this evidence […],” informed the lawyer. Maryna Dubrovina added that yesterday the defense filed a request for medical examination to establish the origin of these injuries on the bodies of the defendants. However, there is little hope that the court will agree to it, as all the previous defense motions were rejected.

Maryna Dubrovina has passed the requests and appeals of Mykola and Stanislav to all whom they slandered in their forced confessions. They ask forgiveness. “It was impossible to act differently. If Mykola or Stanislav had not said what the investigation wanted to hear, they would have tortured them further, increasing the electric current,” informed the lawyer.

Lawyers said that despite hopes for the best, they are collecting all the documents required for a claim to the ECHR, in case the jury will convict Klykh and Karpiuk. The main reason for the claim may be that Mykola and Stanislav were subjected to the tortures, their right to protection under preliminary investigation and their right not to incriminate themselves was violated. “The very fact that the court agreed to disclose testimony obtained under the torture when people were deprived of protection indicates that the European Court of Human Rights will recognize this indictment unfair,” said Dokka Itslayev.