Kyiv, November 9, 2015. Situation in the ATO zone stands tense. Militant provocations were registered along the entire contact line. Shchastia was the only hotspot in Luhansk sector yesterday. Militants fired twice upon the positions of ATO forces using grenade launchers and machine guns. “In the Donetsk sector the enemy took a risk and stormed Ukrainian positions in Mayorsk for the first time in two months. A group of Russia-backed militants started from Zaitseve and attacked our stronghold. Ukrainian Armed Forces engaged in a combat and returned fire. The exchange of fire lasted for about an hour, afterwards the occupants stepped back with losses,” said Colonel Andriy Lysenko spokesman of Administration of the President of Ukraine on ATO-related issues at a press briefing at Ukraine Crisis Media Center. Additionally, two short-lasting mortar attacks by militant groups were registered in Mayorsk and Zaitseve yesterday. “Occupants also instigated about 10 provocations on the north-eastern outskirts of Horlivka and near Luhanske located close to the contact line near Svitlodarsk using small arms and grenade launchers,” added ATO spokesman.

It was turbulent on the frontline between Horlivka and Yasynuvata as militants fired upon Ukrainian positions in Novhorodske, Troyitske and Verkhnyotoretske. Militant groups were also active near the Donetsk airport – in Avdiivka, Opytne, Pisky and Krasnohorivka. “In addition to small arms and grenade launchers, the adversary fired at least twice from an infantry fighting vehicle BMP-2. It happened in Pisky,” elaborated Colonel Lysenko.

In the Mariupol sector militants were firing from small arms in Shyrokyne for 30 minutes to provoke return fire. Militant snipers were firing in the area. “Ukrainian troops incurred no casualties over the last day, one serviceman was wounded in action in Mayorsk,” noted the ATO spokesman.

A Ukrainian armoured vehicle flipped over near Kurakhove Donetsk region yesterday in the morning. As a result one serviceman of the State Border Guard Service was killed and five were wounded. A tractor was blown up by a landmine while conducting agricultural works in Volnovakha district. “The incident occurred near Mykolayivka, a village located near the contact line close to the occupied territory. Two people were wounded as a result of the explosion and were taken to hospital,” said Colonel Lysenko. 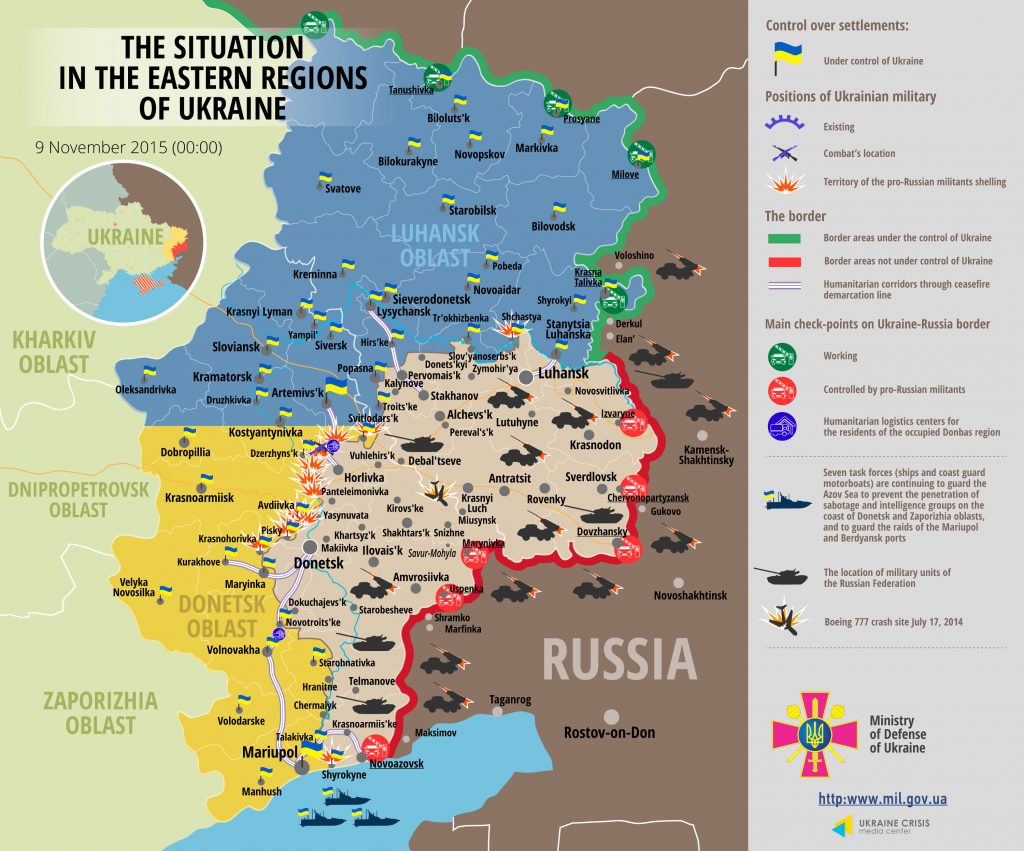 Law enforcement staff seized 24 cumulative ammunition pieces for a hand-held grenade launcher in Maryinka Donetsk region. An F-1 combat grenade was seized at the Mariupol bus station. “The grenade was discovered in a public toilet by the trash bin, the fuze was placed nearby. Timely detection of the ammunition piece helped avoid possible injuries,” noted Colonel Lysenko.