Kyiv, November 17, 2015. The situation remained calm in Svitlodar area in the ATO zone yesterday. Nevertherless, militants attacked ATO forces by fire many times in the vicinity of Horlivka – Zaitseve, Maiorsk and Novhorodske in the past 24 hours. Apart from small arms and grenade launchers, one episode on militants’ use of 82mm mortar launchers was recorded. Pro-Russian militants were shooting from close distance in Zaitseve for 2.5 hours. “Militants attacked our positions by fire in Verkhniotoretske and Troitske, shooting from the neighboring Krasnyi Partyzan which is a stronghold for militants acting in this area,” said Colonel Oleksandr Motuzyanyk, spokeperson of the Presidential Administration of Ukraine on ATO-related issues, at a briefing at Ukraine Crisis Media Center. The situation in the western outskirts of Donetsk is the most difficult. Fire from militants’ Grad multiple rocket launcher systems (MRLS) was observed in Staromykhailivka on the line of demarcation, adjacent to Petrovskyi district in Donetsk. “Nine missiles were fired upon Krasnohorivka and nine upon Hirnyk located 14 km from the frontline,” elaborated the spokesperson. In general, militants are shooting at Ukrainian positions along the entire frontline from Avdiivka to Mariinka. Moreover, militants’ 82mm mortar launcher and infantry combat vehicle were used in Krasnohorivka. 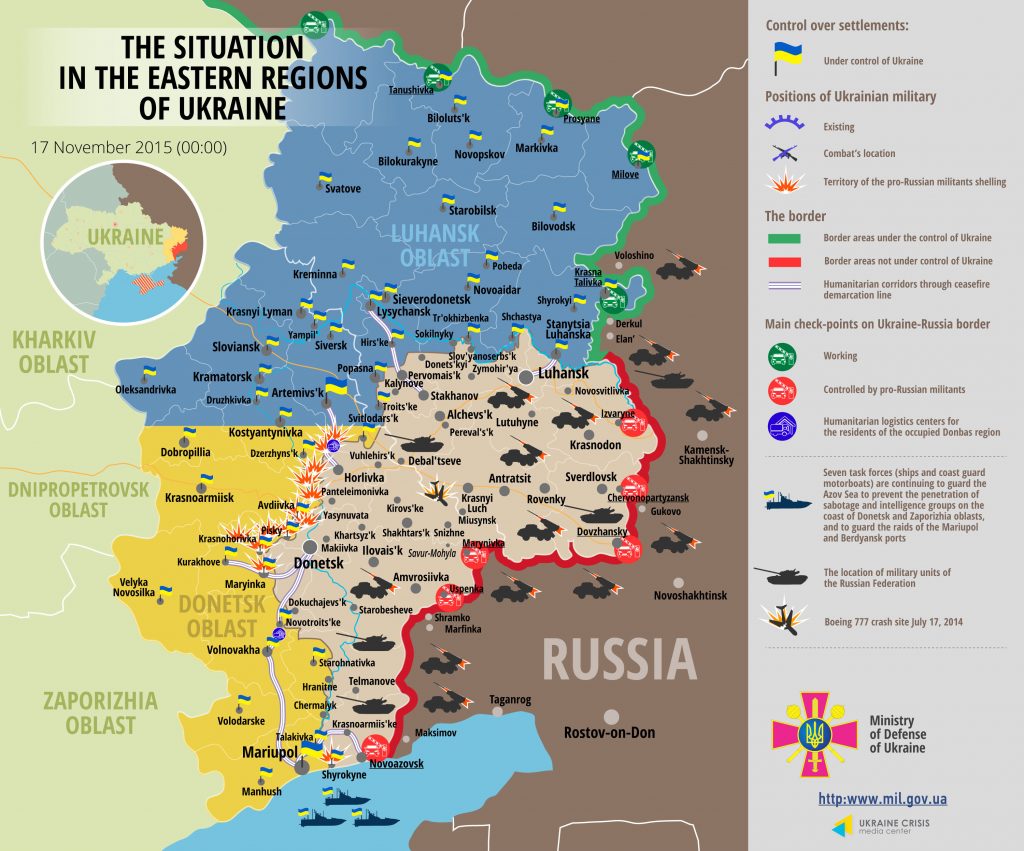 Combat activity in the Mariupol sector took place only at night time. Three cases of mortar fire and several provocations involving use of light arms were recorded. Militants were shooting from the outskirts of inhabited localities near the Azov Sea coastline,” said Col. Motuzyanyk.

The situation remained calm in the Luhansk sector; militants did not violate the armistice. Ukrainian Armed Forces incurred no losses in combat yesterday, but three troops were wounded. Ukraine’s Security Services detained a militants’ agent in Druzhkivka, Donetsk region. The man was taking picture of a strategic bridge. The detained is a Kramatorsk resident, who travelled to Russia and to the temporarily uncontrolled territory in Donetsk region in 2014-2015 and was recruited there. “During the search law enforcement officers found a detailed map of Druzkivka containing marked locations of ATO troops, float bridges and objects of vital infrastructure. Moreover, pictures of important state objects in different cities of Ukraine, including the capital, were found on digital media storage of the suspect’s camera,” said Col. Motuzyanyk.

Law enforcement and police found a RPG-22 grenade launcher, nine hand grenades and 26 items of ordnance for grenade launcher in a wood line near Katerynivka in Donetsk region. “Moreover, an anti-tank mine, 120mm mine, anti-personnel mine, two hand grenades and TNT blocks were seized from a cache in an abandoned building in Verkhniotoretske, Yasynyvata district,” said the spokesperson.