Kyiv, November 19, 2015. In Mariupol sector, militants fired 11 mines at an object near Novotroitske entry-exit checkpoint on Mariupol – Donetsk road on November 18. As a result, Ukrainian border guards temporarily suspended the passage of persons and vehicles. “According to Head of Donetsk civil-military administration Pavlo Zhebrivskiy, if enemy attacks on checkpoints do not cease, the administration will have to close them,” informed the spokesperson of the Presidential Administration on ATO related issues Colonel Oleksandr Motuzyanyk at a briefing at Ukraine Crisis Media Center. Militants’ provocations were also recorded near Hranitne and Shyrokyne. In both cases, militants used small arms. 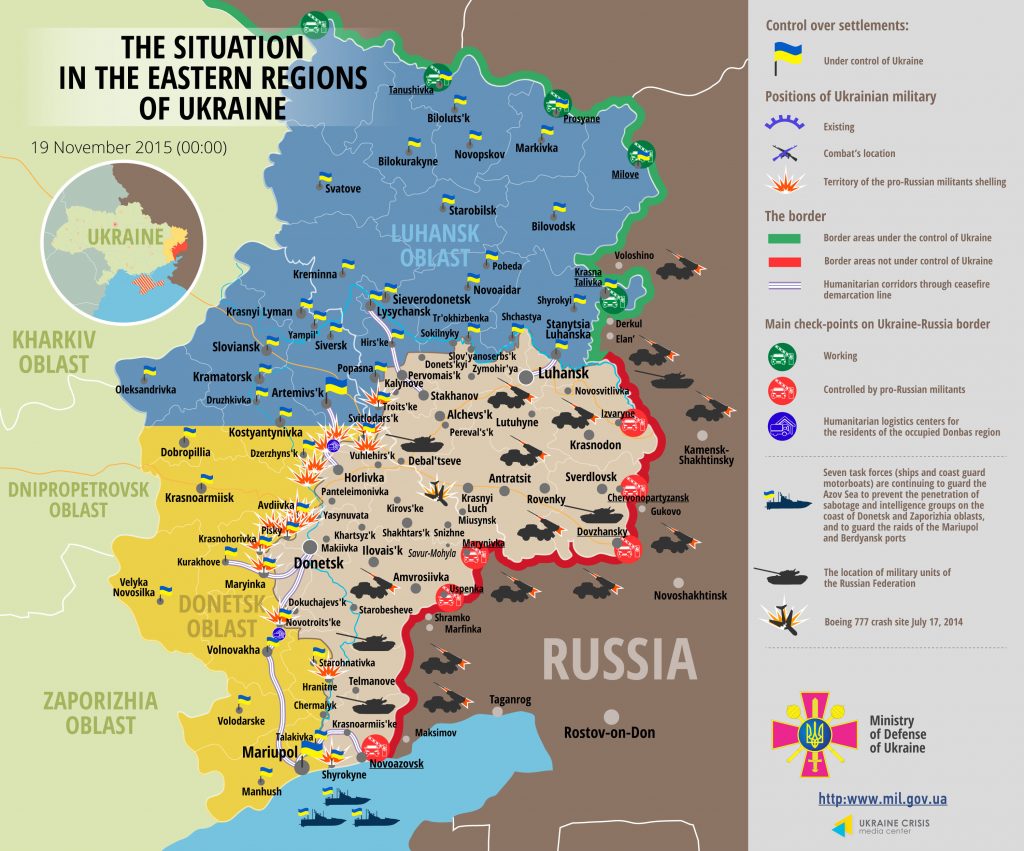 In Luhansk sector, militants violated ceasefire only on the border of Luhansk and Donetsk regions, near Troitske. “The militants fired about 10 minutes from a machine gun, and later fired four mines from a 82-mm mortar,” said Col. Motuzyanyk.

In Donetsk sector, militants renewed provocations against the ATO forces near Svitlodarsk. Yesterday, militants several times opened fire from small arms near Lozove and Luhanske. The situation is similar in the vicinity of Horlivka – in Zaitseve, Mayorsk, Novhorodske, but the intensity of the enemy fire is slightly higher. “We also recorded a mortar attack on our positions in Mayorsk,” said Motuzyanyk.

In Horlivka- Yasynuvata sector, militants violated ceasefire only near currently occupied Krasniy Partisan, firing at the ATO forefront positions. The most difficult situation is observed on the western outskirts of Donetsk. “In Avdiivka-Maryinka sector hostile provocations continued over the whole day yesterday. Militants fired from small arms and grenade launchers, but did not apply heavy weapons,” said Motuzyanyk. Over the last day, Ukrainian military did not incur any lethal casualties, one was wounded.

In Luhansk region, there was an accident on Severodonetsk – Novoaydar road involving two trucks, a civilian and a military one, which transported Ukrainian militaries. “As a result of the collision, two people died – a civil car passenger and a female soldier. Also one civilian and seven soldiers were wounded,” said Col. Motuzyanyk.

Yesterday a local inhabitant tripped a mine in Maryinka. The man slightly injured his leg.

The Security Service of Ukraine published another proof of Russia providing militants with arms and ammunition. “Near Maryinka operatives withdrew two TBG-7V thermobaric grenades, which are used only in the Armed Forces of the Russian Federation. They also confiscated about 100 different types of ammunition for grenade launchers, two anti-tank and one personnel mines and a large amount of different caliber ammunition,” said Motuzyanyk. The house, where they found weapons, is in close proximity to the contact line, so withdrawal was conducted with assistance of engineers.

In addition, according to Motuzyanyk, three trucks with humanitarian aid from the International Committee of the Red Cross arrived through Novotroitske checkpoint yesterday. They transported nearly 16 tons of cargo for the residents of Donetsk region.