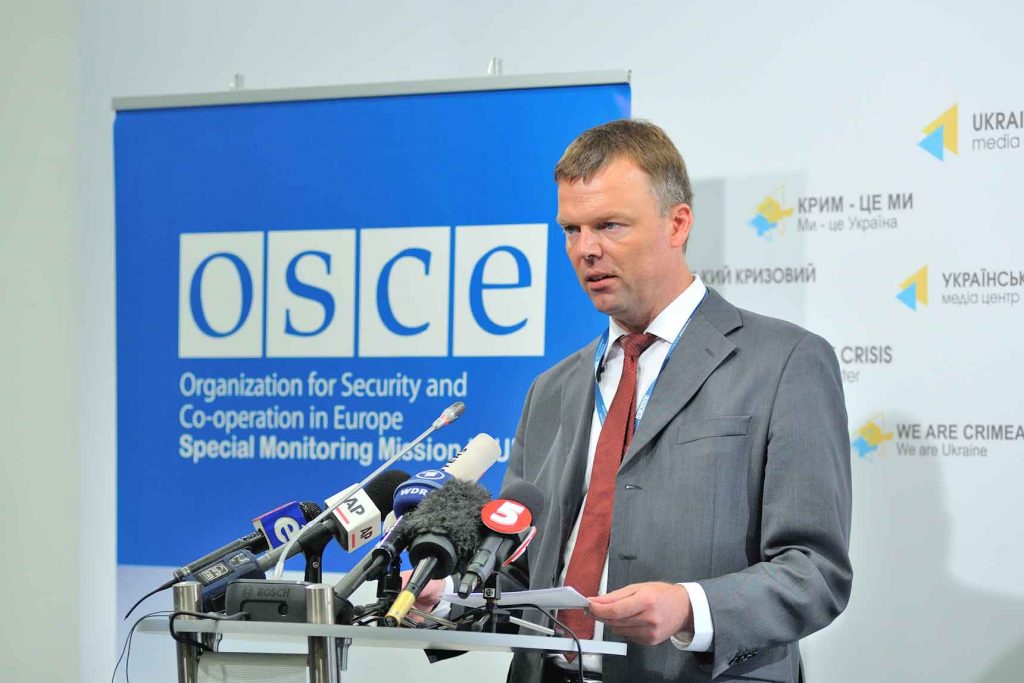 Kyiv, November 19, 2015. The OSCE Special Monitoring Mission (SMM) continues to note ceasefire violations in a number of locations, most notably in areas north-west and west of Donetsk city. On Sunday, the SMM observed a marked increase in the number of ceasefire violations in areas around Donetsk airport, noting 250 instances. “We also noted a spike yesterday. In the space of just 19 minutes, our monitors positioned at Donetsk railway station, recorded 107 explosions. The ceasefire is very shaky at the edges,” stated Alexander Hug, Deputy Chief Monitor of the OSCE Special Monitoring Mission in Ukraine.

According to him, these numbers clearly show that not all weapons have been withdrawn from what is supposed to be the security zone. The sides must also ensure that heavy weapons are withdrawn to designated secure sites that meet specific criteria. “Despite being told what those criteria are by the SMM on 16 October, the sides have failed to meet them. Since the new regime came into effect on November 9, the SMM has not verified the withdrawal of a single heavy weapon from the security zone,” elaborated Hug. He also called upon the sides to provide the SMM with weapons’ inventories if “the sides really want to have the withdrawal of weapons verified”.

The Deputy Chief Monitor added that the in the past two weeks – in addition to 13 occasions when the SMM freedom of movement was restricted by all sides – the Mission was denied entry to the so-called “Donetsk People Republic” (“DPR”) heavy weapons storage site. In its turn, the so-called “Luhansk People Republic” (“LPR”) are now demanding the removal of two of the monitors from areas they control.

“The situation regarding the verification of smaller calibre weapons has been somewhat better,” continued Hug. As outlined in the addendum to the package of measures, these weapons are tanks, mortars up to and including 120mm, and artillery up to 100mm. “This week, both sides announced the completion of the final stage of the withdrawal of these weapons. I wish to point out that this is welcome but not the end of the process. Verification of that withdrawal is an ongoing, open-ended process,” explained Alexander Hug. According to him, this process has so far not been entirely smooth. Previously-recorded weapons or those declared in the inventories are sometimes found to be missing. More concretely, we have also seen evidence of the use of such weapons. “The SMM inspected craters near Zaitseve, just north-east of Horlivka. They were caused by 120mm mortars. The craters were very close to a local school, and within a hundred metres of the school, there was a checkpoint controlled by armed so-called “DPR” members”, he added. Unexploded ordinances (UXOs) remain the major risk for civilians as explosive remnants of war and UXOs are littered all across the contact line. The sides thankfully are working to address the problem. Explosive ordnance disposal teams from both sides of the contact line removed or destroyed such weapons from a 3.5 km stretch of road crossing the contact line just east of Shyrokyne. De-mining operations have taken place elsewhere. This particular case is encouraging.