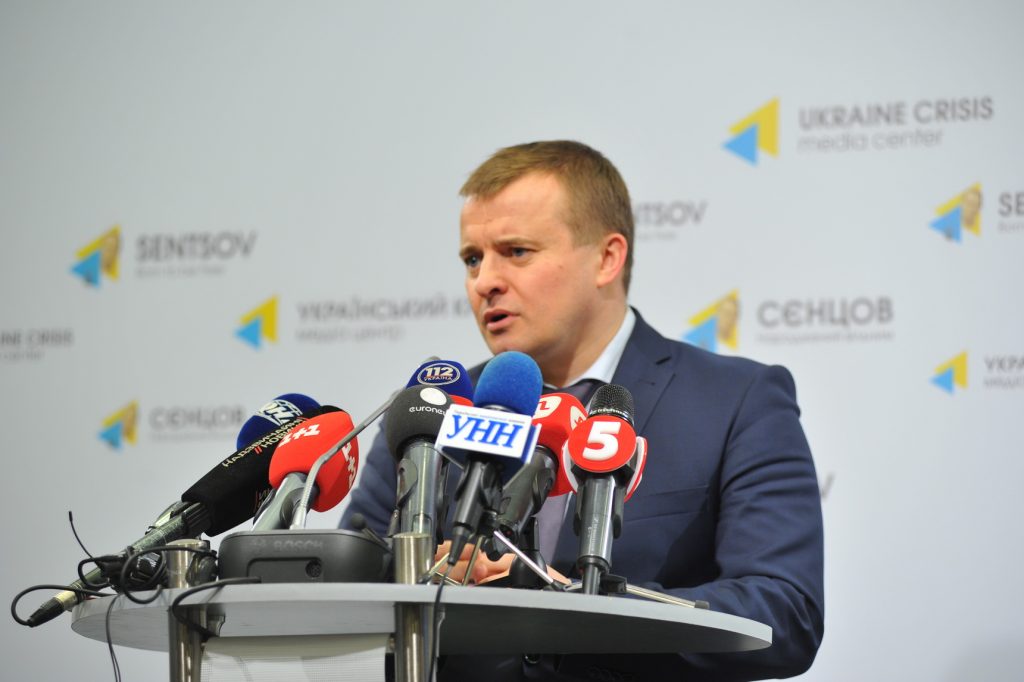 Kyiv, November 23, 2015. Consumption of gas, heat and electricity by industrial plants and district heating companies this year is significantly lower than last year. It’s about 17-19 percent lower in gas and 13-14 percent in electricity. Gas reserves are at 16,5 bln cubic metres and there will be about 16 bln cubic metres left by December 1, whereas this time last year there were 14 bln cubic metres. «The gap between this year’s reserve and that of the last year is growing. By the start of the heating season it was 1 bln cubic metres. By December it will already be 2 bln cubic metres,” stated Minister of Energy and Coal Industry of Ukraine Volodymy Demchyshyn at a press briefing at Ukraine Crisis Media Centre. He also added that due to the lower consumption of gas in the nearest future Ukraine is not planning to buy it additionally on a pre-paid basis, however about 30 mln cubic meters of reverse gas are bought every day. With regard to the winter energy package, Mr.Demchyshyn confirmed, Ukraine had obtained “all assurances from both the European and the Russian parties that everyone regards this document as an applicable one”.

Coal resources at thermal electrical stations are 2,3 m tonnes and there are approximately 200 thousand tonnes at  thermal power plants. It is nearly 1 m tonnes more compared to last year. Moreover, in the nearest future 168 thousand tonnes of coal are expected to come from South African Republic. Yet, Volodymyr Demchyshy noted that “the question is not how much more it in total brings but rather how we can supply it”.  “We do our best to redirect electricity production to those stations that use local coal, so we will be loading the mines of local energy company DTEK and of state company Centrenergo at the maximum level,” said Volodymyr Demchyshyn. Besides, he added, the problem could be partially solved by reducing the burden on anthracite stations.

Currently, Ukraine cannot fully do without coal from Russia because no more than 370-380 thousand tonnes of coal per month can be brought through the Ukrainian ports, whereas about 900 thousand tonnes are needed. “In the future several years this should be solved, it is necessary to increase the capacity of coal import from the outside. But it is better to increase the load of Energoatom by 5 bln and reduce coal consumption by 5 mln tonnes,” said Demchyshyn. The change of balance in the energy system in favour of nuclear power, he added, is actually already happening: “In the late December we are planning to switch on the line Rivne-Kyiv, which will make it possible to load the Rivne and Khmelnytsky stations. This will allow the daily saving of 10,000 tonnes of coal”.

The Minister also noted that over the coming years the Ukrainian energy system will gradually be synchronized with the European countries. This project is a part of government’s action plan and 2020-programme. “We are actively working with Moldova and Romania on the partial synchronisation with their systems. Partly load centre “Burshtyn Island” has already been synchronized. 2.5 mln of Ukraine’s population are already living in the European energy system,” informed Demchyshyn. He also added that for the synchronization it is necessary to ensure balancing capacities and test the system. These processes will take several years.

Mr. Dymchyshyn reported that already tomorrow the bills 3073 and 3074, which are necessary for the full scale functioning of the law “On the gas market” and which provision amendments to the Tax and Customs Code, would be brought forward for the discussion at the Verkhovna Rada. The law “On the gas market,” the minister said, has already been demonstrating positive results. Due to the fact that foreign traders have entered the market, Naftogaz has lost 25% of its premium segment in the industry and gas prices on the market have decreased. “Although Naftogaz is a state company, I believe that competition makes it be faster and more active, – Mr. Demchyshyn said. – I hope we will adopt these laws as soon as possible to eliminate contradictions and reduce the risk of arguments.” He pointed out that the transfer of regional gas distribution networks to state enterprises remains the most problematic issue and perhaps it is precisely the conflict of interests around it that inhibits the transmission of the draft law to the Parliament.

The law on the electricity market is almost ready, but the fact that a large number of contributors (among them the Energy Community, the World Bank and the U.S. experts) participated in drafting it slightly delays the process. “There are some contributors who say that the transition between the present look of the energy market and new energy market should be long enough. We went through this process in gas sphere relatively quickly, that is why I am advocating the view that one needs to move as fast as possible,” stressed Volodymyr Demchyshyn. “My decision is not to determine the period as yet, and when the market begins to work, we will be able to manually regulate the stages of the transition period through the Cabinet of Ministers or through NERC (National Commission for State Regulation in Energy and Utilities – UCMC footnote)”. This law resolves the issue on the status of WEM Council: according to the bill, the Council for the wholesale electricity market will have consultative advisory functions. Therefore its influence will be significantly reduced. “On Wednesday there will be a meeting with the Energy Community and I think we will forward the documents to the Cabinet of Ministers then,” informed the Minister.

The third law on NERC is fully ready, but has not been put to a vote yet. “Given that we are building a new gas market and the new electricity market, an independent strong professional regulator is definitely needed. Therefore such regulator has to be allocated with capacities and funding so that it can be independent, take an active position, protect consumer interests and be an arbitrator on the market ,” said Volodymyr Demchyshyn. He also stressed that it was extremely important to vote the law as soon as possible.