Kyiv, November 26, 2015. Yesterday Chief of the General Staff of the Armed Forces of Ukraine give an order to respond with fire only in case of direct threat to our troops’ lives. This regime came into effect at midnight of November 25, said spokesperson of Presidential Administration of Ukraine on ATO-related issues Colonel Oleksandr Motuzyanyk at a press-briefing at Ukraine Crisis Media Center. He also said that the Ukrainian party of Joint Center of Control and Coordination (JCCC) informed about it members of the OSCE Special Monitoring Mission and the Russian party of JCCC. Colonel Motuzyanyk also reminded that ATO forces completed withdrawal of heavy armament from the contact line and the OSCE verification of this process is over. Nevertheless, the enemy did not finish this process and there is no OSCE report on concerning is. “Commanders make decisions to respond with fire on the site. Any attempts of enemy’s advance will be prevented and the militant troops destroyed,” emphasized the spokesperson. 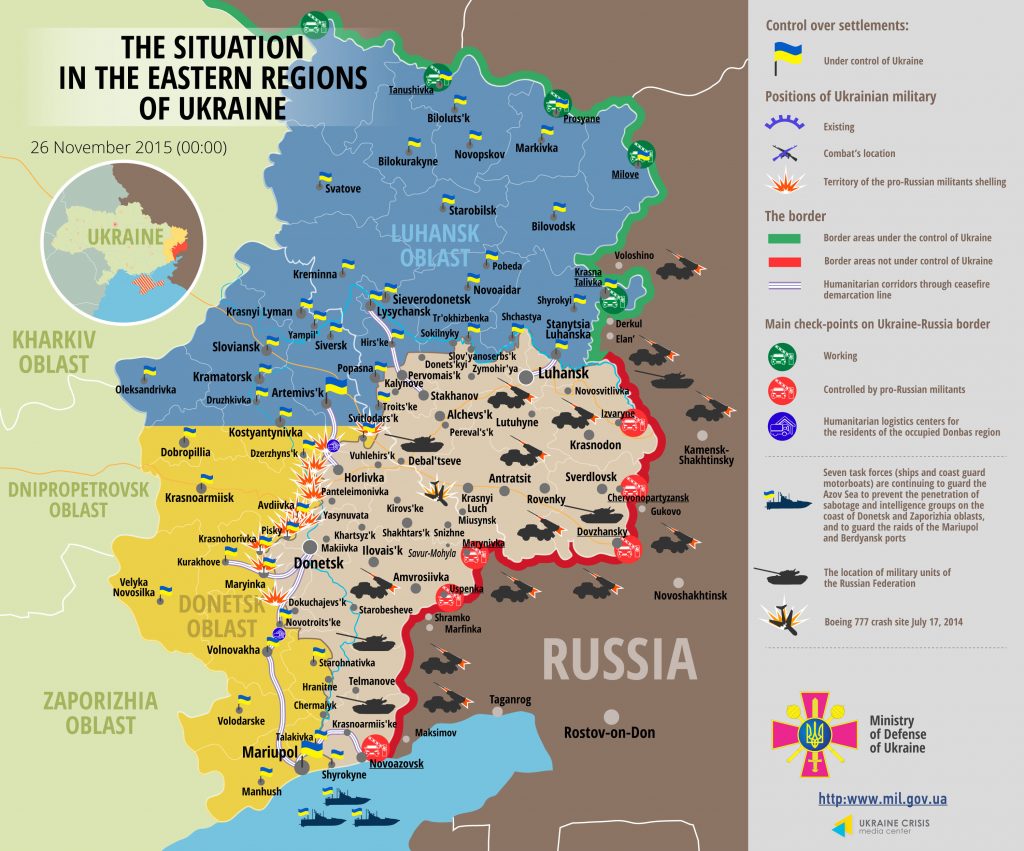 At the same time, the armistice held in Luhansk and Mariupol directions. Armed provocations were recorded in Donetsk sector near Luhanske, Verkhniotoretske and Troitske villages. “The situation is stable in the area of Avdiivka – Opytsne – Pisky – Krasnohorivka – Mariinka – Taramchuk. The biggest number of hostile provocations is recorded here. Nevertheless, Russia-backed militants did not use heavy arms,” said Col. Motuzyanyk. He added that the pro-Russian militants used Grad multiple rocket launcher systems (MRLS), firing from Spartak settlement towards Horlivka. Over 20 missiles were launched in total. “Both of the inhabited localities are controlled by the pro-Russian militant groups, and Grad MRLS were supposed to be withdrawn from the contact line,” reminded Col. Motuzyanyk.

The spokesperson informed that the Ukrainian Armed Forces incurred no losses in combat, but two troops were injured.

Col. Motuzyanyk also said that police investigators detained an informant of the self-proclaimed ‘Donetsk People’s Republic (‘DPR’) in Luhansk region. The man was transferring intelligence on location and proceeding of Ukrainian troops. Another two militants were detained in Tsukuryne and Sloviansk in Donetsk region. Two more men were captured in Sloviansk when they were taking pictures of positions and strongholds of the Armed Forces of Ukraine in the firefight area. “At the same time, Dzerzhynskyi court in Kryvyi Rih made a decision regaridng five criminals who were distributing anti-Ukrainian propaganda materials on the instruction of the self-proclaimed ‘DPR’. The court sentenced militants’ accomplices to five years and six months in prison,” added Col. Motuzyanyk.