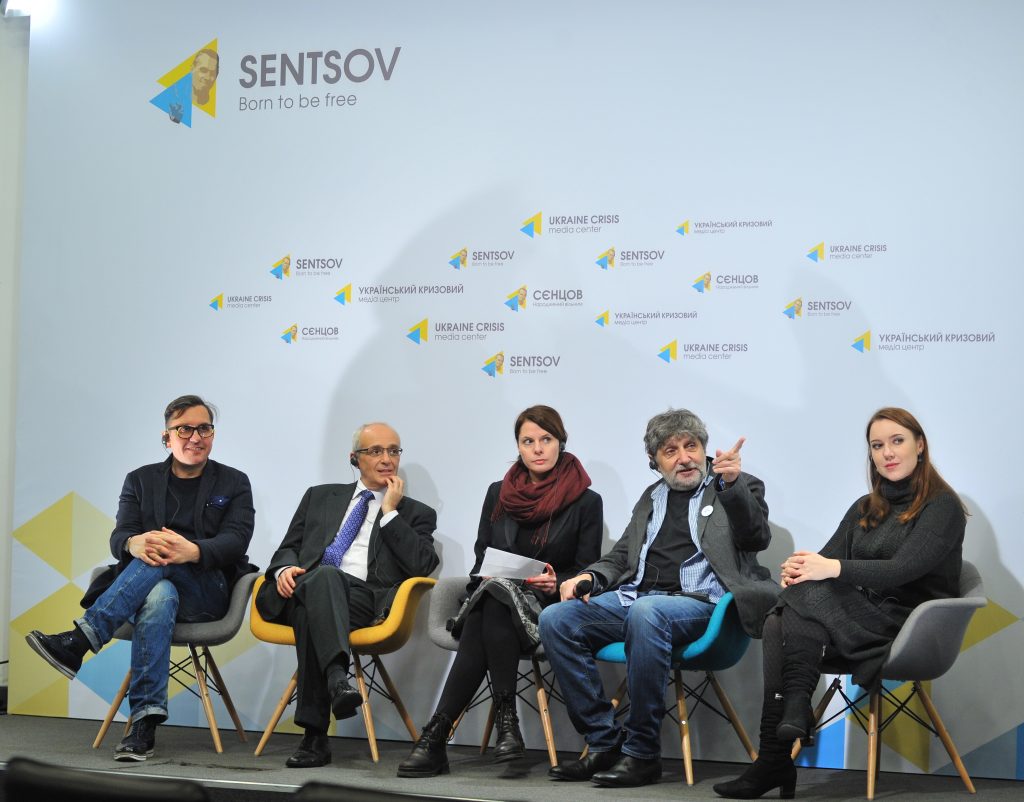 Kyiv, December 5, 2015. Czech playwright, politician and public activist Vaclav Havel had great feelings for Ukraine and its people. Today, when Ukraine is fighting for democracy, his plays became more meaningful than ever, said Michal Docekal, Director of the Czech National Drama Theatre and stage manager, during a press briefing at Ukrainian Crisis Media Center. According to him, there are a number of complex themes that are worth speaking about.“Vaclav Havel always emphasized in his letters to Ukraine that it must be free, it must have the right to decide where to move and what it should finally reach. So now is the time when we can bring Havel’s message to the people of Ukraine,” says the director, adding that the Czech intelligentsia feels very sensitive about the situation in Ukraine.

Lucie Řehoříková, Director of the Czech Centre in Kyiv, said that the Czech theatre delegation arrived in Ukraine to establish cultural ties with Ukrainian artists. They carried out a number of studies and negotiations and will stage one of his plays at the Kyiv Academic Drama and Comedy Theatre on the Left Bank on the eve of Vaclav Havel’s 80th anniversary. Five plays have been pre-selected and the director will take a final decision what to show the Ukrainian viewer in Kyiv. The whole team has arrived in Kyiv to work on this. Among them is Břetislav Rychlík, stage manager, documentary director, journalist and activist, who will spend several months in Kyiv to stage the play. Mr. Rychlík has come to Kyiv for the third time this year. He confesses that he has Ukrainian roots – his distant relatives come from Transcarpathia, Many of his friends and students are concerned about the fate of Ukraine; they even went to the east to deliver help. He is familiar with Ukrainian families affected by the war, so he knows firsthand about what is happening in our country. Rychlík said that the majority of the Czech people support Ukrainians, “liberation of Ukrainian territories and the revival of civil society.” According to him, the Ukrainian people are struggling for independence and democracy, and Vaclav Havel is known as a playwright who fought for truth and freedom. “A lot of things he said about civil society, struggle for freedom and democracy, is a topic with which we are confronted in Ukrainian reality every day,” said Rychlík. The director says that the country, which he calls his mother country, the occupied country, the people who were attacked, must endure, but we must fight for it, including with cultural methods.

The Czech Republic itself went through the process of gaining independence, so it has a clear message for Ukraine, “It is better to be free!” said Jan Burian, Director of the National Theatre in Prague, stage manage. He said that Czech theatre reflects the political position of the country and the changes that are taking place. Theatre has always been a platform for independent expression of ideas, for finding ways of how to work in the political and cultural field to unite them. It is for this purpose that the Czech theatre delegation has arrived in Ukraine. “The most important thing is not just political change, but how to rebuild a new society and this is a great job, and culture can become the right means,” says Burian.

Tamara Trumova, Stage Director at the Kyiv National Academic Theatre of Drama and Comedy on the Left Bank, is convinced that this initiative of the Czech side is very important. Therefore, Vaclav Havel’s play will be staged at the Ukrainian theatre in the best way. “A number of topics which Vaclav Havel touched upon in his work, are the topics that the Ukrainian viewer and Ukrainian theatre require,” said Trumova. She is convinced that this experience will be invaluable and will become an extraordinary event.