Kyiv, December 11, 2015. Situation in eastern Ukraine remains turbulent. “Number of ceasefire violations by militant groups stands at the level observed in late spring – early summer 2015. Snipers are active near Svitlodarsk, Horlivka and Donetsk. Adversary is occasionally using heavy weapons including mortars and artillery. In contrast to previous months many of the attacks were targeted,” said Colonel Oleksandr Motuzyanyk, spokesman of Presidential Administration on ATO-related issues at a press briefing at Ukraine Crisis Media Center. Ukrainian troops incurred no casualties over the last day, no servicemen were wounded in action. 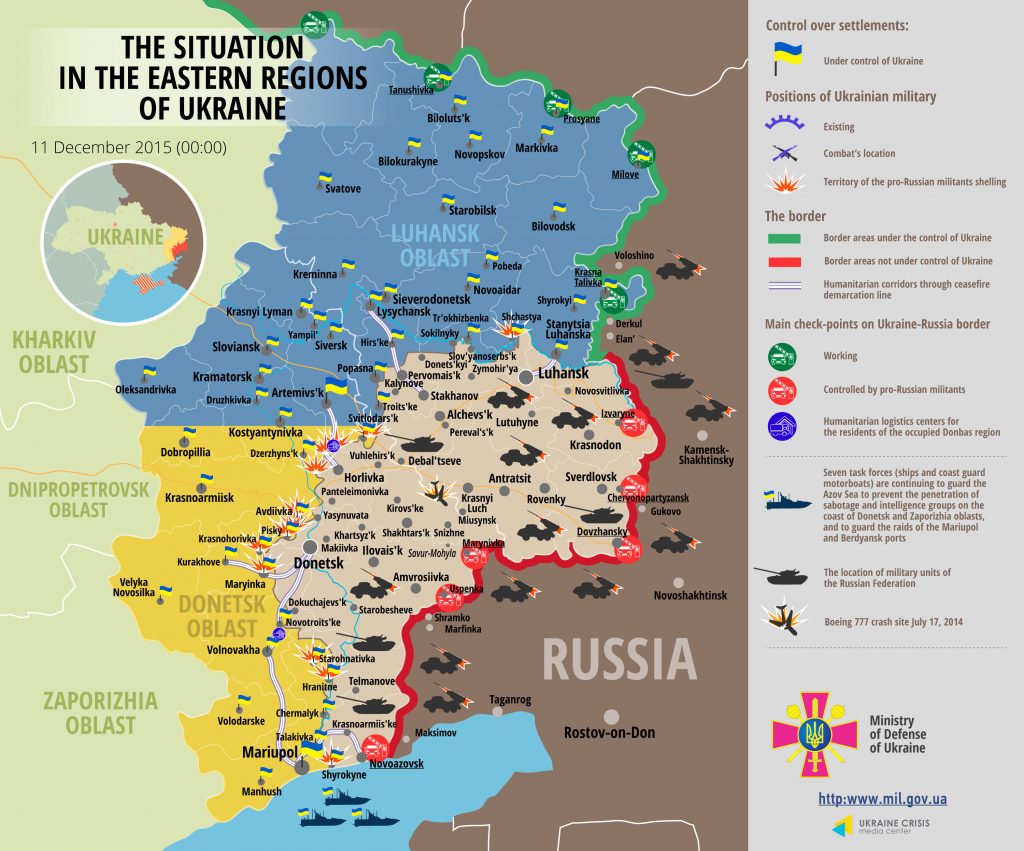 Most ceasefire violations were registered in the Donetsk sector. Militants were using small arms near Luhanske and north of Horlivka, fired five mines upon the ATO positions in Zaitseve. “Novhorodske and Pisky were shelled almost incessantly yesterday,” noted Colonel Motuzyanyk adding that militants did not use heavy weapons in these attacks. A series of minor provocations and three mortar attacks were registered in Krasnohorivka. In one of the above incidents ATO forces has to open return fire. “Adversary also violated ceasefire at other key defense points in Avdiivka, Opytne and Maryinka,” added ATO spokesman.

In the Mariupol sector militants used an infantry fighting vehicle, grenade launchers and small arms at the Starohnativka – Hranitne defense line. “Two artillery and one mortar attacks took place in Shyrokyne after midnight yesterday. Two mines and 24 shells were fired,” noted Colonel Motuzyanyk. In the Luhansk sector militants instigated just one provocation: fired from grenade launchers near Shchastia from the opposite side of the Siversky Donets river.

Ukraine’s Security Service also detained a militant informer in Novomykhailivka, Donetsk region; he used to work for the militants from July 2014. Colonel Motuzyanyk also said that district court of Odesa sentenced six militant group members to three years in prison. They planned to enlist into the militant groups of the self-proclaimed “republics”. They were arrested in May 2014.

Several caches with weapons were discovered in the area close to the frontline. A hand-held grenade launcher and an F-1 combat grenade were discovered in a private house in Novohrodivka, Donetsk region. It turned out that the owner of the house and his brother are now fighting on the militant side. “Another militant cache with weapons was discovered in Starohnativka, Donetsk region. Law enforcement staff seized an RPG-18 grenade launcher and 6,5 kg of TNT blocks from the cache,” noted Colonel Motuzyanyk.