Kyiv, December 14, 2015. Russia-backed militants refused to let pass 23 trucks with UN humanitarian aid through their checkpoints. The trucks were carrying 430 tons of food and medicine destined for residents of the territories in Luhansk and Donetsk regions that Ukraine temporarily does not control. “Militants stopped the trucks near Olenivka village, Luhansk region and sent them back without any explanation,” said Colonel Andriy Lysenko, spokesman of the Presidential Administration on ATO-related issues at a press briefing at Ukraine Crisis Media Center. 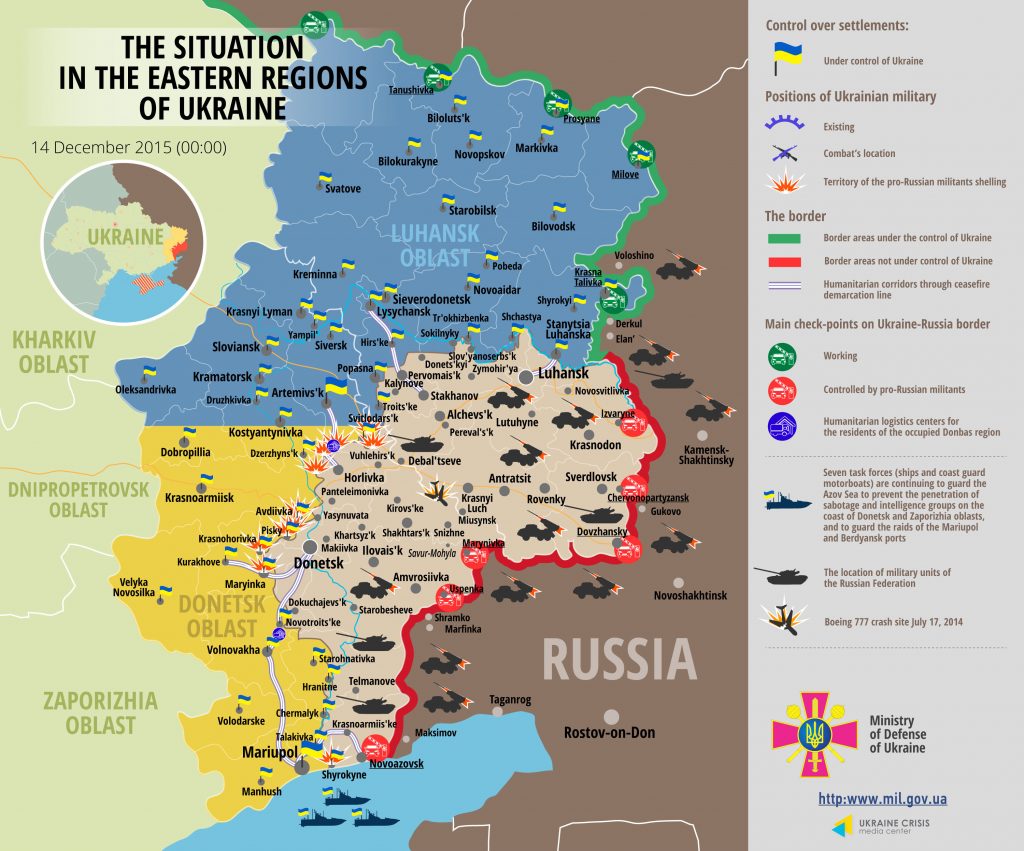 Situation in the ATO’s Donetsk sector remained tense over the last day. Ceasefire was violated on the outskirts of Horlivka – in Zaitseve, Mayorsk and Novhorodske over the last day. One attack with the use of an 82-mm mortar and militant sniper fire were also registered in this area yesterday. “Krasnohorivka was the combat epicenter on the western outskirts of Donetsk yesterday. There was a series of attacks with the use of 82-mm mortars, at least 30 mines were fired. Militant provocations were also registered along the entire contact line between Avdiivka and Maryinka,” said Colonel Lysenko. At the same time few provocations were registered at the Svitlodarsk salient. In the Mariupol sector one militant provocation was registered near Shyrokyne – a series of attacks from a grenade launcher. Calm situation was holding in the Luhansk sector over the last day. “Ukrainian troops did not incur any casualties over the last day, two servicemen were wounded in action,” said Colonel Lysenko.

Main Intelligence Directorate of Ukraine’s Defense Ministry reports that militants’ discipline and morale keep worsening. “Due to the decreasing inflow of Russian mercenaries and increasing number of militants intending to leave the militant groups occupational administration plans to hold forced military recruitment,” said Colonel Lysenko. “Low morale is explained by militant losses incurred not only in combat but also in course of internal clashes.” He also noted that conflicts between militants and local residents of the occupied territories are regular. He told about a recent incident in Horlivka. “After drinking alcohol a militant blew a grenade, as a result 56 year old female resident of Horlivka was killed, her son was wounded,” said Colonel Lysenko. The situation becomes even more complicated because of the food quality, medicine deficit and low-quality alcohol on sale that has been causing poisoning and even deaths.

Law enforcement detained three residents of Mykolayivka, Donetsk region yesterday. They were reporting on deployment places, movement routes, and the number of troops and weaponry of ATO forces to militants from June 2015. “Ukraine’s Security Service also discovered a big cache of ammunition near Severodonetsk,” said Colonel Lysenko. Over 100 F-1 and RGD-5 grenades, a box with 20 Russian-produced RGN grenades and about 11 thousand rounds of ammunition of various caliber were discovered in the cache.