Kyiv, December 16, 2015. No ceasefire violations were registered in the Luhansk and Mariupol sectors yesterday. Militants concentrated their provocations in the Donetsk sector. Thus militant groups used small arms, large-caliber machine guns and grenade launchers in the area of Pisky, Avdiivka and Opytne located near the Donetsk airport. Militants also fired twice from Minsk-banned 82-mm mortars near Opytne. Outskirts of Horlivka turned to be another hotspot including the positions of ATO forces near Novhorodske and Zaitseve as well as the area near Lozove and Luhanske close to Svitlodarsk, said spokesman of Presidential Administration ATO-related issues Colonel Oleksandr Motuzyanyk at a press briefing at Ukraine Crisis Media Center. “Over the last day militants conducted only one targeted attack upon the Ukrainian positions, rest were non-precision provocations,” he added. 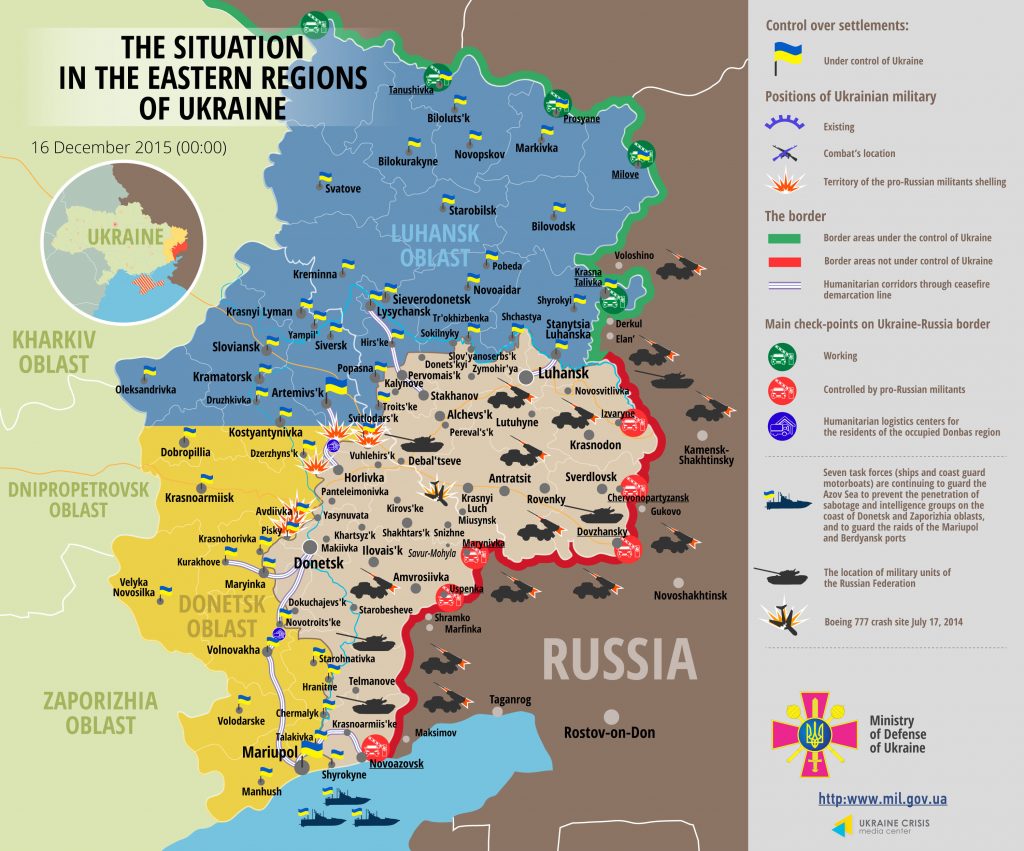 Colonel Motuzyanyk reported that one Ukrainian serviceman – reconnaissance man was killed in action over the last day. One Ukrainian serviceman was wounded as a result of a mine blast. Ukraine’s Security Service detained a female recruiter of the Russian security service (FSB) in Luhansk region. “The FSB agent was planning to recruit a Ukrainian border guard, to make him side with the so-called “Luhansk People’s Republic” (“LPR”) militant groups. Main target was to later organize a press conference where the traitor would have confessed,” said the ATO spokesman. Ukrainian reconnaissance men identified one of the commanders of the so-called 2nd motor-rifle militant brigade deployed to Luhansk. It turned to be Colonel of the Russian Federation Armed Forces Andrey Ruzynsky who was earlier on service in Gyumri, Armenia. “He was actively participating in fueling the Azerbaijani-Armenian conflict and was personally involved in the situation when an Armenian family was shot down by a serviceman of his unit,” added Colonel Motuzyanyk. Ukrainian law enforcement staff detained near Sloviansk one more person for whom the search warrant had been issued. Colonel Motuzyanyk said that law enforcement staff seized an RPG-18 grenade launcher, RGD-5 and F-1 grenades, signal flares and smoke grenades from local residents in Pyatykhatsky district, Dnipropetrovsk region. One of the perpetrators was detained, another one put on wanted list.

International military drills with participation of the U.S., Canadian and Lithuanian military continue at the Yavorivsky training ground, Lviv region. ATO spokesman said the training seeks to increase compatibility of Ukrainian troops with the units of NATO member states. Yesterday defense ministers of Ukraine, Poland, Lithuania, Latvia and Estonia visited the training ground to make sure the drills are highly effective.