Kyiv, December 23, 2015. Trilateral contact group managed to reach an agreement on establishing ceasefire starting at midnight of December 23. Nevertheless, pro-Russian militants violated the agreements. “Seven attacks at our positions in all the sectors have been recorded since the beginning of the day. For instance, militants used Grad multiple rocket launch system south of Popasna. These actions are another evidence of Russia-backed militants being unwilling to regulate the conflict peacefully. They want to prove Kremlin they are needed,” said Andriy Lysenko, spokesperson of Presidential Administration on ATO-related issues at a press briefing at Ukraine Crisis Media Center. 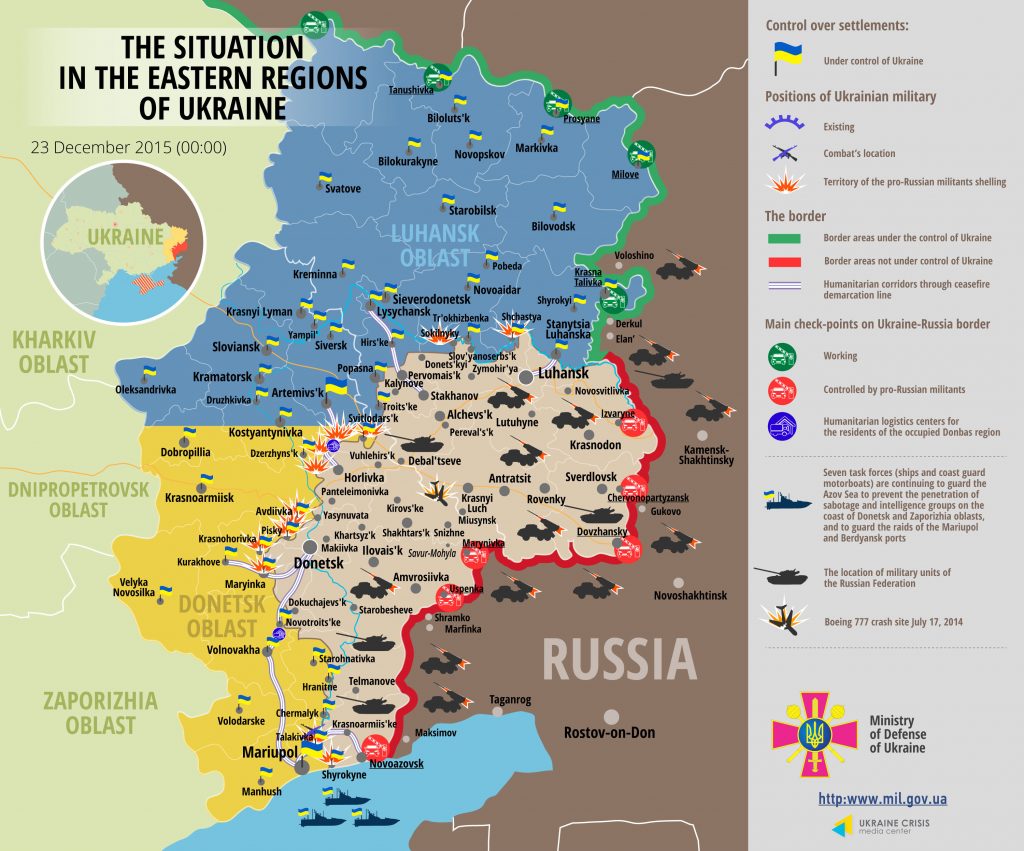 Two episodes of ceasefire violation by pro-Russian militant groups involving use of small weapons were recorded in chastia and Krymske in the Luhansk sector. “ATO forces responded with fire in Shchastia, which made militants stop shooting,” said Col. Lysenko. The majority of fire attacks in the Donetsk sector, mostly random, were recorded in Luhanske, Zaitseve, Novhorodske and Pisky. No heavy armament was used. Combat activity near Luhanske settlement, in the vicinity of Horlivka and Donetsk airport is low. Militants delivered a series of attacks with aimed fire from light arms in Krasnohorivka, and Maryinka. Moreover, several attacks from a grenade launcher were recorded. “A firefight between ATO troops and the occupants took place in Talakivka. The militants also launched one 82-mm mortar. A brief exchange of gunfire happened in Shyrokyne,” informed Col. Lysenko. Border guards observed a flight of a Russian unmanned aerial vehicle at the administrative border between mainland Ukraine and Crimea. “Moreover, a border squad observed a Russian Мі-8 helicopter proceeding along the administrative border line above the peninsula,” said Col.  Lysenko.  Ukrainian Armed Forces incurred no losses in combat, but two troops were wounded. A militants’ sniper heavily wounded a civilian from Maryinka. The wounded was instantly taken to the hospital in Kurakhove and administered medical aid.

Giving comments on a question regarding Kominternove settlement in Donetsk region, the spokesperson said that, according to the information obtained, a militants’ strengthened company task team supported by armored vehicles entered the inhabited locality. “Militants are searching houses of the local residents, establishing defensive posts and are mining the territory. Ukrainian command informed OSCE and Joint Center for Control and Coordination. Nevertheless, the OSCE monitors could not get to the settlement for safety reasons,” added the spokesperson. Kominternove is located within the ‘gray zone’.  Moreover, militants keep impeding work of the OSCE SMM monitors. “The chief of the self-proclaimed “Donetsk People’s Republic (“DPR”) 3rd motor rifle brigade” located in the occupied Horlivka banned the OSCE international staff from accessing Zaitseve under the pretense of “the territory being cleared of unexploded mines”. Militants demand that observers submit a permit from the militants’ chief, which is a direct violation of Minsk Agreements,” said the spokesperson.

According to the latest intelligence, militants continue fighting with each other. “A vehicle of the self-proclaimed ‘prosecutor’ of Yenakiieve was shot down in Shakhtarsk yesterday. A building hosting the so-called “Administration of countering organized crime” of the self-proclaimed “DPR” was blasted in Donetsk on the same day,” informed Col. Lysenko.

Law enforcement authorities detained two people, a resident of Bohorodychne village in Donetsk region and a resident of Sloviansk who used to cooperate with militants and keep watch on checkpoints. Another former militant surrendered to law enforcement, taking advantage of a Security Service program ‘You are waited for at home’.