Kyiv, December 29, 2015. Ukrainian Armed incurred no casualties in the ATO zone yesterday. One serviceman was wounded. No combat activity took place in the Luhansk sector yesterday. Nevertheless, flight of militants’ unmanned aerial vehicle at the height of 1000m was observed near Krasna Talivka village. Moreover, border guards in Luhansk region noticed a Russian airplane flying over the adjacent territory along Russian-Ukrainian border. At the same time, the situation near Svitlodar in the Donetsk sector became more stringent. Insurgents violated armistice many times near Luhanske settlement. Militant snipers are working too, said spokesperson of the Presidential Administration on ATO-related issues Colonel Oleksandr Motuzyanyk at a press briefing at Ukraine Crisis Media Center. 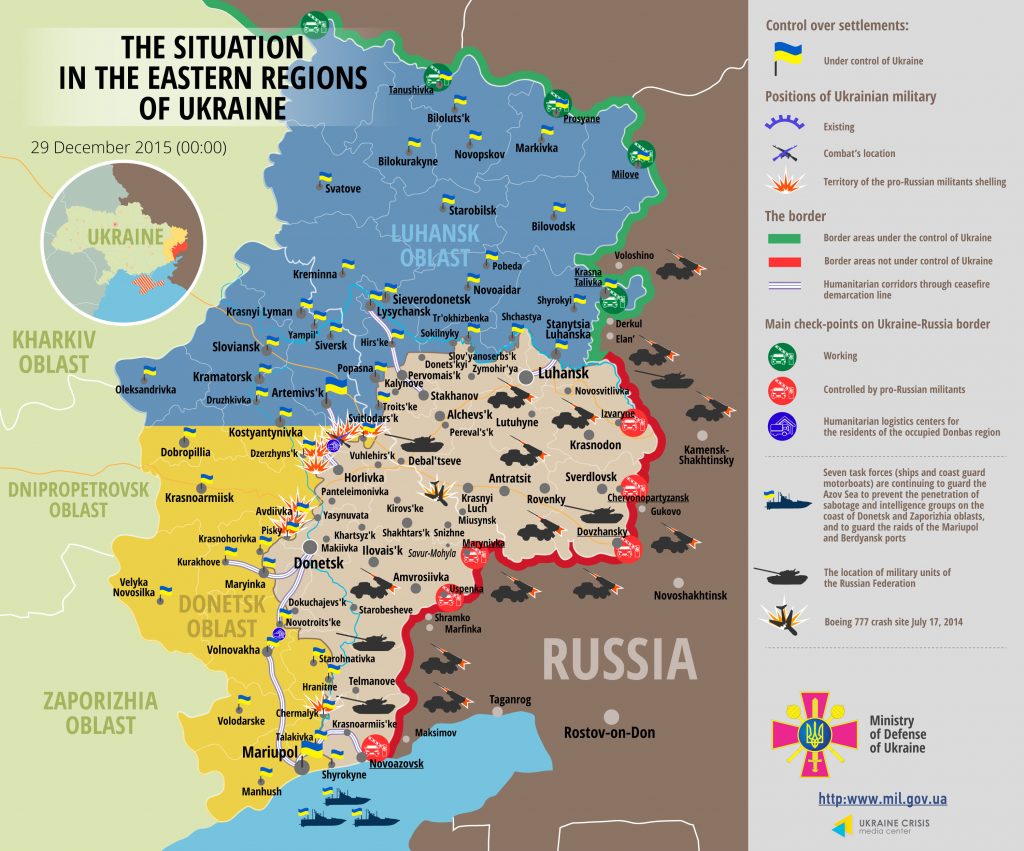 According to Col. Motuzyanyk, a firefight between ATO forces and a pro-Russian militant group consisting of up to 15 people happened between Zaitseve and Hladosove. Low intensity combat activity is taking place in the vicinity of Donetsk airport. “A brief mortar shelling took place in Pisky. Moreover, insurgents violated ceasefire south of Avdiivka and east of Opytne,” said Col. Motuzyanyk. Provocations were also observed in Mayorsk, Kodema, Shumy and Novhorodske.

Militants violated ceasefire near Chermalyk in the Mariupol sector. “Insurgents were shooting from grenade launchers, sitting on the opposite side of the Kalmius river. They attacked with aimed fire,” said the spokesperson.

Col. Motuzyanyk also spoke of a militant from a ‘Kharkiv guerillas’ subversive group who surrendered to Ukrainian special services. According to the detained, he was allured to Russian town of Belgorod and sent to a military camp where he was taught to shoot and plant explosives. “The man, a Kharkiv resident, refused to cooperate with enemy and showed the law enforcement officers a weapons cache, where a RPG-22 grenade launcher, a Kalashnikov rifle with cartridges, a magnetic mine, F-1 grenades and over 1 kg of TNT were found,” said Col. Motuzyanyk. According to the spokesperson, law enforcements detained another offender, a militants’ informant, in Donetsk region. He has been regularly informing Russia-backed militant groups on location, number and weapons of ATO troops in Sloviansk and the neighborhood.