Kyiv, January 6, 2016. The ceasefire fully held in the Luhansk and Mariupol sectors in the ATO zone yesterday. No Ukrainian troops were wounded or died in the past 24 hours, said spokesperson of Presidential Administration on ATO-related issues Andriy Lysenkoat a press briefing at Ukraine Crisis Media Center. “Russia-backed militants used large machine guns in Luhanske settlement at the Svitlodarsk bulge in the Donetsk sector. Insurgents shot from small arms and anti-tank mounted grenade launchers. Late at night they launched eight mortar shells at ATO forces positions near Mayorsk. At the same time, four hostile provocations were observed in the vicinity of Donetsk airport,” elaborated Col. Lysenko. 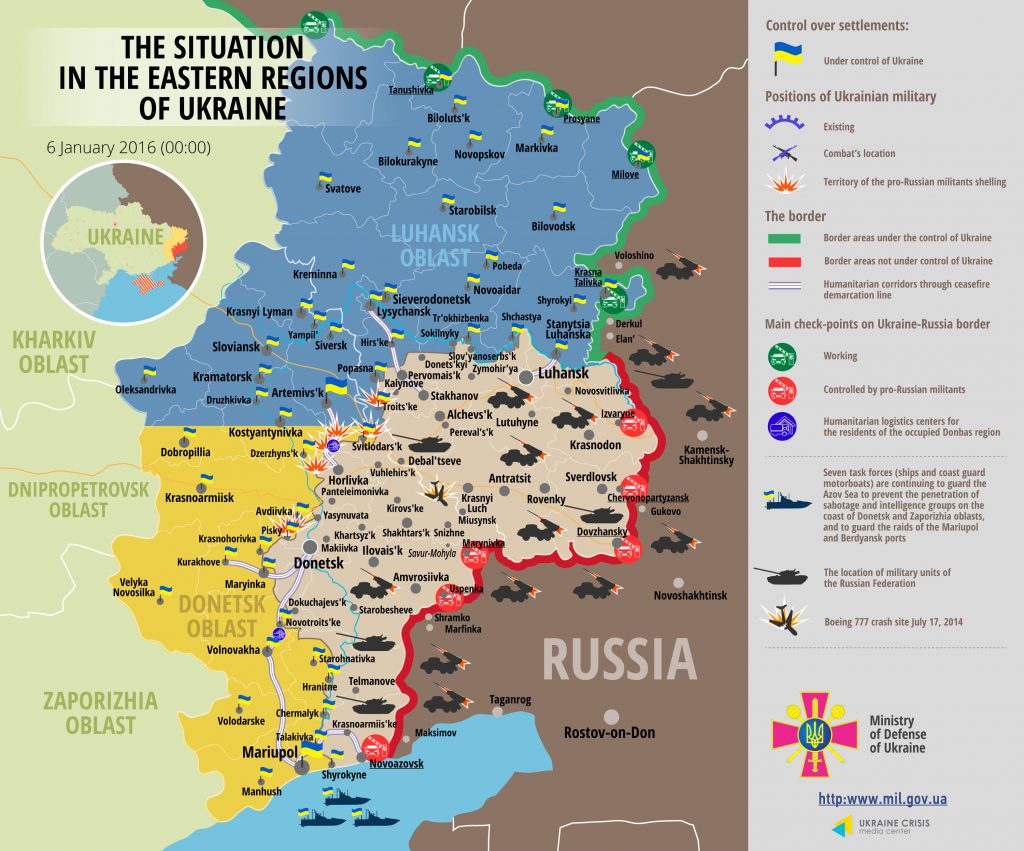 According to the spokesman, officers of the Ministry of Defense of Ukraine and servicemen of the Special Operation Department of the ATO Staff found a transmit antenna with equipment by an Internet provider sending signal from the temporarily occupied territories in Luhansk region. “Militants of the self-proclaimed ‘Luhansk People’s Republic’ (‘LPR’) used this equipment to pick up information from gadgets belonging to Ukrainian Armed Forces troops and local inhabitants. Moreover, the provider blocked Ukrainian web sites and forced users to view propaganda resources belonging to Russia and Russia-backed militants in the east. Officers identified that the network had been launched with the support of Russian special services,” informed the spokesman.

Ukrainian border guards detained a man near Stanytsia Luhanska, who was proceeding from Luhansk to Starobilsk avoiding all the checkpoints. “He had no identity documents. During checkup the detainee confessed that he served in the ranks of Russia-baked militant groups. The citizen was handed over to National Police officers in Luhansk region,” summarized Col. Lysenko.