Kyiv, January 12, 2016. Situation in eastern Ukraine escalated over the last day. “Adversary used heavy weapons in several parts of the front. Nevertheless Ukrainian troops incurred no casualties over the last day, not a single serviceman was wounded in action,” said Colonel Oleksandr Motuzyanyk, spokesman of Presidential Administration on ATO-related issues at a press briefing at Ukraine Crisis Media Center. In the Donetsk sector ceasefire violations by militant groups are being registered at the Svitlodarsk salient. “Thus the adversary conducted a short-lasting mortar attack near Troyitske. Militants were firing several times from grenade launchers and small arms south of Luhanske,” noted the ATO spokesman. There was a combat engagement between ATO forces and militants north of Horlivka between Semyhirya and Novoluhanske yesterday. After exchange of fire, militants stepped back to the south. Low-intensity combat actions continue west of Horlivka and in the area of the Donetsk airport, heavy weapons were not used. “Most long-lasting militant attacks upon our positions took place west of Novhorodske and near Opytne,” noted Colonel Motuzyanyk. 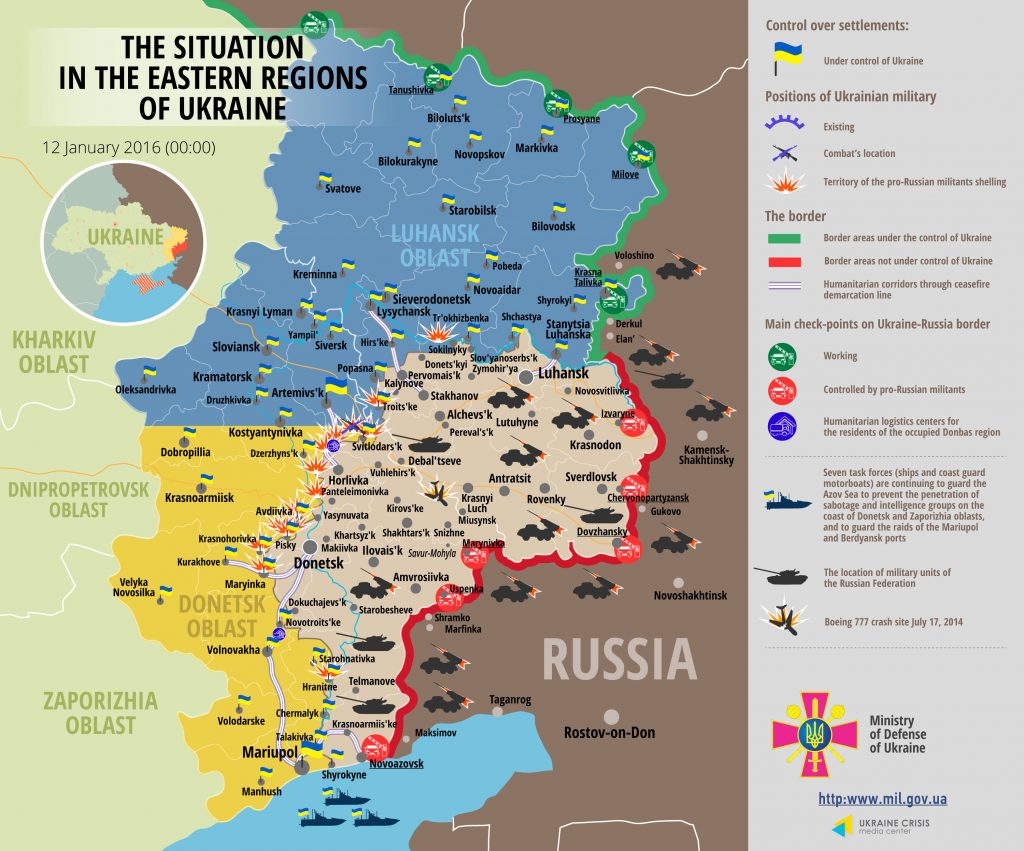 Combat actions restarted in the Luhansk sector. “Adversary fired upon Ukrainian positions near Krymske from 120-mm mortars. Another stronghold in the same area came under hostile fire from grenade launchers a bit later,” said Colonel Motuzyanyk. In the Mariupol sector militants violated ceasefire in several parts of the front. “Militants fired 10 mines from 120-mm mortars near Vodyane. Militant provocations also took place on south-western outskirts of Donetsk (in Maryinsky district) and near Hranitne,” said the ATO spokesman.

Main Intelligence Directorate of Ukraine’s Defense Ministry reports that the conflict between militants and regular Russian troops is growing stronger. “One of the main reasons for that is decrease of remuneration for mercenaries from the self-proclaimed republics,” said Colonel Motuzyanyk. According to intelligence reports about 300 militants from the so-called 5th motor-rifle brigade – former “Oplot” group have resigned. “Militant leader Zakharchenko of the so-called “Donetsk People’s Republic” (“DPR”) ordered commanders of the so-called ‘1st and 2nd ‘DPR’ army corps’ to cease payment of bonus for participation in combat actions effective January 1,” said the ATO spokesman. “To avoid deserting passports are being collected from militants. This fact was confirmed by militant nicknamed ‘Komissar’ who was recently detained by Ukrainian intelligence,” added Colonel Motuzyanyk.

Ukrainian law enforcement staff detained two persons who were collaborating with militants of the self-proclaimed republics. One of them was member of ‘Sparta’ militant group, he has been standing guard at militant checkpoints and repairing military equipment since June 2014. Second man was detained in Sloviansk. He took part in combat actions since April 2014 as part of the “Rus” militant group, after his unit suffered heavy losses he did not take part in combat actions any longer and was hiding from law enforcement officers.

Law enforcement staff discovered caches with weapons in several towns nearby the contact line. “Two RPG-26 grenade launchers and 20 F-1 grenades were seized in Dobropillya in abandoned industrial premises. Two more caches with RPG-22 grenade launcher, 12 F-1 grenades and ammunition rounds were discovered near Ochertyne, Donetsk region,” said Colonel Motuzyanyk. While checking the passengers at a bus station in Kurakhove, Donetsk region police seized 15 hand-held grenades from one of them, 11 more grenades were discovered while later searching his house. Another arsenal was discovered in Shchastia. “Entrance to the premises was mine-infested. Only after neutralizing the tripwire policemen were able to get inside where they actually discovered the cache. Antipersonnel mine, nine combat grenades and 80 ammunition rounds for automatic weapons were seized from it, said the ATO spokesman.