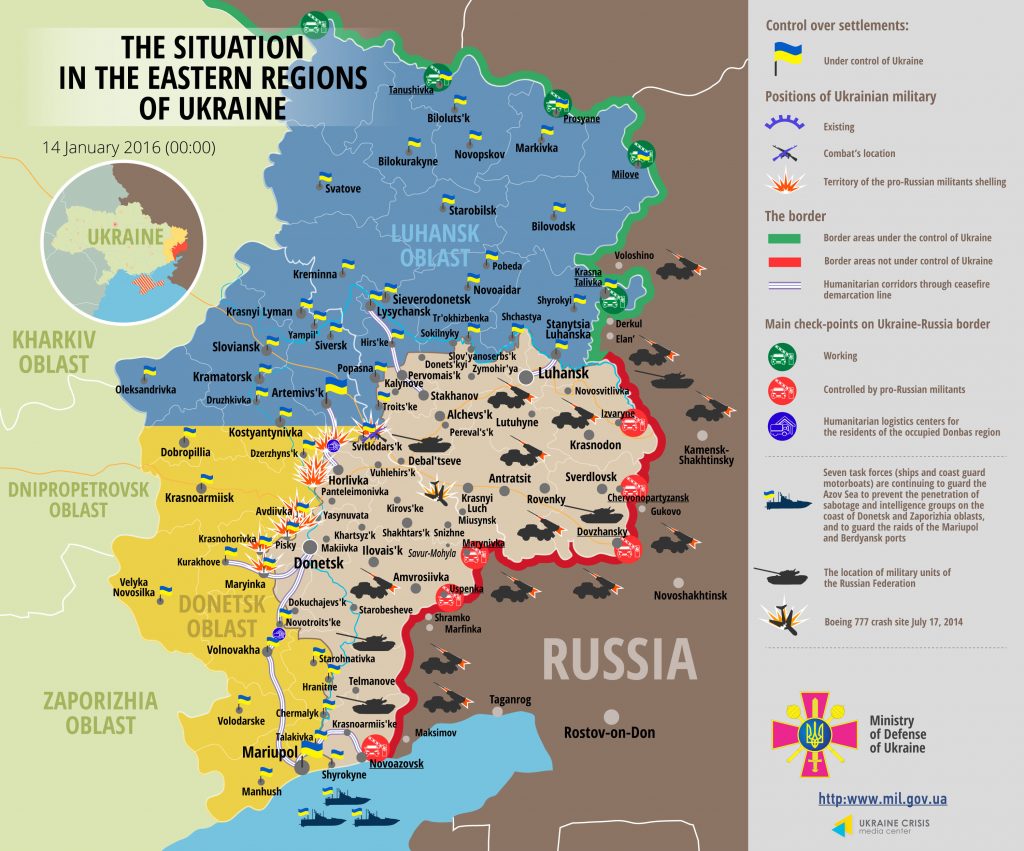 Most tense situation was observed in the Donetsk sector. “Adversary was firing upon Ukrainian positions south of Troyitske and Luhanske several times over the last day, mostly in the day time. There was also a short-lasting combat engagement in this area between ATO forces and a small hostile group,” said Colonel Motuzyanyk. Number of provocations has gone up in the Horlivka agglomeration, namely in Zaitseve, Mayorsk and Novhorodske. “Thus a short-lasting mortar attack upon Ukrainian positions took place in Zaitseve. Adversary used only small arms and grenade launchers of various types in other parts of the front,” noted the ATO spokesman. Militants used mortars in Opytne, in the area of the Donetsk airport. Minor provocations by militant groups were registered at all frontline positions of ATO forces.

In the Mariupol sector militants used small arms east of Krasnohorivka and Mariinka. Combat actions were not conducted in the Luhansk sector. Two Ukrainian servicemen were wounded over the last day, their truck hit a mine near Mariupol. “Ukrainian troops incurred no other losses over the last day,” added the ATO spokesman.

OSCE Special Monitoring Mission bolsters its capacities in Donbas. Thus, two mission’s forward patrol bases will start operating in Krasnoarmiysk and Svitlodarsk on January 14. “Monitor teams will be constantly present at the positions, they will rotate on a weekly basis. It will enable the mission to quicker register ceasefire violations in this part,” said Colonel Motuzyanyk.

Ukraine’s Security Service detained three persons – militant group members and those who collaborated with them. “Militant from ‘Oplot’ group was detained by Ukrainian law enforcement when he was trying to illegally cross the contact line near Donetsk. Another perpetrator was detained in Slovyansk. It was discovered that he got recruited by the Russian militant nicknamed ‘Zver’ in spring 2014,” said the ATO spokesman. Third one was detained in Kramatorsk. When Kramatorsk was occupied he was standing guard at the checkpoint in front of the city council.

Law enforcement staff also discovered and seized three hand-held grenades and about 200 ammunition rounds of various calibers in Lysychansk. Over 400 rounds of ammunition for automatic weapons, hand-held grenade launcher and two TNT blocks 200g each were discovered in a garage in Severodonetsk hidden in a car. “Militants of the so-called ‘Luhansk People’s Republic’ (‘LPR’) group stole the vehicle in question in summer 2014 when the car shop was being transferred from Lysychansk,” noted Colonel Motuzyanyk, The car was returned to its owner. Ukraine’s Security Service succeeded to prevent an attempt to smuggle a large sum of money to the temporary occupied territory. “Several vehicles were detained at Zaitseve checkpoint, they were carrying USD 450 thousand and RUB 12 million,” said the ATO spokesman.