Kyiv, January 17, 2016. A sniper shot at vehicle of the OSCE Special Monitoring Mission (SMM) in Maryinka yesterday. SMM representatives remained unharmed. The monitors arrived to the contact line in order to support restoration of the damaged gas pipeline, as there has been no gas supply in Maryinka for six month now.

OSCE SMM representatives, as well as officers of Ukraining party of the Joint Center for Control and Coordination, military engineers of the State Emergency Service and officers of civil military cooperation were supposed to guarantee the repair crew safety. Spokesperson of the Presidential Administration on ATO related issues, Colonel Oleksandr Motuzyanyk provided this information at a press briefing at Ukraine Crisis Media Center. 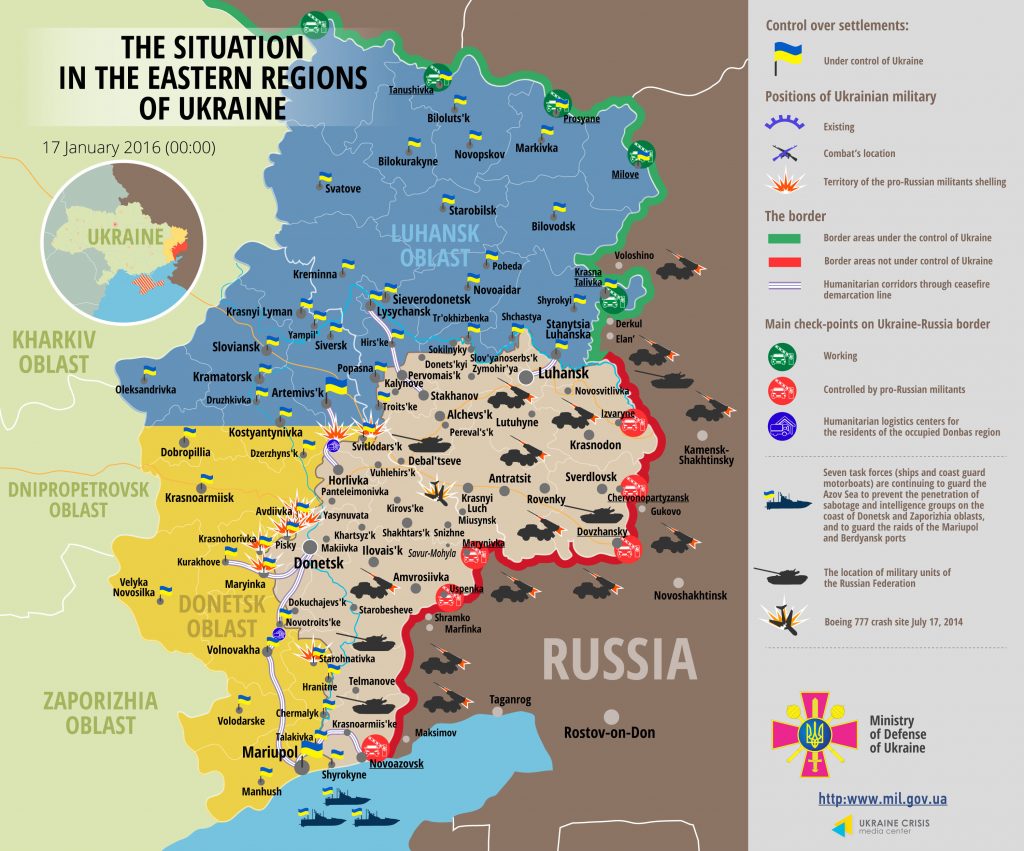 According to Col. Motuzyanyk, militants used BMP-1 armoured personnel carrier several times, as well as anti-tank guided missiles and small arms at the Svitlodarsk bulge in the Donetsk sector. The situation was comparatively calmer near Horlivka. Militants violated the armistice only in Zaitseve. “The situation remains steadily strenuous in the vicinity of Donetsk airport. For instance, insurgents attacked our positions from BMP-2 armored personnel carrier in Opytne. Moreover, a series of armed provocations involving use of small arms and grenade launchers of various types took place along the entire front line from Avdiivka to Pisky,” said Col. Motuzyanyk.

Militants violated the ceasefire in the Mariupol direction in Krasnohorivka, Mariinka and Starohnativka using small arms. According to the spokesman, Ukrainian Armed Forces incurred no casualties in combat yesterday. The armistice fully held in the Luhansk sector.

One militant joined the Ukraine’s Security Service (SBU) program “You are waited for at home”. Ukrainian law enforcements detained another former militant in Kramatorsk. It has been established that “the militant received no funds for his service and went to Russia in early summer 2014. Former militant found no happiness there, so he came back home and was detained by law enforcements,” explained Col. Motuzyanyk. Moreover, the SBU found a Russian special services agent in Rivne region. He was supposed to prepare a conspirative apartment for 5-6 subverters and establish relations with local criminal authorities. Moreover, the criminal was supplying information on location of Ukrainian troops and military objects in the region.

The spokesman informed that Ukrainian troops delivered 200 food packages of targeted aid, as well as letters and newspapers to residents of Zaitseve and Mayorsk.